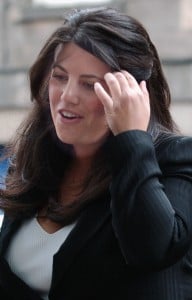 Monica Lewinsky in a file photo from 2004. (Robert Paterson/Reuters)

Monica Lewinsky’s return to the limelight this week in the pages of Vanity Fair provoked plenty of scorn from pundits who can’t seem to shake their impression of the former White House intern as a sad, foolish, lovesick vixen who’d do anything to land a magazine feature, not to mention the man in the Oval office. New York Times columnist Maureen Dowd won a Pulitzer Prize painting this less than kind picture.  Dowd covered the Bill Clinton/Monica Lewinsky affair more than a decade ago, with tactics many in today’s feminist crowd would call “slut-shaming.” (Ironically, feminists at the time of Clinton’s presidency skewered Lewinsky and defended the Commander-in-Chief, possibly because although his personal conduct with women was arguably sexist, his policies were anything but.)

In one memorable analogy, Dowd compared Lewinsky to Glenn Close’s psychopathic character in Fatal Attraction, a spurned mistress who attacks her lover with a kitchen knife and boils his daughter’s pet rabbit on the family stove. Today, Dowd is considerably less harsh on “That Woman”, but she isn’t exactly nice. Lewinsky’s return to public life, Dowd writes in the New York Times this week, feels like “a Golden Oldie tour of a band you didn’t want to hear in the first place.”

For someone my age though, it feels like a tour of a band you barely heard at all.

I was eight years old in 1998, when President Bill Clinton admitted he had had an “improper physical relationship” with Monica Lewinsky. The only thing I remember about the scandal, besides learning what a blow job was (a confusing name for an activity that involves no blowing) is that Lewinsky had, according to the women in my life, “a really bad haircut.” If aliens had arrived on earth in 1998 and asked me to sum up the state of the world in a few sentences I might have said: “There is a lady in America giving blow jobs. She has bad hair. Titanic won Best Picture.”

I wouldn’t, however, have mentioned the President of the United States—whom I’d confuse for many years to come with John Travolta—because he wasn’t the public sacrifice at hand; Lewinsky was. At eight, I could have picked Monica Lewinsky out of a crowd, no problem, but I wouldn’t have been able to identify Slick Willy standing in my own living room. She was crucified. He was saved.

It’s a strange thing being reacquainted as an adult with forbidden sound bites you heard so close to kindergarten. At 40, Lewinsky’s current story is uniquely sad because it feels as though, in 1998, she only just missed the cultural cutoff—when whoring oneself out to the public morphed from déclassé to instant cool; when rampant over-sharing on the Internet made sexual showmanship and genuine talent interchangeable currencies in the popular culture. The flow of information became so pervasive and fame so fickle in the early 2000s that people no longer seemed to care what you were known for; only that you were known at all.

Lewinsky is “stuck”, argues my colleague Anne Kingston, “between old and new media.” Old media condemned her and new media had no role in shaping her persona, and thus has no vested interest in condemning or defending her. She seeks the validation of both and gets the respect of neither.

I turned 25 last week—the age Lewinsky was when the White House scandal broke—and I’m confident that were I to have an affair with President Obama today (or, it must be said, Stephen Harper) public knowledge of the tryst, and the obligatory media frenzy and legal trouble to follow, would not preclude my launching a successful handbag line, or earning the respect of my peers and the public at large. Come of age in the early 21st century, and it’s a no-brainer that sex scandals don’t break careers; they make them. And you don’t have to devolve into a strange and tawdry joke—as Tila Tequila did—post-sex tape or leaked phone tap. Ask an eight-year-old girl today what Paris Hilton or Kim Kardashian is famous for, and chances are she will have no idea that either rose to fame on the updraft of her sexual exploits.  Sometimes, even I forget.

Slut shaming, or the double standard as it was called in simpler times, is no less prevalent in the 2000s than it was in 1998, but its result is. Kardashian and Hilton were shamed considerably when their explicit tapes hit the web, but they turned their humiliation to gold almost overnight. It’s been 16 years since Lewinsky’s public shaming, and she still can’t—by her own admission—get a desk job, let alone a profitable TV show. Yet if she had become the face of the presidential blow job only a few years later, who knows?  Maybe she’d be married to Kanye West. Forget Vanity Fair; she’d have the cover of Vogue—and a ticket to the White House Correspondents’ Dinner.

Lewinsky’s inability to reenter the world as a glowing success, beret and blue dress behind her, isn’t, in the end, a direct result of the choices she made, but of when she made them. She’s not a predatory slut or a “narcissistic loony toon” (as Hillary Clinton is rumoured to have called her). She’s just an imperfect reader of trends. And a perfect victim of the times.