More Emmy Thoughts; Also, Worst Episode By a TV Show In Its Prime? 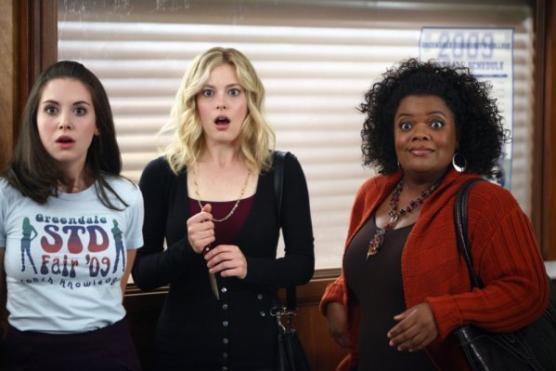 Not much TV stuff to post today — except about the Emmy nominations, which are just not all that interesting. One thing I forgot to mention in my post below, though, is that the show I’m most worried about based on the nominations is Community. Most shows’ survival is not dependent on Emmys, but 30 Rock has proven that a show with low ratings can survive based on Emmy love. It’s not an absolute thing; Fox had to cancel Arrested Development eventually (but even that show might have lasted longer if it hadn’t lost the Emmy in its second season), but on a weak network like NBC, it’s just possible for shows to hang on if there’s a perception that they bring in some prestige.

What I’m getting at is that Community will need a lot of things to go right if it’s going to make it to a third season, and its Emmy shutout may make the network less inclined to stick with it. I certainly hope I’m wrong, but the ratings are bound to be low, due to the doubly difficult time slot (leading off an evening and up against very tough competition). That means it will come down to a question of whether the network considers it important enough to protect, the way they protect 30 Rock; the lack of Emmy nominations could be a data point against it, suggesting that it isn’t really respected by The Industry(tm). Again, I hope I’m wrong.

I’d say that Parks & Recreation has a stronger hand to play, which is an odd thing to say because the network didn’t even have enough confidence in it to bring it back in the fall. But that show, while it didn’t get the Best Comedy nomination it deserved, did at least get a major acting nomination for a performer, Amy Poehler, who is important to the network. (Though not for Nick Offerman, who is the best thing on the show.) That makes it closer to a prestige item for NBC. And coming back in mid-season may help it hang on; the precedent is CBS’s Rules of Engagement, a comedy nobody really likes or hates, but which has gotten a longish run based primarily on being a perennial midseason replacement for the network’s flops. P&R could quite possibly hang on and replace shows like Outsourced for a while.

Speaking of comedies, and to go over to another network, ABC has announced that its new fall comedy Better Together has changed its title to Better With You. (The show has already had other titles in development, including “Leapfrog,” which sounds like an even worse animal-related title than “Cougar Town.”) As I said about Rookie Blue, a title change can sometimes work — if the title is improved in the process. A last-minute title change that doesn’t make the title any better, on the other hand, has got to be a warning sign. It seems to be a show with some potential, mostly because of the casting, but as the network’s only multi-camera comedy it’s in a difficult position already — if it under-performs, the network will be inclined to drop it much more quickly than an under-performing single-camera show — and the sudden, pointless title change doesn’t suggest the network has a lot of confidence in it.

Finally, here’s a TV question I’ve been thinking about: what is the worst episode by a hit show in its prime? By “in its prime” I don’t necessarily mean creative prime; I mean in the prime of its popularity: a show that produced a truly appalling episode while it was still a huge hit, as opposed to bad episodes produced after the show has already lost its popularity.

To me, there’s one episode that stands out; when I was younger I saw this episode of Happy Days about Al Molinaro being cursed by some crazy old lady who wore an eyepatch and made a voodoo doll in his image. It had some of the worst acting, music, writing I’d seen, yet when I looked it up later I discovered that Happy Days was the # 4 show in America at the time this episode aired (the sixth season). Granted, since Happy Days invented Jumping the Shark (see below) there’s a lot to choose from, but this one just kind of stuck in my mind as the ultimate horror of what a once-good show could produce while it was still a hit.

There are others that come to mind, of course, like some of the more problematic 24s, and then there are the hit shows that were never very good to begin with and therefore offer lots of bad episodes right out of the gate. But do you have any episodes that make you wonder how that show could possibly have been a hit at the time?