Both Murdochs have contempt for everyone, but James' contempt is smug, while Rupert's is angry

As I write this, I’m still watching the live stream of Rupert Murdoch and James Murdoch testifying before the UK Parliament. And so the pie attack happened right in the middle of my writing it. That was weird. The effectiveness of pie throwing as a political act has always escaped me; since it’s inspired by the Three Stooges and other slapstick comedy, it seems to be a way for ordinary idiots to get close to wealthy dowagers (or whatever you call a male dowager) and invade their space. But Three Stooges shorts don’t have much political significance and neither does this.

All the pie thrower succeeded in doing was changing the focus of the conversation from “Rupert and James Murdoch aren’t doing so well” to “Rupert Murdoch is a victim and his wife is cool.” He helped the Murdochs tremendously, while thinking he was hurting them. The pie throwing was sort of an act of narcissism, which will have the opposite effect from what the pie-er probably wants. If it weren’t for him, the cable news chatter today would be about the scandals. Now it’s about pie. 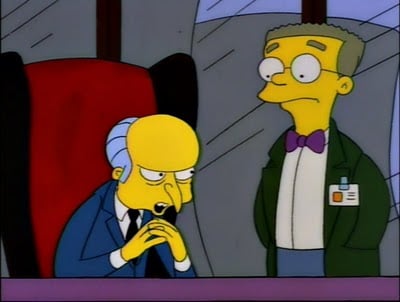 Before the Pie Man became the star of the proceedings, the thing most people seemed to be talking about was that Rupert and James acted a lot like two of News Corp’s most beloved pieces of Intellectual Property, C. Montgomery Burns and Waylon Smithers.

Both James and Rupert have of course spent the morning denying everything and insisting they knew nothing. One of the weirder patterns of the hearing has been that James will be in the middle of a long speech about how little they knew, and then Rupert will interrupt him and say the same thing in fewer words. I get the impression the committee is liking Rupert better than James, just because James goes on and on and on and says nothing (all I really know for sure is that he’s not a lawyer, because he keeps saying “I’m not a lawyer”) while Rupert clearly hates their guts, but doesn’t waste their time.

The James-Rupert contrast is the most entertaining part of the show. Both have the same interests, both are sticking to the same story, but they project different personalities. The word a lot of people are using for James is “smarmy,” and he sure can be condescending to the people who ask him questions. A lot of “I understand where you’re coming from” and attempts to make it seem like we’d never accuse him if we understood the situation as clearly as he does. And his accent is a combination of every country where his family has business interests. He is the ultimate trans-national business scion who will patiently explain to us why we have no business questioning him.

Rupert’s manner is different. He bangs on the table to emphasize his words, sometimes every word in a sentence. He droops his head when he’s finished talking. His manner is gruff and contemptuous, and he only seems to be happy when he’s talking about the trashiness of his headlines or the backwardness of his competitors. Taking on “establishment” media in the UK, the U.S., and Australia is what Rupert Murdoch has always lived for; his whole thing is thumbing his nose at other publications and channels. (The Murdoch Wall Street Journal is a case in point: he saw it specifically as a way to take on the hated New York Times, and much of what he’s done with the paper is an attempt to get under the Times‘ skin.) Both Murdochs have contempt for everyone, but James’ contempt is smug, while Rupert’s is angry: even though he was born into wealth and got wealthier, even though he rubs shoulders with politicians everywhere, he still seems to define himself as an upstart who is fighting a battle against the powerful. He’s not, but that upstart pose is part of all his media outlets, and it seems to come from the man himself. 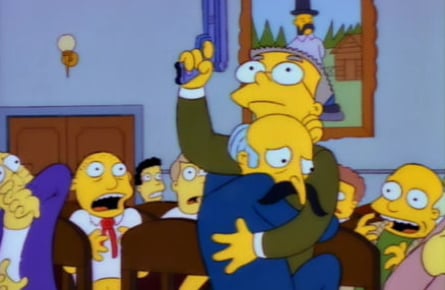 It also works better in testimony, I think, since James wound up looking really bad with his repeated denials and interruptions of the people he was talking to, while Rupert came off more as the angry old forgetful man. (Sometimes gaining comparisons to another Simpsons character, Grandpa.) Murdoch Sr. got the most unintentionally funny moments, like when he claimed he couldn’t remember saying something because “there were twenty microphones in my face.” Rupert Murdoch complaining that an aggressive media push may have caused him to be misquoted or quoted out of context – perfect.

Another favourite Rupert moment was his attempt to deny that he is “hands off” in running the company. The whole strategy here depends on him denying that he knew anything that was going on, you know it, he knows it. But he can’t bear anyone to think that he doesn’t have full involvement with what his company does, so he starts talking about how he works “10 to 12 hour days” and makes lots of big decisions every day. When someone says he was “kept in the dark,” Rupert contradicts him heatedly, saying “No one kept me in the dark!” But this particular paper, no, that he knew nothing about. The combination is implausible. He’d be much better off just saying he knew nothing about everything. But it’s as if he would rather contradict himself than sustain the blow to his pride that would come with us thinking he doesn’t do anything.

When I try to proclaim a “winner” it doesn’t usually work out (I once said Donald Trump was the winner in the Obama birth certificate thing), but I’ll try it again anyway. If the Murdochs don’t get through this well—and the pie incident increases the chances that they’ll get out of it intact—then the big winners will be Roger Ailes and Fox News. If they are implicated in the same scandals, or similar scandals, it may take years for it to come out, especially since Ailes is a bit separate from (and disliked by) Murdoch’s family. Meanwhile, with Murdoch’s UK interests teetering and the Wall Street Journal pulled into the thickets with Les Hinton, Fox News is reinforced as Murdoch’s most successful property, and Roger Ailes increases his power within Murdoch’s company.

It may not work out that way, but I think there’s a tendency to think that if Rupert Murdoch is in trouble, then Fox News might be in trouble too. That may not be the case; Fox News obviously does reflect Murdoch’s personality, but it also reflects Ailes’s, and the two don’t see eye to eye on everything. Fox News may come out of all this with more freedom to maintain an apocalyptic tone, not less.