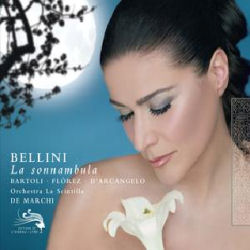 Opera superstar Cecilia Bartoli is probably the only artist with the sales clout to get a major corporation to invest in a studio audio-only opera recording. Since I love audio-only opera recordings (in many ways they hold up better on repetition than operas on DVD, because seeing the same thing over and over again is somehow more tiresome than just hearing it over and over), I’m glad that she was able to get Decca records and its parent company, Universal, to record her in Bellini’s La Sonnambula. This bel canto opera about a young woman who sleepwalks is revived fairly often, mostly because it is the perfect star vehicle: the female lead is practically the whole show — the tenor is also important, but not nearly as important as she is. Also, the heroine gets to spend much of her time lamenting and going mad (plus a few happy moments and, surprisingly, a happy ending), and there’s nothing a prima donna likes better than acting sad and/or crazy. So since the revival of interest in Bellini, there have been a number of revivals of the piece for singers who were famous and popular enough to sell tickets; Maria Callas did a famous revival in the ’50s at La Scala in Milan, conducted by Leonard Bernstein. Since she switched to the soprano repertory from her original mezzo-soprano range, Bartoli has been interested in paying tribute to the great divas of the early 19th century, particularly Maria Malibran, who was the subject of her last recital album. Here she continues her Malibran tribute by using cadenzas that the Italian superstar (who was born in 1808, 200 years ago) used when she sang Sonnambula. And the orchestra uses period instruments, which not only creates more of an authentic 19th century sound but gives a little more of an edge to Bellini’s music, which can often sound sappy by comparison with the more macho operas of Rossini or Verdi. (Because Bellini’s operas usually concentrate on suffering women and give short shrift to the men, he’s sometimes thought of as kind of a “girly” composer, particularly by male fans who seek more violence and toughness in opera.) The recording is well-produced, well-thought-out, and Decca has partnered her with its star tenor, Juan Diego Florez.

But I can’t be too enthusiastic about this recording, and the reason is Bartoli. Not everyone feels this way. Robert Everett-Green in the Globe and Mail gave the recording a rave review, calling it “definitive.” But to my ears, she’s not actually singing any more, at least not in the sense of actually putting her whole voice into a phrase. Instead she’s crooning, muttering, quavering and anything else except the kind of balls-out, energetic singing that this opera needs to be entertaining. It’s not about the size of her voice or the volume she produces; she’s always had a small voice, but at her best, she’s made up for that (at least on records; on stage, her lack of volume is more of a problem) with charm and directness and technical skill. But listen to her singing the most famous aria from Sonnambula; I hear interesting touches, but I don’t really hear her singing the melody — it’s a succession of notes, each one coloured and produced in a slightly different way, and she seems to mistake fluttery whispering for soft singing. And it creates the sense that she’s holding something back and refuses to sing normally. Opera doesn’t need that kind of over-interpretation, particularly an opera like this where the characters aren’t exactly complicated. What it needs first and foremost is for the singer to sing the music and let her interpretation flow from there. That’s what Maria Callas did: she didn’t have a great voice, but she always made sure to sing the music without fussiness or frills, and only then add “interpretive” touches.

Compare Florez, the tenor, who also has a smallish voice and doesn’t sing particularly loudly, but is clearly singing a song, not just singing notes. His performance is much more satisfying than Bartoli’s because it’s more musical and tasteful, and he’s not holding back.