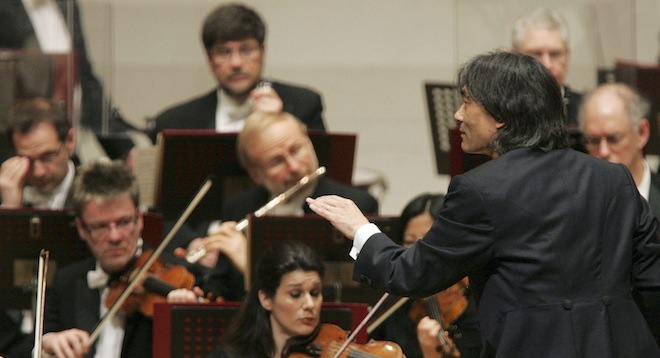 From La Presse‘s Claude Gingras, who knows everything, comes the news — un-denied two days later — that Kent Nagano, the music director of the Orchestre symphonique de Montréal, will leave town when his second contract expires in 2016.

It’s a bit of a surprise. Nagano will have been leading the orchestra’s fortunes for 9 years when the 2015-2016 season ends. Charles Dutoit, who made it one of the world’s leading orchestras and then left (in an awful huff at the musicians’ union) in 2002, had lasted 25 years. Nagano will be 65 in 2016 and could have lasted many more years. He’s just finishing a second season at the new Jack Diamond-designed Maison symphonique, a bland-looking but superb-sounding hall Jean Charest built partly to keep Nagano happy. His Montreal career looks a little foreshortened.

I hear through the musicians’ grapevine that Nagano is not universally loved by the OSM. He is seen as a micromanager who doesn’t let the players bring enough of their own insight to the music. But I doubt that would have counted for much in the board’s decision about his continued tenure. Lucien Bouchard chairs the orchestra board and he’s a close Nagano ally, and for good reason: the concert plays to near-constant sold-out houses (helped by the fact that the Maison symphonique is hundreds of seats smaller than Salle Wilfrid Pelletier, the band’s old venue). And Montrealers are still over the moon about Nagano. It’s an extended crush that you have to see to believe.

Partly it’s canny marketing by the orchestra management. The OSM was a global symbol for Montreal when Dutoit was putting out hit CD after hit CD for Decca in the 1980s, and the arrival of Nagano, after a few nasty years of drift and labour unrest, gave the management a chance to put the OSM back on the map, at least locally. (Tours to South America in a month, then Old Europe and China in succeeding seasons, will make it clear how far Nagano has brought the OSM toward its former glory.) Big concerts, including Nagano’s debut as music director and the inauguration of the new hall, became multimedia spectacles, broadcast on Radio-Canada TV and radio, beamed to waiting crowds on video screens outside the hall. But the maestro played the game willingly and well. Nagano would put on a Habs jersey at the drop of a puck and would perform at the Bell Centre, at old folks’ homes, and anywhere it might improve goodwill for the orchestra.

None of it would matter if he hadn’t been making excellent music. He sure has. During the 2013-2014 season he’ll finish recording the Beethoven symphonies; the ones he’s released so far, especially the Third, are dashing and sleek. When he releases them all in a box it will get a lot of attention. (Also don’t overlook his recording of two Beethoven concertos with pianist Till Fellner.) He’s done a hell of a lot more than Beethoven. He is a highly creative concert programmer.

The upshot of the Nagano ascendancy has been something I’ve wanted to write about for a while now: Montreal has become just about the only big city anywhere where Kent Nagano is a bigger deal than Yannick Nézet-Séguin. Yannick, of course, conducts Montreal’s traditionally less prestigious Orchestre Métropolitain, which he took over when he was barely past 20. In the last five years he’s become one of the most swooned-after conductors on earth, revitalizing the Philadelphia Orchestra, recording (crazy amounts) for Deutsche Grammophon, and a lot more. He has many strong nights in Montreal, where he returns out of loyalty to his home and to the little institution that made him more than out of any career logic. There are critics, including the above-mentioned Gingras at La Presse, who do not hide their preference for Nézet-Séguin over Nagano as an interpreter. And yet in Montreal, perhaps because YNS started there and is still seen as a local boy, Nézet-Séguin does not get talked about outside music circles as often as Nagano does.

A few years ago I attended the season-opening concerts of the two orchestras, days apart in the same hall. Stupidly I didn’t write about the concerts immediately afterward. They were as different as cricket and golf. Nagano conducted the Berlioz Requiem with a huge chorus. There were solemn speeches to open the season and the evening had an austere mood to it, even before the orchestra played (stunningly, as it turned out; on a bad night they can be snappy but emotionally arid). Yannick conducted something less unusual, whose details I’ve forgotten. It was like a family picnic. Nézet-Séguin spoke before the concert to congratulate two board members on their 50th wedding anniversary. Patrons were handed scraps of paper on which to send the conductor their wishes on his 10th anniversary leading the orchestra. There was a lot of tu and toi in the opening remarks. Hearing the OSM was made to feel like a privilege. Hearing the OM was made to feel like a hug. I hope Montreal music fans know how lucky they’ve been in both cases.

My hunch is that it’s Nagano, not the orchestra board, who is deciding on this early-ish and amicable divorce. His parallel career in Germany is a moving target: he finishes at the Bavarian State Opera this year and begins at the Hamburg State Opera in 2015. He’s moving on. Who could replace him? It’s a crucial decision for any orchestra. Montreal will now be looking for a music director at the same time as Boston and Berlin. Millions of dollars, and a municipal pride that in Montreal extends far beyond the poncy elites you might expect to worry about such things, ride on the outcome. The OSM got lucky with Nagano. It needs to get lucky again, sooner than it probably hoped.