MUSIC: Mozart, The Generation Gap, and The Gods 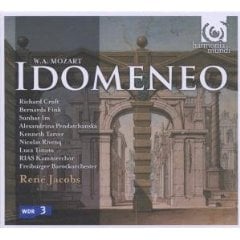 Mozart’s first great opera, Idomeneo, is getting more attention lately; the very fine new recording from Harmonia Mundi and its star conductor René Jacobs (the cover of the recording is pictured above) is the first recording of it in several years, and the Canadian Opera Company will be performing it in the upcoming season. The new recording is one of the best available, and last time I was at L’Atelier Grigorian in Toronto the set (3 CDs and one bonus DVD) was being sold for the price of two regular-priced CDs. Those of you who saw Amadeus may remember that it is mentioned only as a “promising” work, but like everything in that movie, it fudges the facts a little. By the time he wrote Idomeneo, Mozart was no longer a promising young prodigy; he was 24 (which at that time wasn’t unusually young for a composer). Most of his previous operas had been the work of a composer with potential; with this opera, Mozart had finally developed into a really great composer, and he poured just about everything he had into the writing of it, using it as a showcase for all that he’d learned in his musical life.

He had some issues with the libretto; it was an Italian opera seria, and the conventions of that form meant that most of the characters had to be noble and pure, there had to be a lot of talk of the Gods, and there had to be a happy ending. But the story is quite interesting for all that; I’ll recap it further down in the post, but first, more on the music: Mozart made this story more theatrical and alive than most operas with similar stories (one of the reasons why it gets revived more often than most such operas). In purely musical terms it may be the best thing Mozart ever wrote; every number is an amazing display of musical technique. Every number is also incredibly difficult, both for singers and orchestra. For the singers he wrote such elaborate coloratura parts that some of them couldn’t handle it, and some numbers had to be simplified for early performances. The orchestra has a much bigger part in this opera than was common at the time; other composers had tried to increase the prominence of the orchestra, but they didn’t have Mozart’s skill as a writer of orchestral music. In some numbers from Idomeneo, he uses the same techniques he’d used in his concertos, making the singer the solo instrument in conversation with the orchestra. In a famous second-act aria for the soprano, Mozart makes the number a dialogue between the soprano and the woodwind section.

Here’s an example of the rich orchestral sound and exceptional imagination in the piece. It’s a number for Electra, the daughter of Agammenon, who in this particular story is not helping to kill her mother but just has a very deranged crush on the hero, Idamante. It starts with a recitative where she sets out the situation (she wants Idamante, he loves Ilia, she’s upset). At the 1:50 mark, this leads directly into a ferocious aria where she swears that nothing is left in her but “vengeance and cruelty,” with music that is as crazed and wild as anything Mozart ever wrote. Then at the 4:30 mark in the clip, Mozart runs the end of the aria without a break into the next scene, where Idomeneo’s crew is lost at sea during a storm and praying to the gods to save the ship, and the music now suggests both the waves and the storm. So the music that is suggestive of internal torment is transformed into music about an external threat, the storm — which not only creates a great theatrical effect, like a direct cut in a movie, but binds together the themes of the story: it’s about human emotion and the threats posed by the natural world, which in this story means the gods.

This performance is by the personnel from the recording: conductor Jacobs, the Freiburg Baroque Orchestra, the RIAS Choir and soprano Alexandrina Pendachanska, who will be appearing at the CoC this coming season (in another opera, Donizetti’s Mary Stuart). The performance is not actually taken from the recording but from a broadcast of a concert performance that preceded it; the performance on the CD is very similar to the one given here. (Which is one advantage of making recordings after a live performance: everybody has already rehearsed their performances and teamwork thoroughly.) But don’t worry: the recording doesn’t have as much of Jacobs’ humming and grunting as is heard here, though there is a bit of it (he’s a singer-turned-conductor, so he communicates by singing and humming, but his record producers have figured out ways to cut down on it).

As for the recording, I’ve listened to it a couple of times and I definitely recommend it if you like Mozart or opera or audio recordings of any kind. The best part of it is the contribution of Jacobs and the orchestra. Jacobs’ conducting of Mozart’s comedies can be controversial for his wild tempo shifts and noisy climaxes (I like them, though; he’s not dull, even when he’s weird), but Idomeneo is the kind of piece that, as a baroque specialist, he does best; he doesn’t try to make the music sound cute or proper, as many conductors do when handling all this gods-and-Greeks material; it’s all intense, passionate, but sensitive to what the singers need. The Freiburg Baroque Orchestra is an example of how German period-instrument orchestras are the best in the world; I don’t really know why this is, but they take chances that even the best period-instrument orchestras in Canada or England rarely do. The singers themselves are all good (most of them have worked with Jacobs in other performances and recordings), though they maybe hold back a little more than the conductor and orchestra do. Richard Croft, the tenor who plays the title role, has played the part many times for many conductors, and he’s a very fine singer — but not exactly a balls-to-the-wall, risk-taking, thrilling singer like the part really needs. Of course it’s hard to say if there’s ever been an Idomeneo who could do everything the part requires. (Star tenors like Pavarotti and Domingo have taken on this part, but they couldn’t sing the coloratura and had to use a simplified and shortened version of Idomeneo’s big number.) I can see why Jacobs likes using Pendatchanska, who sometimes sounds like she’s going to blow a vocal gasket but never sounds like she’s being over-cautious. The other singers have all done other recordings with Jacobs: Harmonia Mundi’s star mezzo Bernarda Fink as Idamante, the young Korean soprano Sunhae Im as Ilia (who is a little light-voiced but uses her voice very intelligently and often beautifully) and the American tenor Kenneth Tarver as Arbace, a pointless character with two gorgeous numbers to sing.

This is also a more-than-complete version, putting back all the material that Mozart cut before the first performance; it doesn’t really change much in musical terms, but it does make the resolution of the plot much clearer if you’re following along in the libretto (which is included, along with translations and notes).

On YouTube I found part of a promotional video created for the recording, which is available on a free bonus DVD with the CD set; Harmonia Mundi is starting to include more “making-of” documentaries with its audio recordings, a nice way for CDs to have special features the way DVDs do.

As for the story, the gist of it is that Idomeneo, the aging king of Crete, makes a vow to the God of the sea that if his ship is saved from being wrecked, he’ll sacrifice the first person he meets on the shore. That person turns out to be his son, Idamante. Idomeneo tries to get around the vow by ordering Idamante to leave the country, but Neptune sends a storm to prevent Idamante from leaving, and a sea-monster to wreak havoc in the kingdom in revenge for Idomeneo’s breaking of his promise. Idamante is willing to be sacrificed (even after he’s managed to kill the monster), but the girl he loves, the captured Trojan princess Ilia, offers to be sacrificed in his place. Neptune then appears and announces that love has triumphed: as a reward for their willingness to sacrifice for each other, Idamante and Ilia will rule Crete, and as punishment for breaking his promises, Idomeneo will be forced to abdicate. The story has a sort of generation-gap quality to it: Idomeneo is the old, superstitious king who believes in human sacrifices and the importance of war and violence. Idamante, who starts the opera by freeing all his Trojan prisoners, and Ilia, who is willing to overlook national boundaries and blood feuds to love a Greek, represent the younger generation, who believe love can transcend violence and cruelty, and in the end, the Gods agree with the young.