MUSIC: Some Recordings Worth Hearing

I still like CDs. (It seems weird that CD collecting is a nostalgia habit while LP collecting is a growth industry, but that seems to be where we’re heading. I grew up in the CD boom era, so I tend to prefer them to vinyl. And as for downloading, I just can’t quite bring myself to enjoy the idea of not physically owning something.) But whatever format you use to feed your music-listening habit, there are still some worthwhile classical recordings being released. Some thoughts on a couple of recordings I picked up recently. (Also: yes, the Beatles mono mixes are better than the stereo mixes, because, well, the stereo is just a mono mix split into two and divided between speakers. That’s the way a lot of pop was mixed in the ’60s, because nobody cared about stereo outside of classical.) 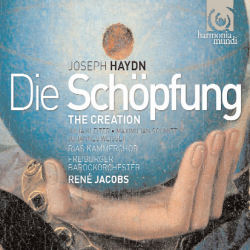 – Haydn, The Creation, Freiburg Baroque Orchestra, René Jacobs. I look forward to any recording by Jacobs, the countertenor-turned-conductor. There’s been a very mild critical backlash against Jacobs, because of his tendency to add things to the 17th and 18th-century pieces he records. In particular, critics get annoyed by the way he encourages the piano continuo player to improvise and comment on the action. But what I like about him is that a) he’d always rather be anything except boring, and b) He always tries to bring out the dramatic values in anything he conducts. That’s extremely important in Haydn’s oratorio, which one of Jacobs’ singers (in a making-of DVD that accompanies this boxed set) describes as “cartoon music,” with the orchestra constantly portraying the animals, water and even the state of non-being (the prelude is the “representation of Chaos” before the world was created). A conductor who tries to keep the music from sounding goofy or corny will just make it sound boring. Jacobs, like Leonard Bernstein in his great ’60s recording of this same piece with the New York Philharmonic, isn’t afraid of the extra-musical associations, like the bronx cheers from the trombones representing the beasts of the field.

If anything, Jacobs’ recording isn’t quite as vulgar or extroverted as I was hoping; maybe it’s the small size of the orchestra and chorus (Haydn preferred the piece to be done by large groups) or the sound balance, but sometimes the effect isn’t as powerful as other recordings, like Bernstein’s (the first recording, not his relatively boring remake) or the recent period-instrument versions conducted by Thomas Hengelbrock (on Deutsche Harmonia Mundi) and Andreas Spering (on Naxos). But Jacobs gets good work from his soloists, as he usually does — as a former singer, he knows how to get the best of singers — and encourages them to ornament their music more than most singers do (it was expected that singers would add things whenever the composer wrote a repeat). And there are some bits he does better than almost anyone, like the pizzicato chord after God says “let there be light.” (It’s weird to think that so many conductors could get this simple chord wrong, but many of them either bring it in too soon or make it sound too weak and indecisive — and when a chord literally represents the word of God, it had better sound strong.) The piece itself, of course, is wonderful, a celebration of the world, nature, and finally of love and pleasure between human beings (the fall of Adam and Eve is dismissed in about 20 seconds; what Haydn really emphasizes is that the world is a great place to be, no matter where you are). Here’s an excerpt from the 23-minute documentary that is included with the set: 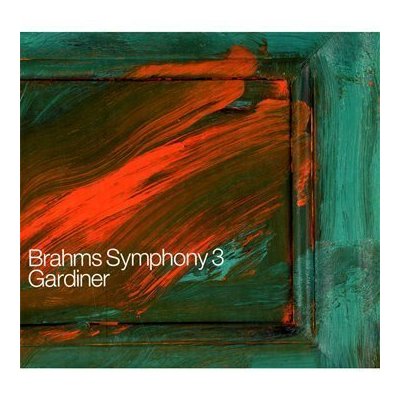 – Brahms, Symphony no. 3, Orchestre Revolutionaire Et Romantique, John Eliot Gardiner. Gardiner has been performing and recording the Brahms symphonies on period instruments (there has been one other period-instrument Brahms cycle on record, by Roger Norrington; it’s out of print) and filling the discs out with Brahms’s choral works, both his original pieces and arrangements of songs by others. This certainly makes for more varied and interesting discs than the ones that are filled out with overtures or something. (Brahms only wrote two overtures and one set of variations, so most conductors just use those, over and over, to pad out a CD.) This new recording of Brahms’s best symphony — the shortest, the most concise, and the most powerful — is the best in the series so far. The first two symphonies, while well done, didn’t offer a whole lot that you can’t get from the many previous recordings; the period instruments don’t add that much (since instruments in Brahms’s time weren’t all that different than now, except for some of the brass instruments). But Gardiner does have something to offer in 3 that most conductors don’t. Brahms marked the first movement “allegro con brio,” the same tempo marking as the opening movement of Beethoven’s fifth. Yet for some reason, almost every conductor takes this movement quite slowly; it’s one of those traditions that doesn’t make a great deal of sense, since a slow speed makes the movement sound a bit heavy and plodding. Gardiner actually bothers to do the first movement at a speed that sounds like “allegro con brio.” It makes the first movement more passionate-sounding and creates a better balance of moods within the whole symphony; the second and third movements are both kind of slowish, so with the traditional tempo for the first movement, the whole symphony sounds like it proceeds at the same speed. The main choral fill-up, Nanie, is one of Brahms’s most attractive choral pieces, and Gardiner’s chorus, the Monteverdi Choir, is one of the best in the business.