National Ballet's 'Alice' is a thing of wonder 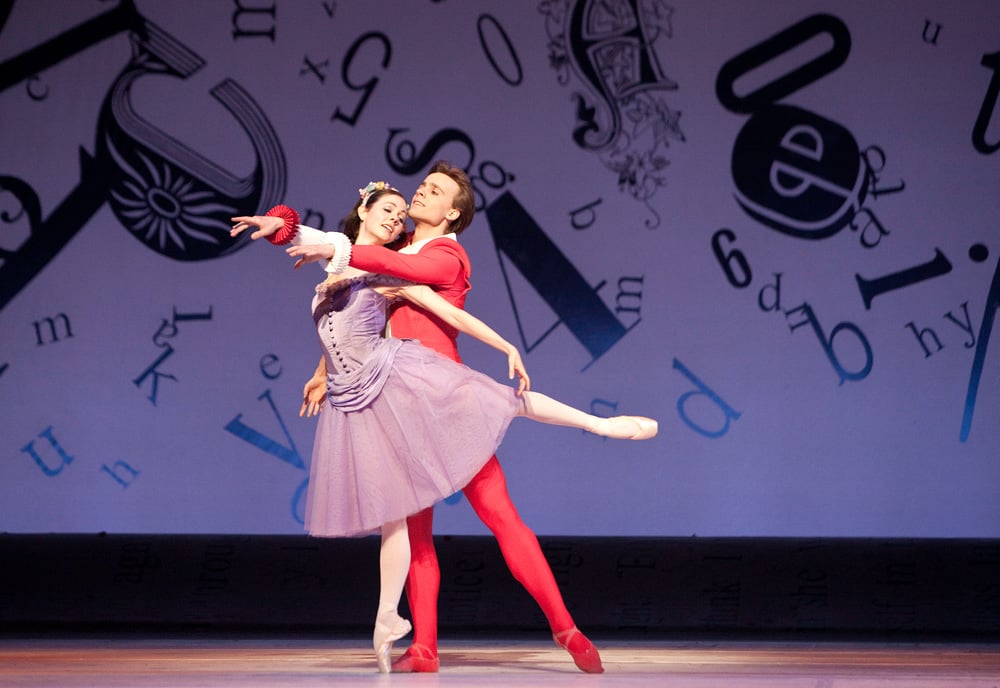 While most of the country watched the Vancouver Canucks take Game 2, I was at Toronto’s Four Season’s Centre, a witness to the thrilling premiere of the National Ballet’s Alice’s Adventures in Wonderland.  A co-production with the Royal Ballet, this is the most ambitious show ever mounted in the history of the Canadian company, and it’s stunning. Going beyond ballet, Alice is an exhilarating spectacle that combines the “wow” factor of a hit Broadway show with stagecraft wizardry that would be the envy of Robert Lepage. While wholly embracing classical ballet, this pop extravaganza uses cinematic projection, puppetry, tap dancing and a kaleidoscope of optical tricks to conjure the story’s psychedelic contortions. After the banality of Tim Burton’s recent 3D blockbuster, I thought it might be hard to get excited about Alice ever again, but British choreographer Christopher Wheeldon has tweaked the Lewis Carroll tale with a fresh, subversive touch while preserving its familiar elements—something he’s also done to the elements of ballet, which run the gamut from classical purity to vaudevillian farce.

Alice is conveniently transformed from a child to a teen in this rendition, and given a beau, allowing for the essential pas de deux. On opening night her role was danced by Jillian Vanstone, who’s not a principal with the company but who charmed the audience with a star-making performance that embodied Alice’s game curiosity. As her beau Jack/the Knave of Hearts, Zdenek Konvalina served as a robust and generous partner.  Aleksandar Antonijevic twitched and leapt into character as a very rabbity White Rabbit. And Greta Hodgkinson braved self-parody in as hilarious turn dealing the Queen of Hearts as a campy dance diva. But if applause is any indication, the ensemble’s biggest crowd pleaser was Royal Ballet guest artist Steven McRae, who tap-danced up a storm as the Mad Hatter, one of the show’s most virtuosic sequences. 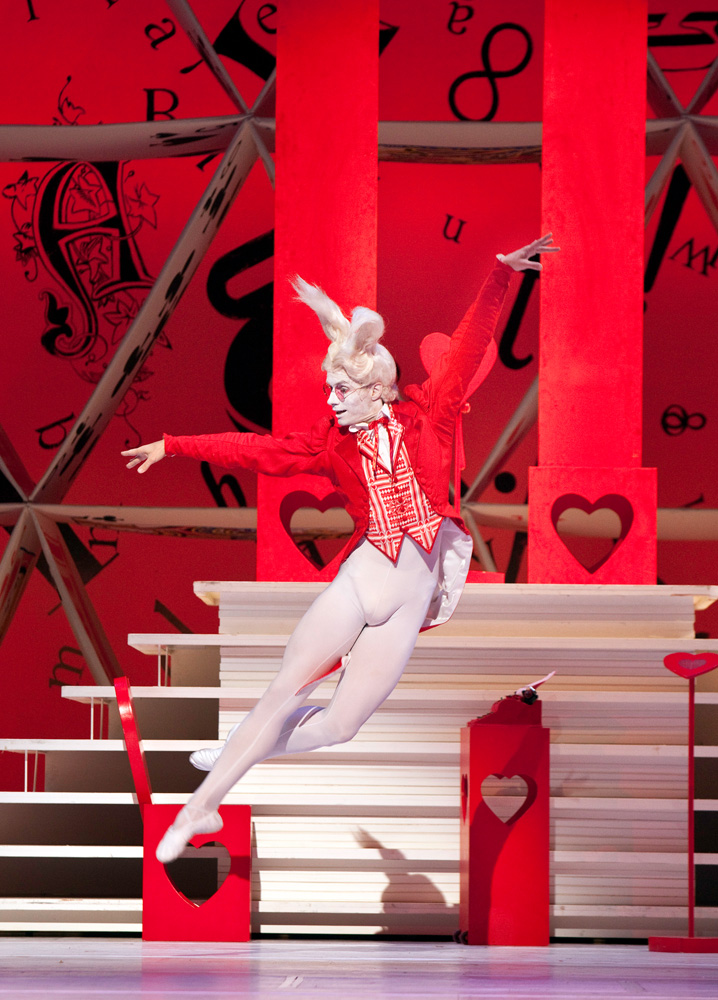 As a film critic who knows as much about ballet as I do about wine (zilch, but I can sense when it’s good), I was blown away by the production’s cinematic flourishes. Act I opens in a decorous period setting, on a summer afternoon in Oxford in 1862, with Lewis Carroll entertaining the three  Liddell Daughters, Lorina, Edith and Alice, as their father and his priggish wife prepare to host a garden party. With a photographer’s blinding flash, reality is shattered, the camera’s cloth hood twirls aloft like a sheik’s black headdress, and Alice plunges headfirst down the rabbit hole—which is projected as a spinning, Vertigo-like spiral, as Joby Talbot’s score accelerates with an adrenaline pulse worthy of Bernard Hermann. A dizzying repertoire of effects convey Alice’s magical transformations, virtually all through the use of scrims and projections. Again and again we succumb to a palpable sense of childlike wonder—how did they do that?An articulated cheshire cat, formed by blacked-out dancers serving as puppeteers, is one of more astonishing highlights. There’s also a cool retro wit to much of the staging, with pop tableaux on a par with James Bond credit sequences. Most inspired are the playing card sequences, with dancers sporting black and red tutus in cut-out shapes of hearts, diamonds, clubs and spades. The staging, the choreography and the score all span a vast repertoire of styles, as each scene becomes a self-contained showpiece in an episodic spectacle.

Apparently there was one bit of stagecraft that failed to materialize—a tower of cards—something artistic director Karen Kain pointed out at a celebratory cocktail across the street after the performance. Beyond the cast and crew, none of us knew it was missing, and none of us cared. Apparently the National Ballet achieved this complex feat of production under great duress, with a punishing deadline. Judging by the jubilation at that opening night soiree, they pulled off a heroic triumph against significant odds. Whether or not you’re a ballet afficionado,  Alice’s Adventures in Wonderland is one of those landmark theatrical events that should not be missed. 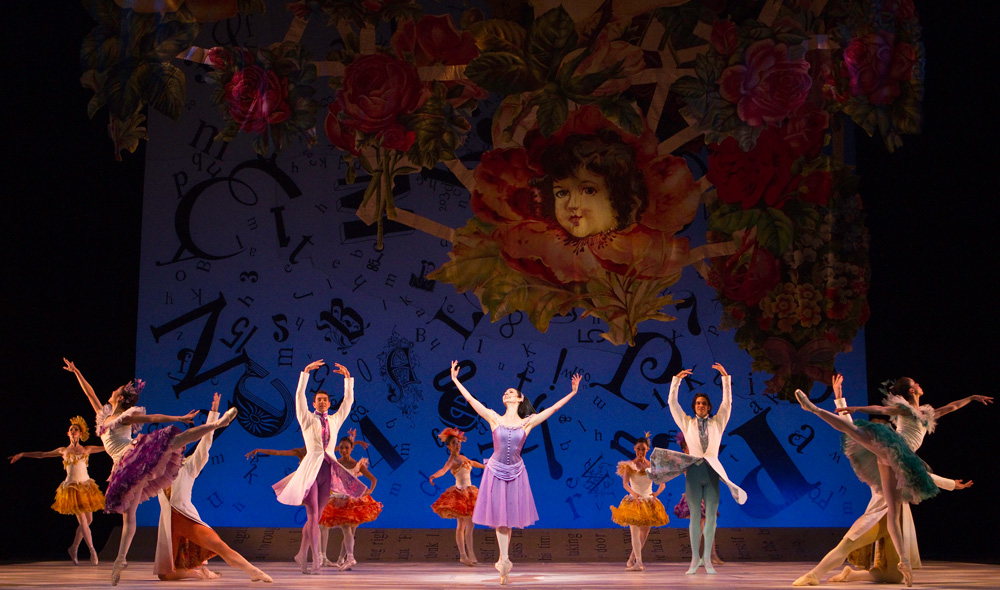