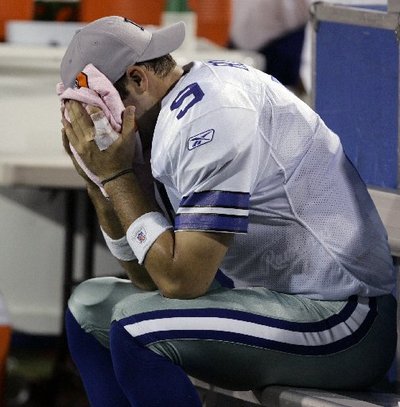 This photo of a dejected Tony Romo is from several months in the past and also three weeks into the future.

Scott Feschuk: Like Jerry Jones’ turkey neck, Scott Reid and I are inexplicably back – back for another season of prognostication-based futility, Six Million Dollar Man references and fat-lineman jokes. There are so many questions as the new season begins: Who will make the playoffs? How will the Buffalo Bills miss the playoffs? And will any U.S. corporation have the audacity to film a football-themed TV commercial that does not feature somewhere between one and three Mannings?

This is a great game to start with because the 2012 season is shaping up to be one of the most entertainingly disastrous ever for the Dallas Cowboys. The hints are everywhere: their marquee receiver is basically under house arrest, Tony Romo is already saying that the pressure of expectations isn’t getting to him (this is what he says when the pressure of expectations is getting to him) and Jerry Jones spent the off season doing things like this:

I’m calling it: this is the year when Jones finally crosses over from Charmingly Unstable Megalomaniacal Billionaire to Just Plain Crazy Guy. I see him showing up on the Cowboys’ sideline late in games as per usual – but this time in a long fur coat and holding a monkey or a hooker. This season the NFL is selling access to the high-level all-22 film that coaches use to break down other teams – but what I want is a non-stop, round-the-clock, owners-film feed of Jerry Jones discussing potential roster moves with his pencil sharpener. Pick: Giants.

Scott Reid: There are three great reasons to watch the NFL regular season opener tonight. First, we’ll find out if the Giants’ remarkable post-season run can be sustained into a new year. Second, Rob Ryan gets a chance to unveil a vastly upgraded secondary that could be a real difference-maker for the Cowboys. And third, I will be refereeing the game.  (Incidentally, if the first penalty announced over the loudspeaker sounds a little like Cher’s Gypsies Tramps and Thieves well…you’re welcome, America). One of the things I love about this time of year is the way Cowboys fans convince themselves that Tony Romo has matured during the off-season. Which is true only if your measuring stick is Prince Harry. My gut: The Giants will take a small step back this year with more limited offensive tools and a villainously hard schedule. Frankly, their fortunes hinge on whether Michael Vick can avoid being injured down in Philly (survey says: MEDIC!!). As for the Cowboys – I wouldn’t advise Jason Garrett to buy any green bananas. Don’t think he’s going to be around after he leads his team to another no-show in the playoffs. The two keys to this contest that I’ll actually be watching for? First, will the Giants be able to pound the ball without Brandon Jacobs? And second, how much longer will Jason Pierre-Paul’s arms have grown over the summer (hint: think Man-Bat).

The rest of our Week 1 picks – and our patented Can’t Miss (Until It Does) Super Bowl Selection – will be available on Friday.