Reid: This promises to be the Frazier-Ali of post-season matchups. Saturday’s game marks the third meeting of the year between the Steelers and Ravens with each team notching one bone-splitting win apiece. These two are about as friendly as Donald Trump and Rosie O’Donnell (obviously, Rosie is Pittsburgh – she and Ben have surprising elusiveness for their size. Also, they both dig lesbians). 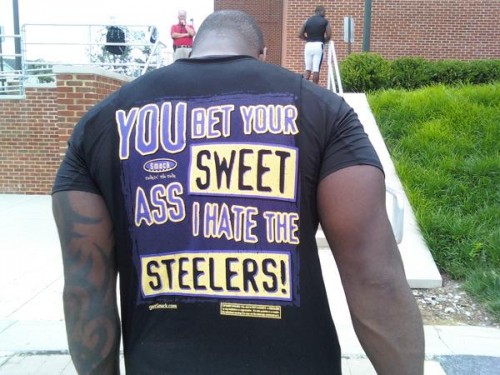 Personally, I would be shocked if someone isn’t hit so hard his skin falls off during this game. Again, it would be best if this were to happen to Roethlisberger. Then we’d see if he’s as ugly on the inside as he is on the out. I know I suckered a lot of you last weekend with my funny joke about Kansas City winning. I can’t believe how many of you fell for that – only a total jumbodork would bet on Matt Cassel to do anything other than stand still and stain his pants. No joking around this week though: Pittsburgh will win the battle of who is most unable to make first downs, score points and keep their skill players breathing without the help of intubation. Pick: Baltimore.

Feschuk: You’re crazy. Pittsburgh has a better defence, a better quarterback and the only big-time superstar receiver in this game (Mike “Not that Mike Wallace” Wallace). Not to mention the fact the Steelers have a decided advantage with the intangibles, such as special teams and Troy Polamalu’s Head & Shoulders commercials being slightly less annoying than Ray Lewis’s Old Spice ads, which try too hard and make me feel sorry for him. Everyone on sports radio says this game is going to be close in the fourth quarter and ultimately decided by a field goal. This pretty much guarantees it’s going to be a blowout by the fourth quarter and decided by 24 points. That’s just science. Pick: Pittsburgh.

Reid: It’s a miracle that Green Bay is getting points in this game. I know Matt Ryan has only lost once at home. And I know he throws a long ball so pretty they officially call it the Robert Pattinson.

But the Packers – whose bandwagon I hopped on early, then jumped off and am now scrambling back aboard – looked very good last week. Just like Cher, their running game is back and better than ever. At the end of the day, Green Bay’s crushing defence and balanced offence will be too much for Atlanta. Just like Pattinson’s bedroom eyes and pleated tummy will be too much for Kristen Stewart to keep happy. Pick: Green Bay.

Feschuk: I picked the Falcons to go to the Super Bowl, so logic would dictate that I’d choose them to win this game. But I’m tired of listening to logic. That dude’s a buzzkill – always telling me that my sedentary lifestyle will lead to further weight gain. Why can’t it instead lead to spiritual contentment and free ice cream?? Screw logic. Instead, I’m going to listen to something far more powerful and sensible – I’m going to listen to the desires of network television executives. This has been a dream season for big-time games and huge TV ratings. The networks are on a hot streak. And who do they want to see playing next week in the championship games? They want to see Pittsburgh v. New England. And they want to see the Bears host the Packers. This is what TV executives desire and this is what the football gods shall deliver unto them. It is foretold! Besides, there hasn’t been a team as boring as the Falcons since back when Matty Ice’s father, Vanilla, had a hit record. Pick: Green Bay.

Feschuk: Even though I’d wagered on the Saints last week, I admit to getting caught up in the improbable thrill of the Seattle upset. It was good TV. Pete Carroll was so giddy that he seemed perpetually on the verge of breaking into song: When you see a guy reach for stars in the skyyyyyyy/You can bet that he’s doing it for some dolls!! Carroll’s atta-boy bum-slapping hand must have been tender for days. And so many hugs! Seattle’s got to have set some sort of record for man-on-man embraces in a single day (although let’s hold off on awarding the title until John Travolta finally comes out of that sauna). Meanwhile, Matt Hasselbeck somehow managed to have a terrific day on the field while, judging from this photograph…

…simultaneously plotting Superman’s demise. And Marshawn Lynch turned in the most memorable power run since 2006, when Kirstie Alley spotted a stray M&M on the other side of the freeway. Can they do it again? I sure wouldn’t bet against them! In other news, I’m betting against them. In fact, I think they’re going to get murderized. One magical afternoon on home turf doesn’t prepare a mediocre team for the frozen tundra of Soldier Field and the challenge of facing Jay Cutler when he’s had an extra week to stay out late drinking. Pick: Chicago.

Reid: My second favourite pre-game comment of the week (for my super-wooper first favourite pre-game comment of the week just tinkle your toes down to the mention of Wes Welker below) came from Pete Carroll who, at any given moment, appears in danger of crossing the line from infectious enthusiasm to performing David Naughton’s “I’m a Pepper” song and dance routine (and we all know what didn’t happen to David Naughton’s career after that ditty erased the glow of An American Werewolf in London). In discussing special teams, Carroll said with a blast of bravura that his team will make a point of kicking to Devin Hester. He was swaggering around in that Tammy Wynette wig of his, talking tough about how his players are paid to tackle Hester and they don’t fear him. Let me give you a piece of free advice, Suzanne Somers: Fear him. When Hester fields kick offs and punts, he has super powers. That’s not an exaggerated way of saying he’s very good. I mean that he literally has super powers. He can travel at super speed, read the minds of oncoming tacklers and, of course, he becomes invincible when he wears his Amulet of Awesome.

There’s no doubt that Chicago is the better team with the better players and the better everything all over. But the great imponderable of the game is which team Jay Cutler will decide to throw touchdowns to. I have little doubt Chicago will catch enough of them to win this matchup. But I’m not so confident that I’ll give up all those points. Pick: Seattle.

Feschuk: According to a tweet by Adam Schefter, Wes Welker – preparing to face noted fetishist Rex Ryan – made “11 foot/toe/step up references in his press conference” on Thursday. That’s how you talk smack creatively. And here’s how you do it the other way: Antonio Cromartie called Tom Brady an “asshole” this week. A couple other Jets also took verbal shots at the New England quarterback. And what did Tom Brady do to so anger these fine gentlemen? Did he resort to dirty play? Seduce their lady friends? Fail to share the secret of his baby-soft skin? Worse. Much, much worse. Apparently, after throwing one of his 47 touchdown passes the last time the Pats played the Jets, Brady had the unmitigated gall to actually point in the direction of the New York sideline.  HOW DARE HE?? How dare he sully the noble, cultivated pastime of football by with such a vile and– wait, what? That’s why they’re ticked off? They’re ticked off because he POINTED at them? I thought football players were tough and manly but apparently they can be emotionally overwhelmed by the mere sight of Peter Pointer. Waaaah! Make him stop Coach Wyan! He’s huwting our feewings! I guess the question now is: What will the monster Tom Brady do in the direction of the Jets this week? Wink? Bunnyhop? Or maybe that Leather Tuscadaro gesture where she slapped her thighs and then – boom – finger pistols! It’s all too horrible to even contemplate. In other news, to judge from many of his recent throws, Mark Sanchez is well-positioned to become the best quarterback in football in 2011 if the new collective bargaining agreement mandates that all receivers must be at least 12 feet tall. Pick: New England.

Reid: Among the 11 brilliant footsie references that spilled from Welker: “You definitely have to be on your toes,” “We’re going out there being good little foot soldiers,” “He’s got great feet,” and of course, “You can’t just stick your toe in the water.” In the long history of “let’s shove this game down the throat of that toe-sucking fat mouth bastard,” Welker’s performance may have set a new high mark. Plus, this is what his girlfriend looks like:

Then there’s Brady’s reaction. Which I love also (not love as in “I think he’s really cool” but rather “I’d like to have a locket of his hair – and maybe also his baby” kind of love). He’s so cool he pisses icecubes. Cromartie calls him an asshole? Brady just smiles and praises Cromartie. Until Sunday. Ooooooh, Sunday! On Sunday, he’s going to go up and down Cromartie like Sir Edmund Hillary. He’s going to clean him out faster than Stacy and Clinton empty a closet full of pleated pants.* Truth is, the Jets D cannot keep pace with Brady. Don’t be surprised if they score 45 points or more again. Ryan has set himself for a royal ass-pounding. A de-feet of epic proportions.  Pick: New England.

* Feschuk’s note: I didn’t get this joke either. Having investigated, I now believe it is a reference to some sort of wardrobe makeover show. I am so, so sorry – for you having to read that, and for what Scott Reid has become.