And more adventures in tailgating 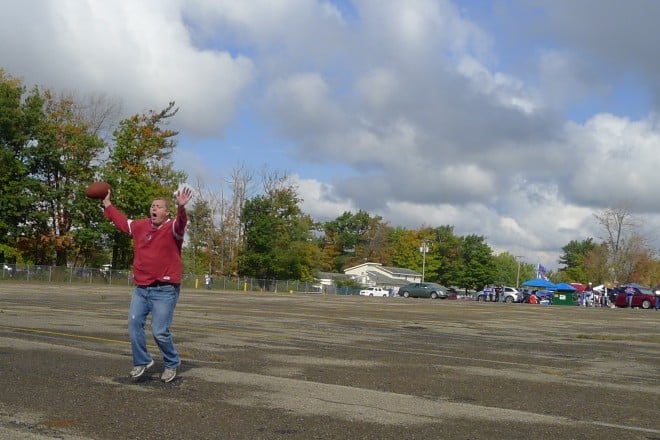 Reid: When people say to me “the Arizona Cardinals are undefeated,” I shake my head. Then I get pissed off and think why are these cactus-humping Cards fans even talking to me in the first place? Then I run after them and scream loudly into their faces, “You’re fat!” Then WKBT-TV anchor Jennifer Livingston goes on camera…

… and lectures me for four minutes about what a shitheel I am and how my rage-fuelled intolerance is hurting my children – and everyone else’s children for that matter. Then the whole world applauds her and hates me. Then I take a good long look in the mirror at myself. Then I realize that my anger is really coming from inside, stemming from the deep disappointment I feel about my own life and my failure to achieve all that I had once planned. Then I don’t bother to get dressed because…well, what’s the goddamned point? Then I remember I’ve got a bottle of Makers Mark downstairs. Then I realize it’s only 7:30 a.m. Then I realize I don’t care. Then it’s Wednesday. Then it’s 2017. Then I don’t heed my doctor’s warnings. Then I die at age 59 lonely,  broken, and smelling like an old car seat.  So…way to go Kevin Kolb. Hope your happy with your improbable comeback as a starter. Pick: St. Louis.

Buffalo (plus 9.5) at San Francisco

Reid: Not since 1950 has a team scored 45 second-half points, as the Pats did in Buffalo last weekend. And yet, it was the lesser of two miracles that occurred Sunday at Ralph Wilson Jr. Stadium. Even more amazing was the happy resurrection of Randy the Macho Man Savage, who returned to greet Scott Feschuk and my son Will – while confirming that there the afterlife makes no room for gym memberships. 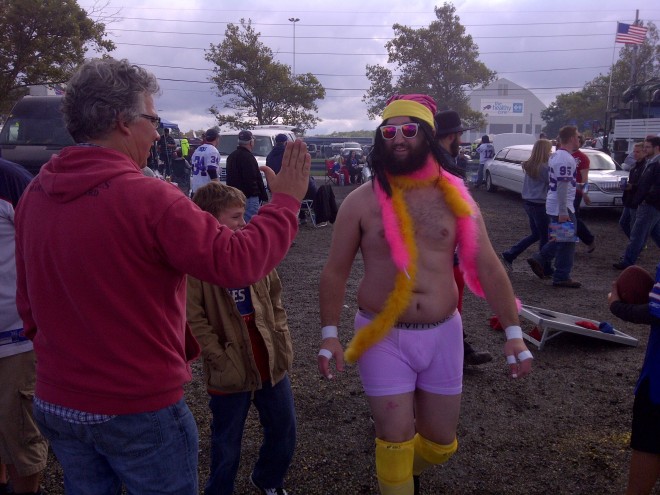 Shortly before the game began, I stood with three generations of Feschuk men – Bills fans all – and was told that the Buffalo defence was to be respected. This confirms that a) God is not a Bills fan b) God is not Ukrainian (like we needed more proof of that) but c) God does have a sinister sense of humour. The Niners, on the other hand, allowed exactly zero points in the second half of their matchup against the Jets. Which is equal to the number of points they allowed in the first half. Which means that in the collision of Feschuk/Reid favourite teams, I win. Yay, me. Pick: S.F.

Feschuk: That was a statement game for the Bills last week against the Pats. Unfortunately the statement they made was, “We are terrible.” In the second half of the game, Buffalo’s defence played about as hard as these guys.

But the real competition last Sunday was in the parking lot outside Ralph Wilson Stadium where Scott Reid and I played, and repeatedly lost at, beer pong (FYI, that’s not me in the photo below. That’s my friend Dori. I’m more effeminate.) Then we let our kids play beer pong – because dammit I wanted to be worse at something than I was at beer pong, so I chose parenting. Our kids lost at beer pong, too. 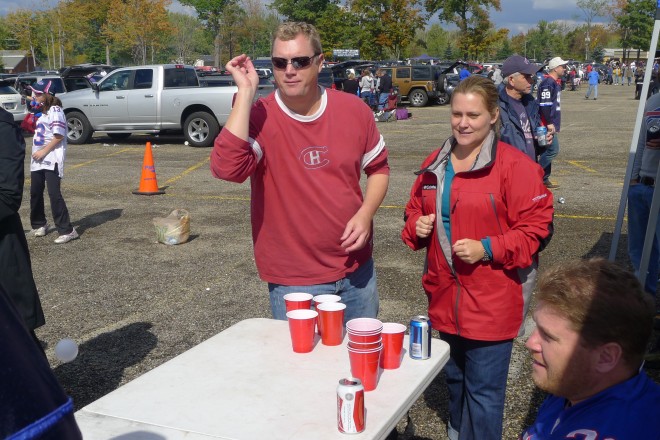 Look at that form, ladies and gentleman. That look of concentration! That effete wrist action! That Montreal Canadiens shirt he’s wearing to an American football game for some reason! I have seen the future of beer pong and it’s Scott Reid falling down drunk from all the beer he had to drink during beer pong. (Actually, that’s not the future. That’s the recent past.) Pick: Buffalo.

Chicago (minus 5.5) at Jacksonville

Feschuk: The way he publicly showed up his offensive coordinator on Monday night seals it: Jay Cutler is my new favourite Gossip Girl character. He’s suuuuuch a bitch. He’s also a curious anomaly. No doubt over the years there have been many quarterbacks who are total asshats – but few if any have been so open about revealing their true selves. Be honest: if you’re watching football this weekend, and they cut away to a highlight from another game, and the highlight is of Jay Cutler being beaten to a pulp on the field by his entire offensive line – I mean, really beaten, with kicks and stomps and just a tremendous stream of profanity and perspiration – would you be even the least bit surprised? No, you wouldn’t. Most of the ensuing headlines would contain the phrase “had it coming.” Pick: Chicago.

Reid: If I was Mike Tice and I weighed 285 lbs and had hands the size of Manitoba, Jay Cutler would listen to my opinions on whatever the honky-ity hell I felt like having opinions about. How to get rid of the ball quicker? Listening. How to spot that open receiver? Still listening. How Taurus men manage to give twice the love they take? Listening and nodding. I think Tice’s mistake is trying to ‘handle’ the situation. There should be no handling. No using of complex coaching strategies to motivate. Down with handling, up with making.  Making him listen. Making him fall. Making him cry tears and spurt, ‘I’m a sorry little puke. Please, no more.” Pick: Chicago.

Atlanta (minus 3) at Washington

Reid: Wasting RGIII on Daniel Snyder is like wasting a really expensive wet suit on Val ‘From Iceman to Ice Cream Man’ Kilmer. It’s just a crime against quality. 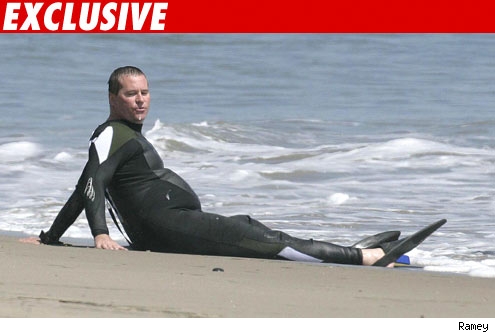 "If that speck of black moves, I'm eating it."

Obviously, this kid is the whole freaking show. Last week’s come from behind win was a thing to behold. He led his team down the field with authority and poise. And he always looks SOOOOO goddamned cool! Will Smith doesn’t look that cool. Jesus, Willow Smith doesn’t look that cool. But if the Snyder era has taught us anything it is to expect the worst – and then times it by two. I don’t know how. I don’t know when. I can’t predict the precise form in which it will manifest. But eventually Snyder will f**k it all up. Trap game for Atlanta that I expect Atlanta to leave unsprung. Pick: Atlanta.

Feschuk: I have no idea what’s going to happen in this game so instead here’s some practical advice for the dedicated football fan: What do you do if you show up for a morning of NFL tailgating only to discover that your barbecue is not working?

1. Gather a large group of men to look at the barbecue. 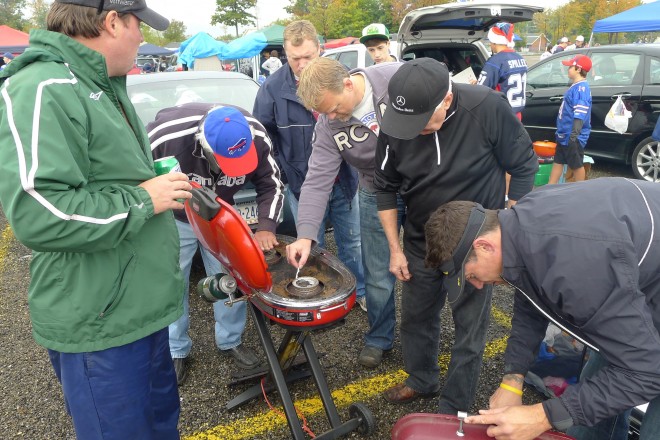 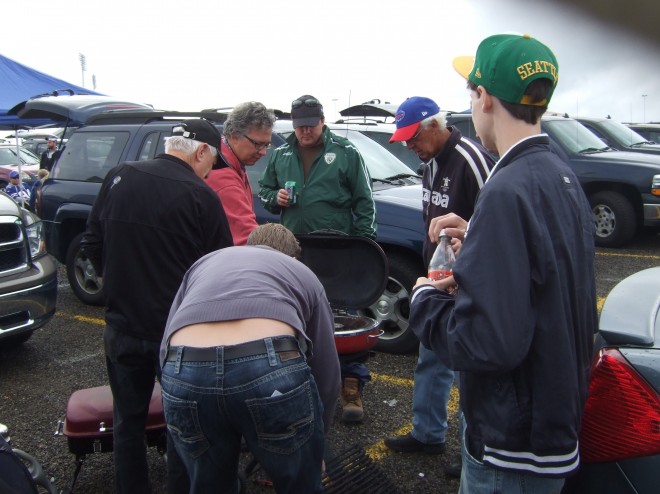 3. Put your face really, really close to where the propane stuff comes out. 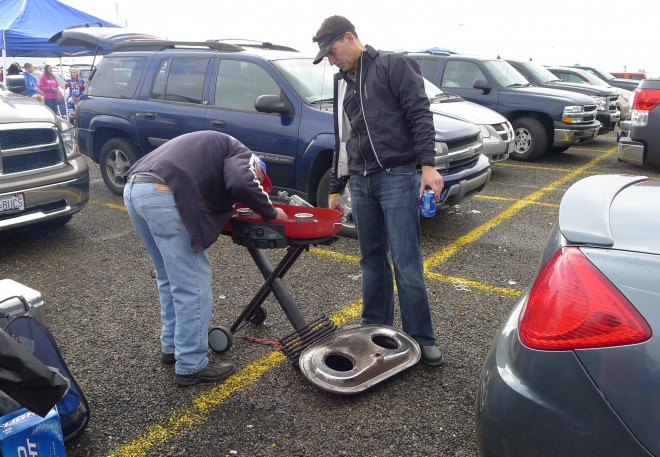 4. Whack the delicate device repeatedly with a brush. 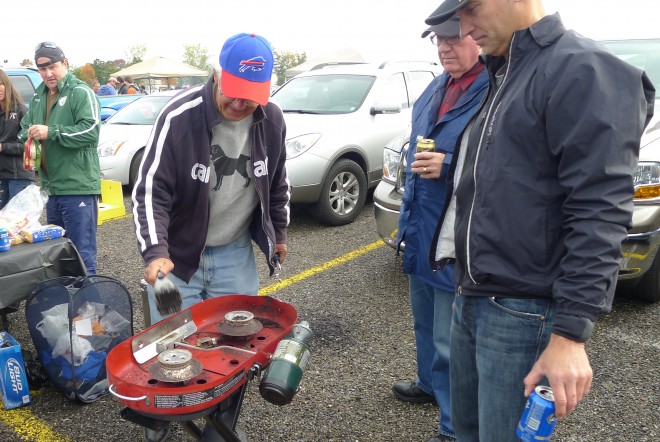 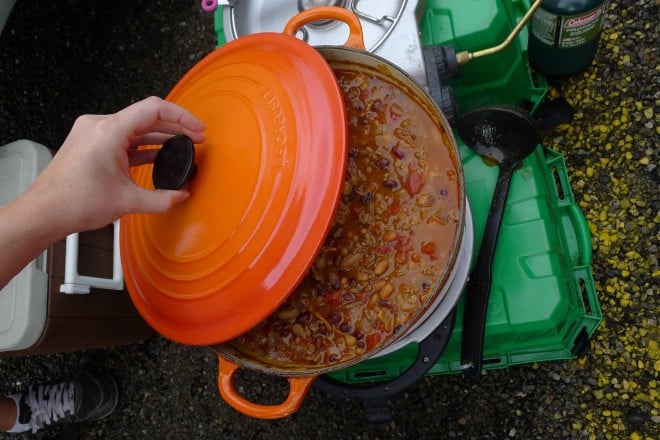 Cleveland (plus 9.5) at New York Giants

Feschuk: Dear Cleveland Browns – it gives me such pleasure to inform you that after reviewing your four very impressive audition tapes, we are thrilled to invite you to join us on Fox TV as contestants on the can’t-miss new reality series, So You Think You’re The Worst Group of Untalented Losers Ever! (Your dressing room is just down the hall from the ’62 Mets, the ’75 Capitals and Maroon 5). Pick: New York Giants.

Reid: God must truly hate Brandon Weeden. Cleveland is to quarterbacks what Arnold Schwarzenegger’s book tour is to keeping some shit to yourself. Tim Couch, Kelly Holcomb, Brady Quinn, Kenny Anderson, Seneca Wallace. It’s not a city, it’s a Saw film. On the other side of the ball is a Giants team that has been inconsistent on defense and weighed down with injuries. And sure, those are definite challenges that need to be worked out. But they’ve got Manning The Younger and he’s quietly on his way to becoming Manning The Better. Pick: New York Giants.

Denver (plus 7) at New England

Reid: Let’s do some hard-nosed handicapping – because statistical analysis is what you expect from a guy who thinks Baltimore is undefeated. So far this year Tom Brady has thrown for seven touchdowns with one pick and a 102.4 rating. His on-field rival Peyton Manning has eight TDs, three INTs and boasts a 96.9 QB rating. Brady therefore enjoys a slight advantage in a head-to-head comparison – until you remember that Manning has no right arm. Next, let’s look at the team records. Denver has been beaten by Houston and Atlanta – the two class acts of the AFC so far this season. The Pats have been defeated by Arizona and Baltimore – also both pretty damn good < Cardinals SUCK!!> NE will be at home. But Denver has the better defense. So what’s the funny quip I’m building to? I’m taking the Broncos. Pick: Broncos.

Feschuk: You’re never more hilarious than when you’re trying to forecast the outcome of a football game using real facts and your actual brain. Stick to reading tarot cards, flipping quarters and sacrificing virgins. That Rob Gronkowski kid is going to eat the Broncos’ D alive – and you know what that means: it means I’m over 40 years old and therefore officially entitled to refer to anyone younger than me as “kid,” just like all the sportscasters do, even when the “kid” they’re describing is, like, 26 and the father of five. Pick: New England.

Feschuk: There’s nothing in the Bible about God having a sister – but God must have a sister and Drew Brees must have totally jerked her around, because God is some kind of pissed at the New Orleans Saints. First, the team gets singled out and sanctioned for player bounties – a common practice on many teams. The coach gets suspended for a year and replaced with a FedEx guy who just happened to walk in the door at the right time. And now the Saints are 0-4 despite playing pretty well at times. Pick up the phone, Drew. Call God’s sister and work it out! Pick: San Diego.

Reid: I bet if God had a sister, she’d look like this. 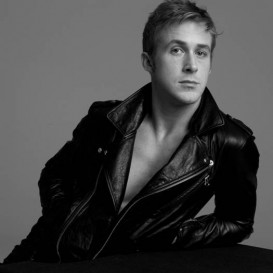 Reid: After being blanked by the 49ers, Jets coach Rex Ryan gave his team two days off and a ‘go home and search your souls’ lecture. His reasoning was shrewd. He knows his players will spend that time off watching tape, grinding their teeth and looking in the mirror for answers. Either that or playing Madden and drinking Prosecco. Of all the screwed up teams in the NFL, I’m pleased to report that the Jets are the most screwed up. Next stop: Bruce Jenner marries your mom. The line on this game is big. It oughta be. Pick: Houston.

Feschuk: People sometimes poke fun at Rex Ryan but here’s the truth: most of us bought into his bluster. Not the bluster about his team winning the Super Bowl – God, no one thought that would happen. I mean all his chatter about what a great leader he is and what a great coach he is and how he could wrestle a bear while simultaneously eating another different bear. But judging from the way his team quit on him last week, Rex Ryan is no longer cock of the walk. As Monty Burns would put it, Rex Ryan is cock of nothing. Pick: Houston.