Our Mid-Mid-Season look at who's terrible and who's worse

Resuming a hallowed and time-honoured tradition that dates back all the way to the beginning of this sentence, we take a break from sucking at football picks to present our Mid-Mid-Season Lack of Power Rankings. Teams are rated from worst to first. 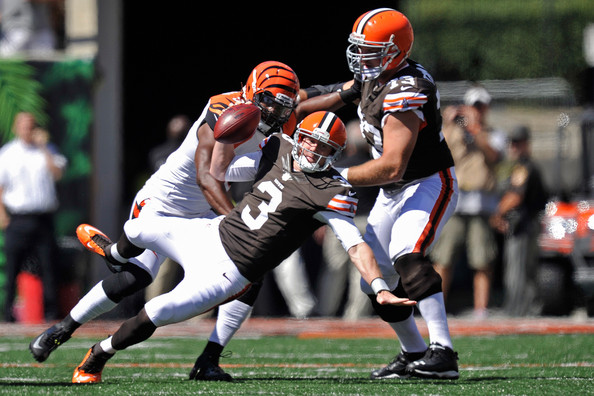 1. Cleveland (0-5) You know who’s having a terrible season so far? God. Defend Him all you like: the Guy is just going through the motions. Come on, God: we’ve seen you torment the Browns for the last eon. TRY SOMETHING NEW.

2. Buffalo (2-3) The Bills are giving up so much yardage so quickly that they’re on pace to break the all-time record set by France in 1940.

3. Jacksonville (1-4) So the NFL has announced that in 2013 it will again be sending Jacksonville over to play a football game in London. Twice more and we’ll be even for them sending us Coldplay.

4. Tennessee (2-4) Despite its win over Pittsburgh, this team is a bigger train wreck than Barack Obama’s debate performance wrapped in NBC’s fall comedies and driven into a tree by Lindsay Lohan.

5. K.C. (1-4) Ladies and gentlemen, the Brady Quinn era is upon us. Lock up your daughters! (Otherwise, they may steal Brady’s job.) On the upside, a few drives should be enough to earn Quinn an ESPY nomination in the category of Best Ryan Leaf Homage.

6. Carolina (1-4) I’m not saying Cam Newton is in a sophomore slump but if he tried to pass wind right now, it would come out of an ear hole.

7. Oakland (1-3) Eyes are going to be glued to every Raiders game from here on in – and I mean that literally because there’s no other way anyone would watch one.

8. Tampa Bay (1-3) Josh “Overthrow” Freeman would be one of the best quarterbacks in football today if only the new collective bargaining agreement had mandated that all receivers be at least 12-feet tall.

9. New York Jets (2-3) Maybe the solution is to take Mark Sanchez and Tim Tebow and graft them together to create the world’s first four-armed, two-headed 440-pound QB (not counting JaMarcus Russell).

10. Indianapolis (2-2) The Colts’ inspired performance against Green Bay last week – in honour of their head coach, who is being treated for leukemia – was so inspiring that Rex Ryan spent the week confessing to his players that he’s lactose intolerant.

11. New Orleans (1-4) Here’s a true story: to motivate his team before pivotal games, former Ravens coach Brian Billick used to play a brutally violent scene from the mob film Goodfellas. Not sure why Drew Brees keeps renting The Notebook.

12. Detroit (1-3) I’m not saying the Lions don’t look like a playoff team, but right now their inspirational bulletin-board material consists of travel brochures for January cruises.

13. Washington (2-3) Did you see that hit on Robert Griffin III last Sunday? He was almost separated into more pieces than Voldemort’s soul.

15. Pittsburgh (2-3) We were going to throw a kind word or two the Steelers’ way but let’s be honest: their receivers would just drop them.

16. St. Louis (3-2) There’s no easy way to write about things that are neither very good nor very bad. This is why you see so few tweets about the Rams, cantaloupe or Matthew Fox.

18. Cincinnati (3-2) The Bengals have actually looked pretty good so far. Andy Dalton! BenJarvus Green-Ellis! The 45 guys not even Marvin Lewis can name!

19. Seattle (3-2) It’s fun to watch Pete Carroll. Whenever his team does anything positive, he seems on the verge of breaking into song: When you see a guy reach for stars in the skyyyyyyy/You can bet that he’s doing it for some dolls!! After last week’s win over the Panthers, Carroll’s atta-boy bum-slapping hand was tender for days.

20. Green Bay (2-3) I’m not saying the Packers’ offensive line is terrible, but it’s been five days since the last game and Aaron Rodgers’ eyeballs are still spinning around like Cookie Monster’s.

21. San Diego (3-2) Things have really started to come together for Norv Turner. He’s finally figured out how to get XM’s 1950s channel on his headset.

22. Dallas (2-2) I’m sending my kids out for Halloween as the Cowboys’ offence. They don’t even have to wear a costume or anything – everyone will know who they are when they take three and a half hours to get down the driveway.

23. Arizona (4-1) Listen, the Cardinals have started great and everything, but their running game looks non-existent, their offensive line looks shaky and Larry Fitzgerald looks at the photos Scott Reid keeps sending him and thinks to himself: “Now there’s a guy who just doesn’t have the body for fishnet stockings.”

24. Philadelphia (3-2) The NFL has grown protective over the years: No hitting the head, fellas. No touching the quarterback without his written permission. And y’all come inside now and hide under the bed – it looks like rain. But somehow, week after week, Michael Vick still finds a way to get absolutely pummeled. The football gods clearly view Mike Vick in the same way that the handsome gods view Scott Reid.

25. Minnesota (4-1) The Vikings are so surprisingly respectable that coach Leslie Frazier has been able to lend his repertoire of pained grimaces to someone who needs them more – such as anyone who took Chris Johnson in fantasy football or Kim Kardashian in wedlock.

26. Chicago (4-1) In their past three games, the Bears’ defence has scored five touchdowns. This made Jay Cutler write in his Hello Kitty diary about how much he HATES THEM.

28. Atlanta (5-0) Have you looked at who the Falcons have beaten? Mitt Romney faced stiffer competition in the Republican primaries.

29. New England (3-2) There’s no denying that New England looks good. And there’s no denying – based on my viewing of eleventy squillion TV commercials during the football season – that Cialis treats erectile dysfunction by bombarding the penis with sly winks, manly imagery and vague euphemisms for “finally gettin’ some.”

30. Baltimore (4-1) Ray Rice has been ripping off some of the fiercest, hardest runs we’ve seen since 2006, when Kirstie Alley spotted an M&M on the floor on the other side of the Wal-Mart.

31. Houston (5-0) The Texans have looked impressive but the teams they’ve played are a combined 8-17. That said, Matt Shaub is superhuman, otherworldly and kind of turning us on even though we’re way straight.

32. San Francisco (4-1) Jim Harbaugh has the Niners so stoked and so confident that for the rest of the season they’re going to take it 1.5 games at a time.