Two Scotts with football predictions, and some Seattle cheerleaders

Scott Reid: It’s fashionable these days to be a Texans skeptic. And, as Feschuk knows well, I’m nothing if not fashionable. 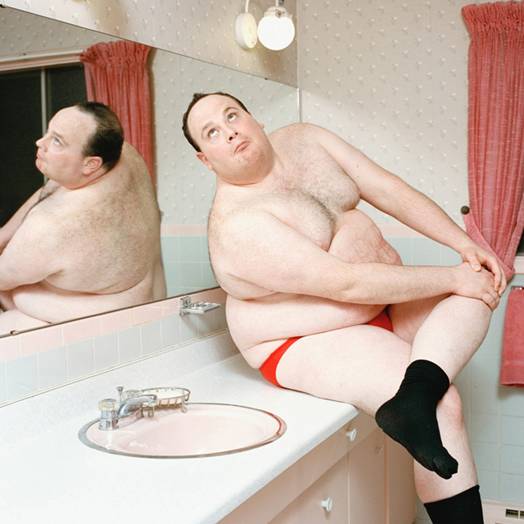 Look, I got socks for Christmas!

Sure, Houston has won 12 times but who have they really topped? Take away early-season victories against Denver and Baltimore and their record relies on beating up on the likes of Jacksonville (twice), Miami, the Jets, Angela Lansbury, the 1962 New York Mets and Willow Smith (although she took them to overtime). By contrast, their losses were all to playoff teams: Green Bay, New England, Minnesota and Indy. Making matters worse, Houston is skidding badly into the playoffs. Since getting squared by Ndamukong Suh on Thanksgiving Day, Schaub has thrown as many interceptions as touchdowns, led the team to three losses in five games and only pees while seated (fun fact: JJ Watt is also a squatter). Handicappers everywhere are consequently predicting a swift exit from the playoffs. But in my red-thonged opinion, the boys in Vegas are a week too early. Houston is no powerhouse but, at home, they’ll easily dispatch the Bengals. But in the next round? They’re going to get Willow’d. Pick: Houston.

Scott Feschuk: It’s true: everyone is picking a Bengals upset. It’s as though we’ve all forgotten that in the most pivotal of football moments, Cincinnati coach Marv Lewis is best known for staring ahead with an expression on his face that says, “Hmm, where did I leave my car keys? Also, what are car keys? And hey, who’s this voice in my head wondering about car keys?? OUT WITH YOU, SATAN! [Punches self in brain.]” 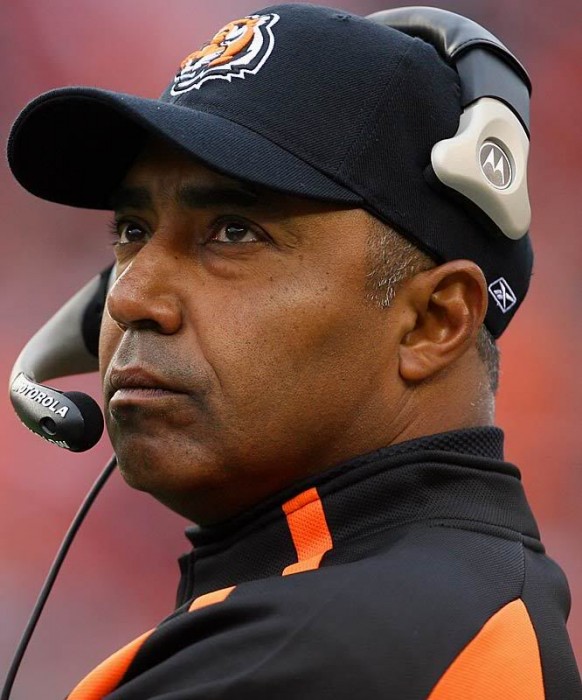 "Hey, who just punched myself in the brain?"

What I’m saying is that with Norv Turner and Andy Reid having been fired, Marv Lewis is the NFL’s longest-tenured and most-distinguished Terrible Coach in Crucial Games. And that’s good news for football fans. Every big drama needs some comedy relief – and Marv will be here on Saturday to burn three timeouts before the eight-minute mark of the first quarter, or let time expire in the first half while mulling over a field-goal attempt, or throw his red flag to challenge whether Joanie ever truly loved Chachi. Pick: Houston.

Reid: Looks like the Vikes’ huge win last week did little to sway the odds makers. If this line were any bigger, Adrian Peterson could run through it (see how much better the jokes are going to be in 2013). But it’s for a good reason: Green Bay will win this game just as surely as the next Nora Ephron picture will include a gay best friend and something soulful from Snow Patrol. (Note from Feschuk: Reid is either unaware that Ephron is dead or is convinced that this small hurdle will not diminish her output of cinematic treacle.) The real thing we’ve got to sort out is why Kathy Griffin thinks it makes sense or any kind of decency to go down on a gay dude with a national audience watching – including two of my sons who now think the funniest word in the English language is ‘pricknic’ (they’re probably right). 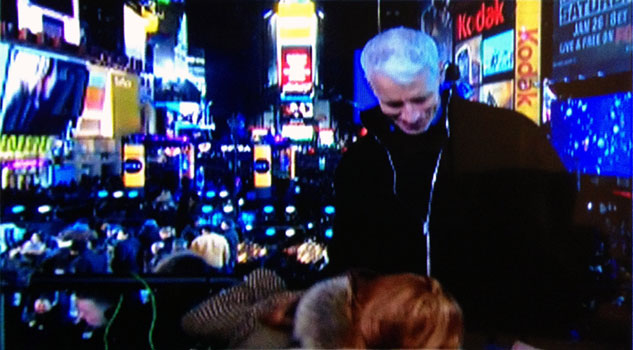 “If you see Travolta down there, could you send him up for an interview?”

Feschuk: According to league sources, Vikings QB Christian Ponder has been “very limited” in practice this week, and also in every game in his NFL career. 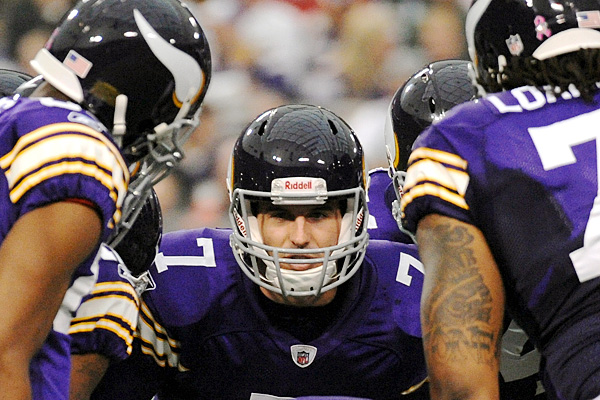 "Thirty Left Jet Anything But a Pass Attempt."

This guy gets the Trent Dilfer Memorial Award for Playoff Team That is Unaware It Even Has a Starting Quarterback. Can’t they just jerry-rig a pitching machine or a Lego robot to repeatedly hand the ball to Adrian Peterson? Or how about a series of stunt-casted guest stars to boost ratings?

Ponder: My elbow still hurts from when it hit a helmet last week, coach.

The key to this game will be the Packers learning from last week and this time around stacking the box with 11 players and a hastily dug moat. Pick: Green Bay.

Indianapolis (plus 6) at Baltimore, Sunday, 1 p.m.

Feschuk: What a Sunday of football – unless you’re Joe Flacco. To put it in the parlance of Sesame Street: Joe Flacco is the one of these things that’s not like the other. All week long the hype has been about the three amazing rookie quarterbacks (Andrew Luck, RG III and Russell Wilson) who took their teams to unexpected heights during the 2012 season and will be taking the field on Wild Card Sunday. And then there’s Joe, who’s so average at his job that young, doe-eyed children come up to him and lament, “Say it ain’t so-so, Joe.” I’m not saying the guy doesn’t engender much confidence but right now John Harbaugh’s game plan calls for Ray Rice to carry the ball 3,400 times. The Ravens have a reputation for being defensively stout, but in fact their D ranks in the bottom half of the league this year. And the team lost four of its last five games. They’re ripe for the picking! To again put it in the parlance of Sesame Street, “Six! Six beautiful points against the spread! AH! AH! AH!” Or as Mr. Hooper used to say to Big Bird, “Get out of my store, you filthy animal.” That quote doesn’t have any practical application in terms of this game but it’s always worthwhile to remember that Mr. Hooper was a horrible, hate-filled man. Pick: Indianapolis.

Reid: There are two kinds of people on this Earth: Those who retire gracefully from life as a professional athlete. And those who decay into a spiral of despondency, drugs and murder. (The second kind are also known as Nickleback fans). To help Ray Lewis determine which of these two categories into which he might fall, we have prepared this helpful three question personality test.

1.  Does watching Super Bowl XXIV make you want to:

a) Cheer for the Cinderella season-ending win by Kurt Warner and the Rams?

2. When gazing at the following image, do you see a pretty bunch of flowers or somebody who had it coming? 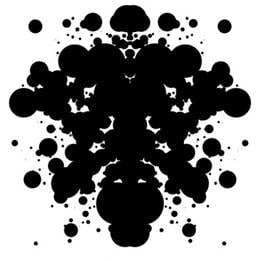 3. Do you believe Chavril is a real romance? (Answer: Who gives a shit, just burn the white suit). Pick: Baltimore.

Feschuk: Maybe I’ve been listening to too much sports radio but based on what I’ve heard this week it is my understanding that Robert Griffin III is an amazing quarterback, a peerless athlete, a terrific teammate, a great humanitarian, a super genius, a hilarious prankster, a compelling singer-songwriter, a founding member of the Dogme 95 film movement, a good source of 11 essential vitamins and nutrients and a Rockette. He makes the Most Interesting Man in the World look mildly intriguing at best. But let’s face it: it’s hard to predict what’s going to happen in this game. The Redskins came off of their bye week and won their last seven games in a row. Meanwhile, Seattle has won five straight and seven of eight. As an added bonus, Pete Carroll is planning to coach despite the fact it conflicts with his rehearsal schedule as a backup singer in the coming sensation, Manilow on Broadway! 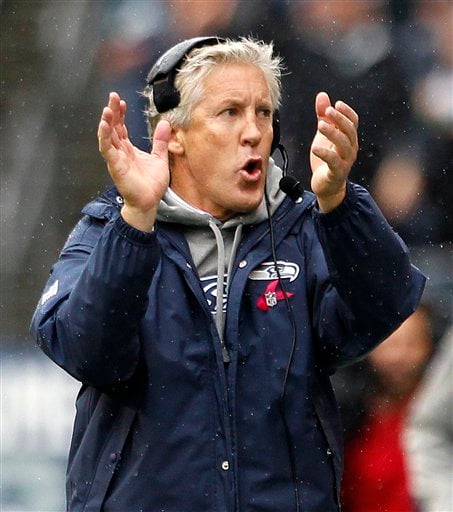 "Everybody sing! Her name was Lola..."

But enough stalling – tough games like this are why you turn to our NFL Picks, right? You come here for the astute analysis of gridiron trends and also the gratuitous photographs of Mrs. Tannehill in limited amounts of clothing. 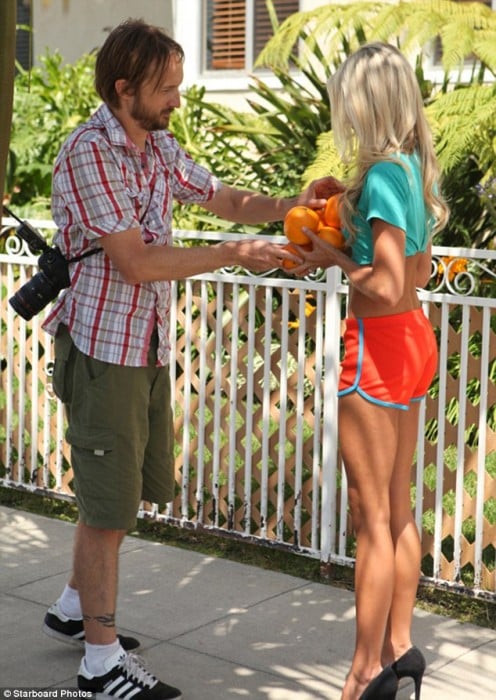 "Annie Leibovitz used up all the good portrait ideas so here, maybe hold these oranges?"

So here it is: I’m going with Seattle because based on extensive research, they are the only NFL franchise that tells its fans how they can “get the look” of the team’s cheerleaders. 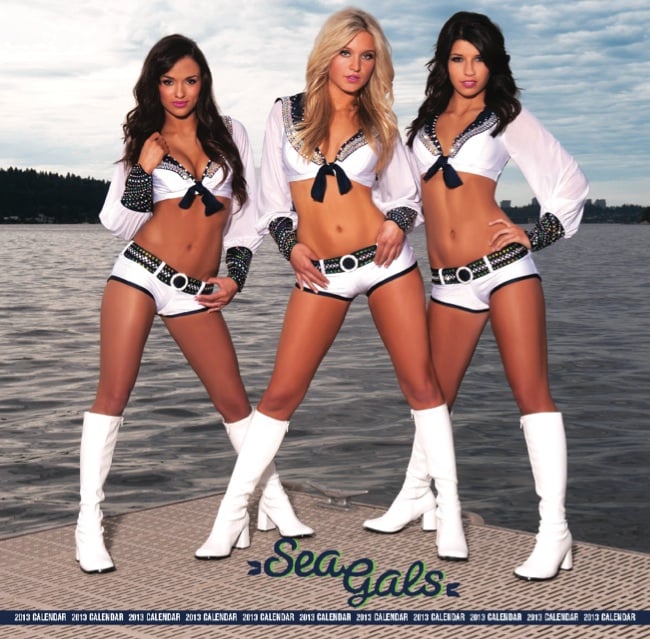 Step one: Carry 500 million watts of flattering lights with you at all times.

You may not think this is an important strategic edge, but you’re not the one who has to pick up the phone on Sundays and hear Scott Reid lament, “Why won’t those cheerleaders share the secrets of their fitness and beauty regimens?” I think back on how many accidents with a curling iron and home waxing kit could have been avoided in the Reid household! But those thigh burns are in the past, buddy. Want hair like a Seahawks cheerleader? Just make an appointment at the Gene Juarez Advanced Training Salon. Want to look slightly too orange? Seattle Sun Tan. It’s all there at your disposal, Scott Reid. YOU SHALL BE RADIANT. Pick: Seattle.

Reid: Yes, body wax can be dangerous. Remember that day you did my back? 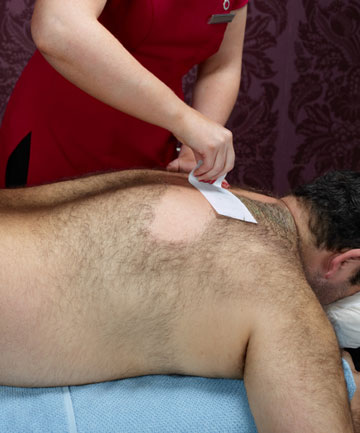 Because I am a Niners fan, I now fear the Seahawks the way dogs fear electric fences. For that reason alone, I must believe Washington will win at home against Seattle. But I’m also convinced that the Skins rushing game will wear down Pete Carroll’s defence – which doesn’t travel super well and is soft up-the-gut. Hands up if you also think that RGIII has had enough of this ‘Russell Wilson is the real rookie of the year’ talk. Wouldn’t it be awesome if, instead of a football game, Griffin and Wilson could just settle things with some kind of head-to-head competition of skill and strength. 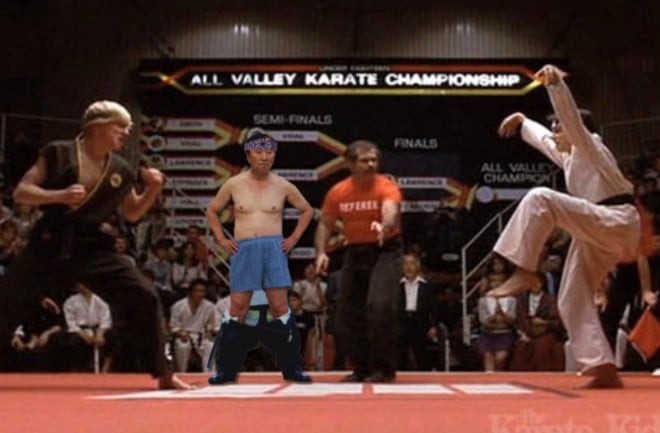