Nigel Wright should be driving a Porsche and other helpful facts

How much is $90,000? It’s the amount Nigel Wright gave to Mike Duffy. But how much is that really? If you’re like me, such large sums of money don’t come your way often — or ever (sad face) — so how do we non-senators wrap our heads around values to which we have no practical exposure?

Nigel Wright’s $90,000 “gift” to senator Mike Duffy could have bought him a Porsche 911. The $200,000 raised to purchase the (alleged) Rob Ford crack video is equivalent to the cost of raising a child to 17 (in a middle-income family). And the number of Albertans forced from their homes in last month’s flooding is equal to the population of Tonga.

These curious, and surprisingly handy, comparisons are all thanks to a Google Chrome extension called Dictionary of Numbers. Released a few months ago, the add-on aims to put numbers in “human terms.” When activated, Dictionary of Numbers creates annotations that provide context to the numbers encountered around the Internet. For example, on the front of the Globe and Mail‘s website we learn about the real value of Duffy’s $90,000:

For most people, conceptualizing large numbers can be a challenge. How do we understand quantities with which we have had little or no real-world experience? Just as we explain to a child that their fistful of change amounts to two Slurpees, or one comic book, it is easier to visualize numbers when placed in terms to which we can relate. Using the Dictionary of Numbers extension, the National Post‘s website becomes a page of digits put into perspective: 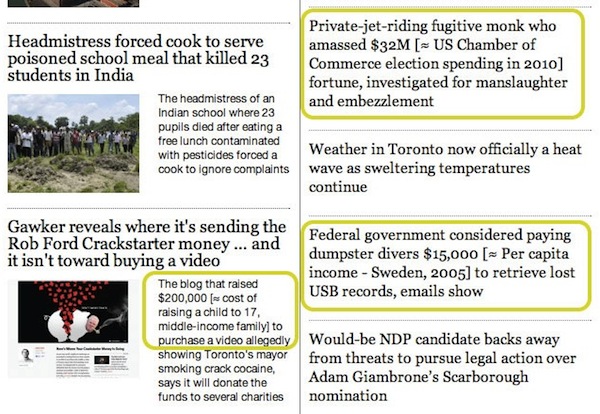 The comparative numbers don’t only aid in comprehension, they can add life and humour to dense reading, as happens with this pre-budget article from the Toronto Star.

The juxtaposition of the inline citations with original text can also provide fodder for some harsh value judgments. For example: 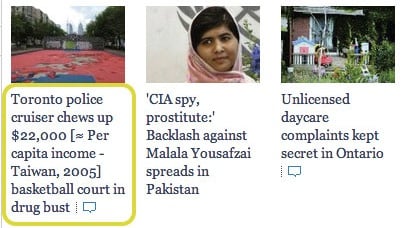 And as it happens, some things are just too epic to compare:

Dictionary of Numbers isn’t perfect. It doesn’t catch all numbers, its limited list of quantities provides for repetitive reading and it is America-centric. However, I think any tool that aims to help people better grasp the large, unwieldy numbers we encounter daily is great. Being able to understand and make rational judgments about significant amounts is a valuable skill, especially if it means a Porsche and not a resignation letter.