Opening Weekend: 'Observe and Report' ambushes us with cruel comedy, 'Hunger' hits us with real-life drama—either way it's no picnic 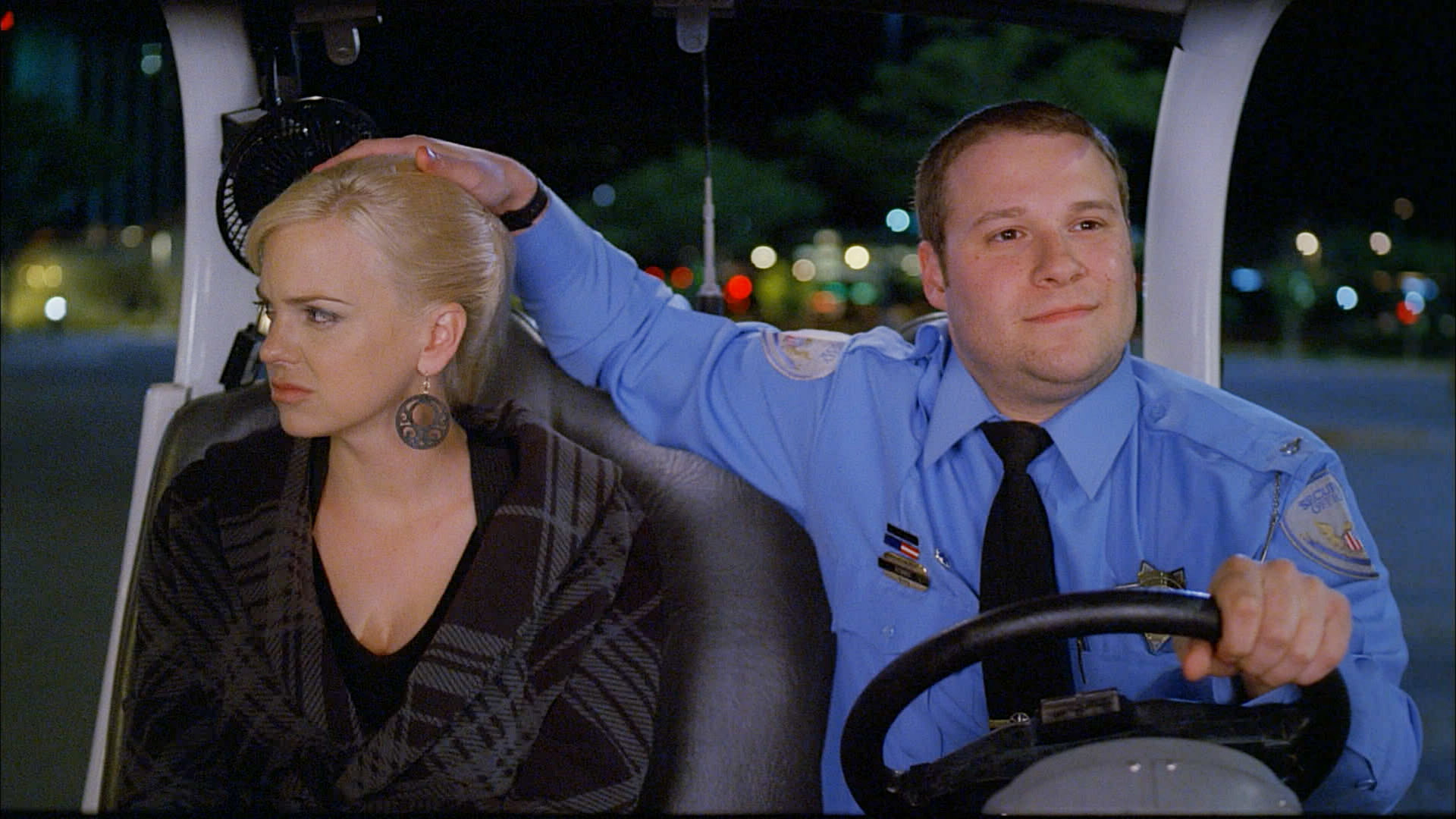 Anna Faris and Seth Rogen in 'Observe and Report'

This weekend, whether you’re up for comedy or drama, prepare to be shocked. The drama is Hunger, a visceral real-life story that follows the final six weeks in the life of Bobby Sands, who led the 1981 IRA hunger strike in Northern Ireland’s Maze Prison. It was written and directed by Steve McQueen—no relation to the late actor who rode the motorbike in The Great Escape, but the OBE and Turner Prize-winning British artist. There’s nothing escapist about Hunger, which has been stunning audiences and winning awards ever since its premiere last May in Cannes, where McQueen won the Camera d’Or for best feature directing debut. The other noteworthy, though less auspicious, opening this weekend is Observe and Report, which bears the ebulliant pedigree of Canadian actor Seth Rogen. It’s a dark comedy written directed by an American iconoclast named Jody Hill, his second feature after the martial arts comedy The Foot Fist Way.

Don’t let the jolly posters of Rogen and the harmless gags in the trailer fool you. Warner Bros. is doing it’s best to spin this as another boffo Seth Rogen comedy. But audiences who go expecting a night of light entertainment—or a sentimental farce reminiscent of Paul Blart: Mall Cop—are in for a rude shock. This is one of the most twisted movies released by a Hollywood studio in some time. The last one I can think of that’s went this far out of its way to be offensive is Very Bad Things. But it at least was consistently cynical and distasteful. What makes Observe and Report so disturbing is that it pays creepy lip service to rom-com convention and underdog heroism, then cracks open its booby-trapped narrative with the cold-blooded sentiment of a suicide bomber. I suppose you would call it a satire, but the target seems less important than the sheer relish of the assault. And the morality of it is so garbled, so punch-drunk, that you stagger out of it not quite sure if its one of the most subversive films you’ve ever seen, or one of the most retrograde.

Rogen plays Ronnie Barnhardt, the frustrated head of security at a shopping mall, who suffers from a bi-polar disorder and a rabid inferiority complex. Ronnie, who lives with his pathetic alcoholic mother, desperately wants to be a cop, a real cop. He is itching to bust heads and shoot guns. And he’s a racist, though a selective one. He seems to get along fine with the lisping Hispanic and the twin Asian twinkies on his staff, but he calls a brown-skinned man from the Middle East “Saddam” and assumes he’s a predator. All this is meant to be funny and cute, at least in the beginning—before the script blindsides us. When we’re not laughing at Ronnie, we’re supposed to be rooting for him, so we can be mortified to see what he’s capable of.

The plot revolves around Ronnie’s obsessive mission to apprehend a serial flasher who’s at large in the mall—the “pervert” as he calls him. When the police move in to investigate the case, Ronnie gets possessive about his turf, clashing with a sleazeball detective played by a typecast Ray Liotta. Ronnie tries to join the force, which only leads to more humiliation. And once Ronnie gets off his meds, look out.

Women fall into our hero’s scattershot line of fire. He’s drooling over a slutty dumb blond named Brandi who works at the cosmetics counter (Anna Faris), while a more virtuous, homely blond with a bum leg makes eyes at him while serving him free coffee at the doughnut counter. By now we’re used to Rogen ending up in the sack with women who would way out of his league, at least physically, in any normal world. After all, in his breakout movie, Knocked Up, seduced Katherine Heigl simply by getting drunk with her, becoming a literal poster boy for overweight bozos with delusions of romantic grandeur. In Observe and Report, he goes a step or two farther. Brandi gets so hammered on tequila shots, chased by a whack of his prescription downers, that while he is having sex with her, she’s only half conscious—her mouth open beside a trail of vomit on the pillow. When Ronnie stops thrusting, suddenly concerned that she might be comotose, or worse, Brandi jolts briefly back to life and tells him not to stop—a line of dialgoue that, aside from its dubious value as a gag, seems there to convince us that he’s not raping her outright.

This role has been hailed a bold career move for Rogen, who gets to prove that there’s some seriously nasty stuff lurking behind the good-natured stoner we’ve come to know and love. His performance, actually, is pretty damn good. Whether or not you’re getting tired of Seth Rogen Effect by now, and whether you’re appalled or delighted by this Jekyll-Hyde transformation, here he shows that can definitely act, and that he’s capable of some scary emotional intensity. Hill says his movie was partly inspired by Taxi Driver, and the influence is visible. But it’s also a bit like The Office. Once again we’re asked to embrace a delusional egomaniac whose inflated self-image is so cockeyed you can’t help but feel for the the poor slob, while laughing at his pathetic ambitions. But in this case, the behavior is so toxic there’s virtually no room for empathy

But my resistance to embrace this film—even though I like the idea of a subversive, satirical anti-Paul Blart mall cop comedy—is that I had trouble believing it. And that’s not a performance issue. Or even a moral issue. Even on its own broad terms, the story is thin and ragged, the dialogue unconvincing. Every scene, every line seemed calculated for sheer effect, at the expense of suspending our disbelief. One could argue that’s the whole point of this kind of comedy: we are supposed sit there in wide-eyed disbelief as we watch this cuddly Canadian recast as a vessel for all the ugly anger of white working-class America. But no matter how well Rogen acts the part, his anger comes off as a stunt, a sadistic gag. The movie is simply not credible; it comes off as hard-core smarty-pants sketch comedy. In subverting the rom-com formula, the filmmaker ends up with a movie that’s not very funny—despite a few hysterical moments—and not very moving. Despite Rogen’s best efforts, the character of his psychotically insecure security guard seems wildly inconsistent, and not just because he’s bipolar. The problem: the movie is bipolar.

To read my piece in last week’s magazine about the mall cop movie phenomenon, go to: What is it with mall cops suddenly? 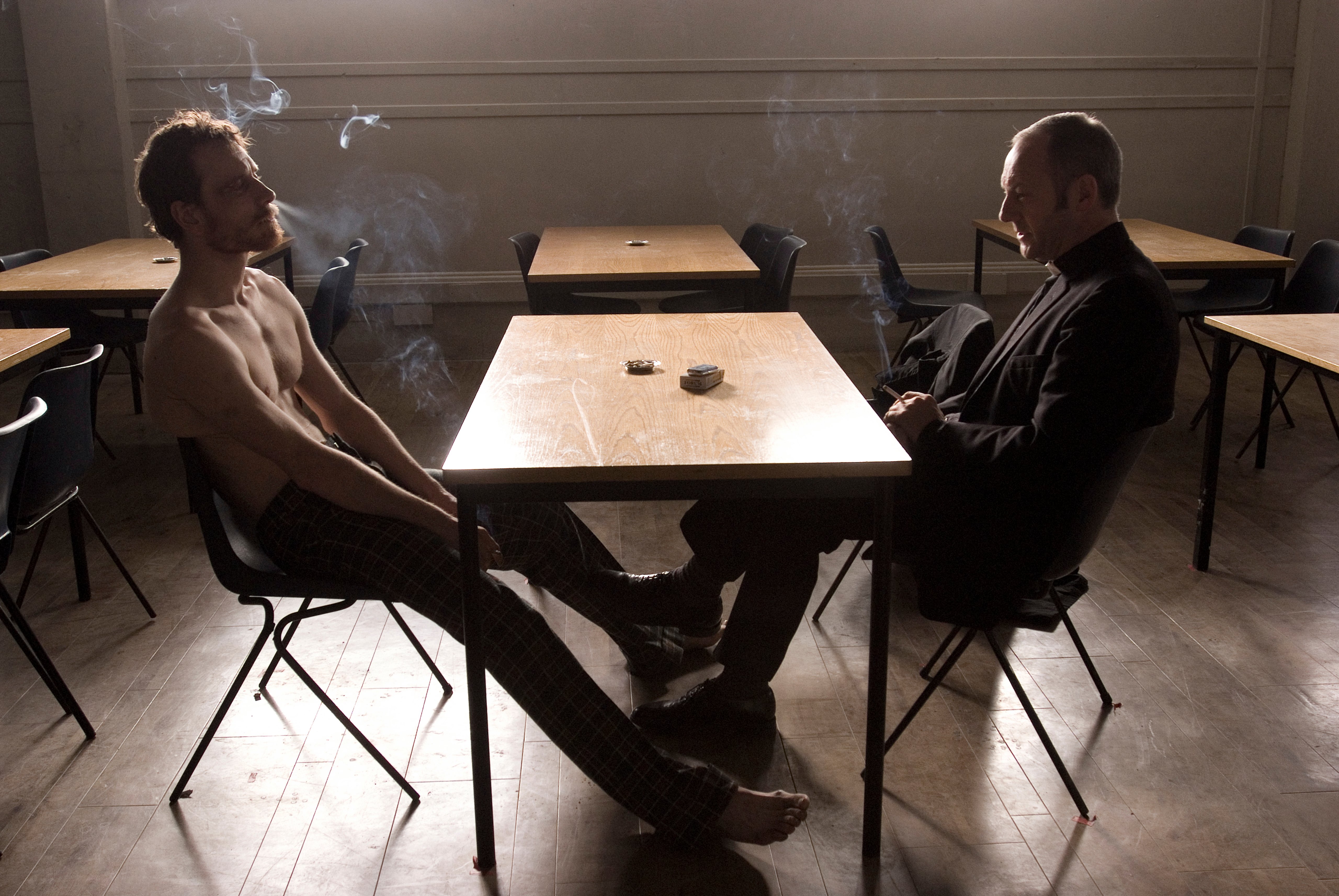 This graphic drama about the IRA hunger strike in Northern Ireland’s Maze Prison is one tough film, utterly compelling, and no picnic to watch. It takes no prisoners. The story begins with a no-wash strike—a harrowing, maggot-ridden ordeal of prisoners wearing nothing but overgrown beards who are beaten and tortured in cells while they smear the walls with their own excrement. The filth and torture sequences, which are almost wordless, are followed by a 22-minute, uncut stretch of staccato dialogue between IRA militant Bobby Sands (Michael Fassbender) and a priest (Liam Cunningham) who tries to talk him out of the strike. The scene is a theatrical tour de force. Then we come to the hunger strike itself. It transpires as an ethereal trip into a palliative afterlife, featuring actors with gaping sores who are so alarmingly skinny they could teach the cast of Schindler’s List a thing or two about dieting. Director Steve McQueen finds beauty in the squalor. And to his credit, he doesn’t sermonize or take sides. He shows the conflict from the guards’ point of view as well as the prisoners. You takes you inside it until you lose your bearings, and your appetite. You might think twice before order a big tub of popcorn for this one.

An excerpt from McQueen’s “director’s statement”:

“I want to show what it was like to see, hear, smell and touch in the H-block in 1981. What I want to convey is something you cannot find in books or archives: the ordinary and extraordinary, of life in this prison. Yet the film is also an abstraction of what it is to die for a cause.
Hunger for me has contemporary resonance. The body as site of political warfare is becoming a more familiar phenomenon. It is the final act of desperation; your own body is your last resource for protest. One uses what one has, rightly or wrongly.
It is important to me that the events are shown through the eyes of both prisoners and prison officers. Within the film there has to be time as well for reflection. There is a long conversation between Bobby Sands and a Catholic priest about Sands’s decision to go on a hunger strike. The exchange becomes a philosophical chess game with high stakes. They have to discuss the nature of sacrifice. “Freedom means everything to me… Taking my life is not just the only thing I can do, it is the right thing”.
In the end we are alone with one man, living out his last days in the most extreme manner possible – but only one decision away from choosing to surrender and live. The simplest physical action becomes an odyssey.
In Hunger there is no simplistic notion of ‘hero’ or ‘martyr’ or ‘victim’. My intention is to provoke debate in the audience, to challenge our own morality through film.”

He has succeeded admirably.