No time for sentiment as Jays force Game 5 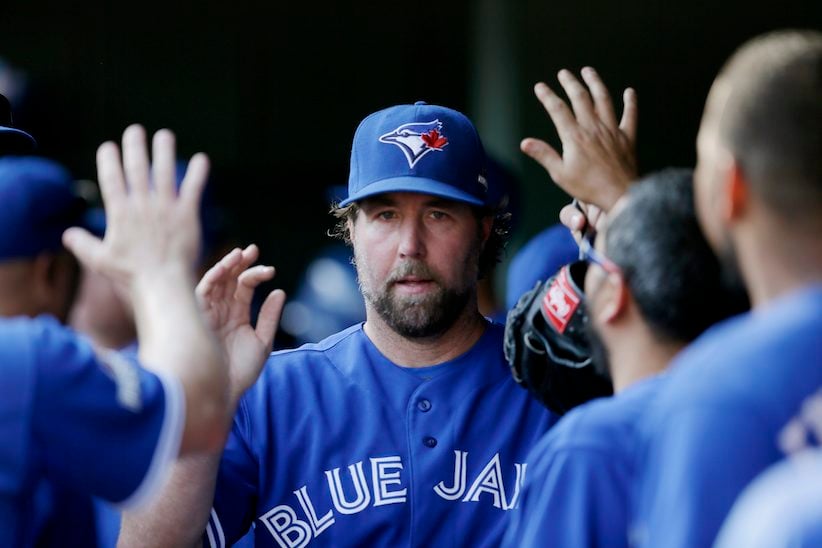 ARLINGTON, Texas – Take nothing for granted in the post-season, no matter how big a lead is, no matter how comfortable an advantage seems. The Houston Astros thought a trip to the American League Championship Series was in hand with a 6-2 lead six outs away from victory; instead they’re heading to Kansas City for a decisive fifth game against the Royals carrying some major bullpen baggage.

A little bit of momentum can go a long way in the playoffs, when the margin for error is slim and the magnitude of the moment can be both a blessing and a burden. Which is why at Globe Life Park, some 400 hundred kilometres north of Minute Maid Park, Toronto Blue Jays manager John Gibbons ran an 8-4 victory over the Texas Rangers that forces a decisive fifth game in the American League Division Series like it was a white-knuckle, one-run contest.

Needing to again fight off elimination to get to Wednesday’s 4:07 p.m. ET contest at Rogers Centre, Gibbons had David Price and Marcus Stroman loosening up in the first inning behind R.A. Dickey, despite leading 3-0 at that point, and then pulled the knuckleballer for his ace left-hander with one on, two out and Shin-Soo Choo due in the fifth, up 7-1.

Gibbons’ aim was not only to keep the Rangers from gaining any momentum – he was intent on suffocating them, even if Dickey was one out from earning the win in his first career post-season game, against the team that drafted him and converted him into a knuckleballer.

The Blue Jays understand this isn’t the time for sentiment, just as they did when they left Mark Buehrle off the post-season roster.

Price delivered precisely what Gibbons wanted, getting Choo on a fly ball to centre to end the fifth, and worked three innings – allowing a two-out Robinson Chirinos RBI single in the seventh plus a Mitch Moreland run-scoring groundout and Elvis Andrus RBI single in the eighth. Aaron Sanchez blew away Drew Stubbs to end the frame before Roberto Osuna wrapped things up in the ninth.

Stroman, meanwhile, threw a side session during the eighth inning and is positioned to start Game 5, when the Blue Jays will try to become just the third team to come back from a 2-0 deficit in the division series after losing the first two games at home.

Cole Hamels is likely to start for the Rangers, setting up a potential rematch of Game 2.

A club record three-homer barrage against Derek Holland that stunned a crowd of 47,679 on an oppressive 32C afternoon set this up to be an easy one for the Blue Jays, even if Gibbons didn’t treat it that way, as the offence continued to reawaken.
Adrian Beltre was a surprise addition to the Rangers lineup at third base about an hour before game-time as his tight back loosened up enough for him to move poorly around the diamond, but any lift from that didn’t last long.

Ben Revere opened the first with a bunt single, Josh Donaldson followed with a two-run shot to right field and five pitches in the Blue Jays led 2-0. Chris Colabello added another opposite field shot in the first before Kevin Pillar launched a solo shot that Price caught in the bullpen in the second.

The Blue Jays tacked on three more in the third as Jeff Banister stayed too long with Holland, who got yanked after a Donaldson walk and Jose Bautista single. Colby Lewis took over, surrendered a run-scoring fielder’s choice to Edwin Encarnacion, an RBI double to Chris Colabello and a run-scoring single to Pillar that made it 7-0, and it felt over at that point.

Choo scored on a wild pitch in the third, and Dickey cruised until Chirinos’s one-out single in the fifth. After a Delino DeShields fly out to deep centre, Gibbons came in to get Price.

Pillar’s RBI single in the seventh made it an 8-1 game, but the Rangers chipped away in the seventh and eighth, although the game never risked veering from the Blue Jays control.

Had Gibbons turned to his secondary relievers under the circumstances to bridge the gap from Dickey to Sanchez and Osuna, might the Rangers have found life? Would they have rallied?

The Blue Jays didn’t risk finding out, and are a win away from an unlikely trip to the ALCS as a result.