Nobody Likes P.I.s No More? 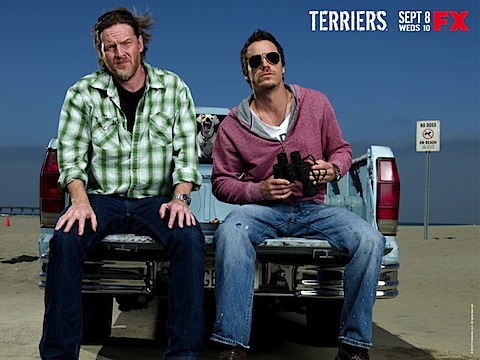 I still hope Terriers finds its way to Canada at some point (or to a DVD) because I now think it’s the best new show of the current season. This is not saying very much, but it would even be one of the best shows in a good season. The new broadcast shows are “yes, but” shows at best — shows that have potential but haven’t fulfilled it. And on cable, the same mostly applies: Boardwalk Empire is a more exciting show in theory than it is to watch (so far), and while I know most critics I respect have come around to Rubicon, I still don’t like it. (These last two shows may benefit from the “halo” that surrounds both HBO and AMC; I know that if Rubicon weren’t an AMC show I’d feel less guilty about not liking it, but from pilot to finale it has struck me as a very by-the-numbers show, especially the dialogue, which has the same kind of functional, personalty-free style that sinks a lot of procedurals. However, I hasten to add that many people I know seem to like it, and the showrunner has some interesting things to say about it. It’s just not for me.) But Terriers is the real thing, a show that started good, got better, and knows exactly what it’s trying to be. Is it a great show? I don’t know and at this point I don’t care; it’s just about the only new show I can watch without wondering whether it will ever be able to live up to its potential. It already has, and it’s a smart, dark, modernized take on film noir the Stephen J. Cannell style of private-eye show about loser heroes. It has the serialized storytelling that FX viewers expect, yet it handles the necessary weekly cases more confidently than, say, Veronica Mars. The performances are good, funny and moving by turns; the characters are individualized — including the guest characters — and the whole thing just feels like it was made by pros. (Update: In response to a discussion in comments, I should clarify that the weekly cases don’t dominate or overpower the show they way they did on the first season of Angel. The show is already using the cases as a vehicle for revealing character, not for their own sake.)

And yet the show is unwatched. Not even unwatched by the standards of something like Rubicon, which has few viewers but is doing just enough that AMC might consider bringing it back for another 13 episodes. Terriers gets less than 500,000 viewers, on a network whose biggest hit drama, Sons of Anarchy, gets over 4 million an episode. Justified, a similar — and also good — series on the same network, got 2 million viewers an episode. There are plenty of explanations as to why Terriers isn’t a success, including the title, which is widely considered terrible and un-indicative of what the show is about. But poor promotion or a bad title can explain a few ratings points; when a show does this poorly, it’s because people simply don’t want to watch it. And yet it’s hardly an inaccessible show, and many shows that might be considered darker, or more morally ambiguous or confusing have gotten better numbers.

It’s hard to know why a show is rejected — we already went through this with Lone Star, and no one really knows why it did so much worse than even unsuccessful shows — but one pattern I’m starting to see is that the P.I. genre is hard to pull off these days and especially hard to pull off in the U.S. (Outside of the U.S., shows like Republic of Doyle have managed second-season renewals, which I’m afraid will be denied Terriers unless a miracle happens.) As Flashpoint and Rookie Blue writer Adam Barken put it on Twitter, “Nobody has made the PI thing work in the US recently, except superhigh concept stuff like Burn Notice. I think it’s too downscale.”

There are three things that I think help account for this, two macro (the overall style of the show) and one micro (the way individual episodes are set up). The first macro thing is that P.I. shows in this Rockford Files vein focus on people who are, as I said, losers. They’re not successful people, they’re worried about money, and they don’t live glamorously. They are, as Barken puts it, “downscale.” (This separates them from P.I. shows like Magnum or Burn Notice, which create some glamour for the characters that the Doyles or the main characters of Terriers can’t have.) People who are down on their luck remain a tough sell in today’s TV, not just on big networks but everywhere. You can sell people who suffer horribly, as long as they don’t spend a lot of time worrying about getting paid.

The second macro thing is that U.S. TV today is almost completely skewed toward people who work within the system. All the procedurals are about “elite teams” who work for and mostly trust the government; the HBO shows are about crime organizations or vampires that follow a certain structure and set of rules. What’s rare is the drama about either one or two rogue cops, or one or two people bucking the system in some other way. (Fox tried The Good Guys, a throwback rogue-cop show from the creator of Burn Notice, and it’s gotten terrible ratings.) It might just be a function of the large casts that modern dramas require; if your only main cast members are Mulder and Scully, you can have two people bucking the system, but when you have to have an Elite Team of six or seven people all participating in the episode, a sense of order and structure is natural. But whatever the case may be, it’s just much harder, even on cable, to make a show about people who are outside the system. There’s better luck in doing a show about a team of people who are outside the law but who have order and structure within their own group, like the biker gang on Sons of Anarchy.

The micro thing is that the P.I. show requires a structure that is hard to pull off in today’s TV, which is built around big attention-getting moments. The basic point of the P.I. show — and especially the semi-realistic P.I. show where they’re not investigating active homicides and other things that P.I.s can’t handle — is that the detectives start by accepting a seemingly small case, which blows up into something bigger than they expected. (Classic example is of course The Maltese Falcon: a woman hires a detective to tail a man she claims is living with her sister; it leads to murder and leads the other detective to uncover a big conspiracy surrounding a jewel-encrusted bird. The job she initially comes in with is the sort of job a detective might actually be hired for.) The detective can get into unexpected trouble because of the job, or it can lead to a larger conspiracy, or it can reflect back on the detective’s own personal troubles, but the point is, it starts out small. This week’s Terriers had them being hired to recover a ring. That’s not what the episode was ultimately about, but what the episode starts with might have something to do with the question of whether it can hook a lot of people.

Because it could be that when stories start small, they’re hard to sell. Justified, which as I said is a similar show in a lot of ways (including the way it gets more and more serialized as it went on, though I’m hoping it will not become a full-blown serial in its second season), offers bigger cases and more frequent violence. Sons of Anarchy often knows how to get something big in during the cold open, and anyway the whole premise is big. Terriers has its share of murders and deaths, but some weeks it can’t have the big opening any more than Chinatown could. It frequently has to start with something small and dirty. Imagine David Caruso making one-liners about dirty pictures and missing rings and you’ll see the spot that Terriers is in.