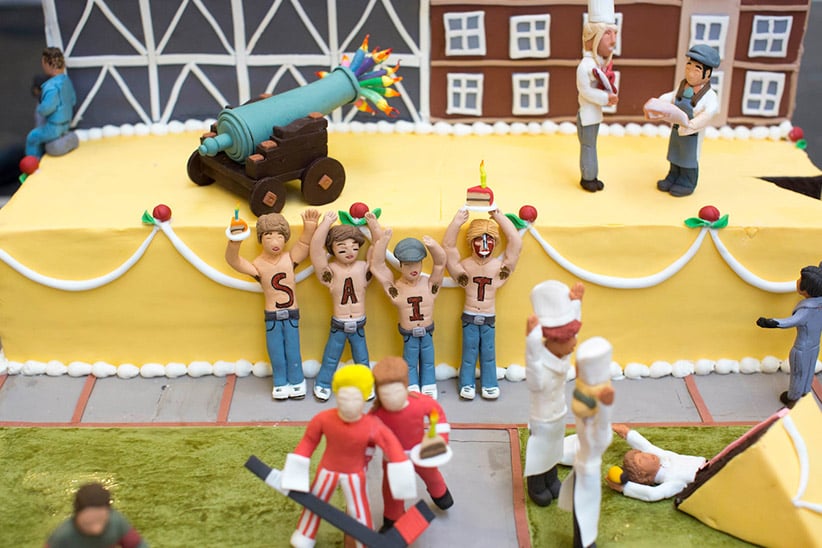 Rose Warden didn’t sleep much the night before Oct. 16. The next day, the baking instructor at SAIT and her large team would be unveiling the result of 1,200 hours of work—a 315-kg birthday cake for the polytechnic’s 100th birthday.

“I was up until 3 a.m. last night,” Warden said after the centennial cake was unveiled. “There were some hiccups along the way. It’s been such a frenzy.”

The colourful confection, which ended up offering over 2,000 servings, drew hundreds into the Stan Grad Centre to take in the culinary marvel—and to enjoy their own bite of sugary SAIT history.

The school started in 1916 with 11 students in a borrowed building. They had two drill presses, two lathes, a motorcycle and a donated car. Now, the Calgary polytechnic boasts 50,000 students every year and more than 250,000 alumni.

It took months of preparation by chef Warden and her team of fellow instructors, SAIT students and members of Calgary’s Sugarcraft Guild to design and bake the massive cake, which included Rice Krispies among its layers of chocolate and vanilla. Warden says it was important that the cake represented the many decades of teaching and learning the SAIT community has undertaken. 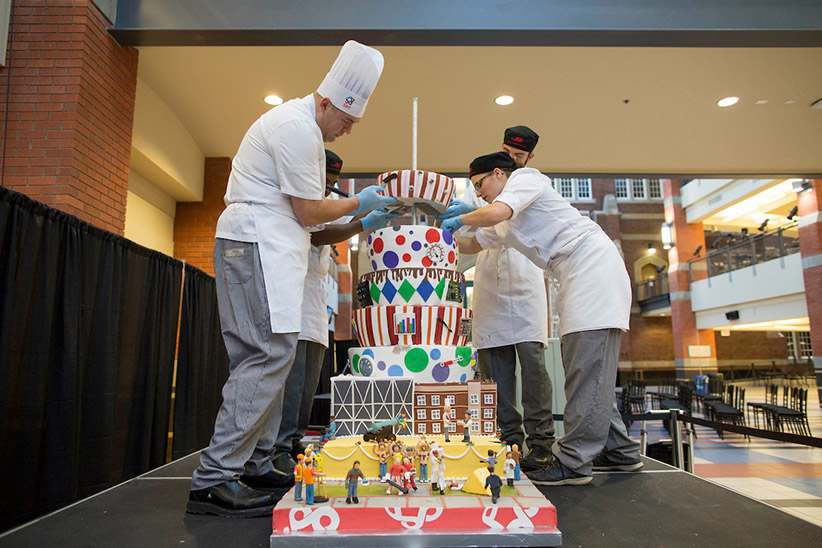 SAIT’s centennial project director, Cathy Downey, called the anniversary a milestone not only for the school, but for the city of Calgary. “SAIT is getting increasingly recognized on a global scale,” she says. “We’re excited to continue educating people and to work in our community.”

Much of that community was reflected in the cake, which featured the Rocky Mountains and the Calgary Tower as well as prominent SAIT buildings. More than 100 unique figurines made from fondant adorned the cake, including students from various programs and prominent figures from SAIT’s history, such as the school’s first female president, Irene Lewis. Each layer represented a different program at SAIT.

Warden put a call out to the SAIT community in March, seeking input on the celebratory creation. “Everyone said they wanted to see people,” she says. “So we thought, ‘Let’s put people on the cake and make it look like they’re building the cake.’ ”

Warden says her favourite part of the process is when a knife slices through the cake for the first time. “I love that moment the best,” she says emphatically. “That’s when things come full circle. That’s the reason why we do it—so people can enjoy edible art.”