Not Being John Malkovich 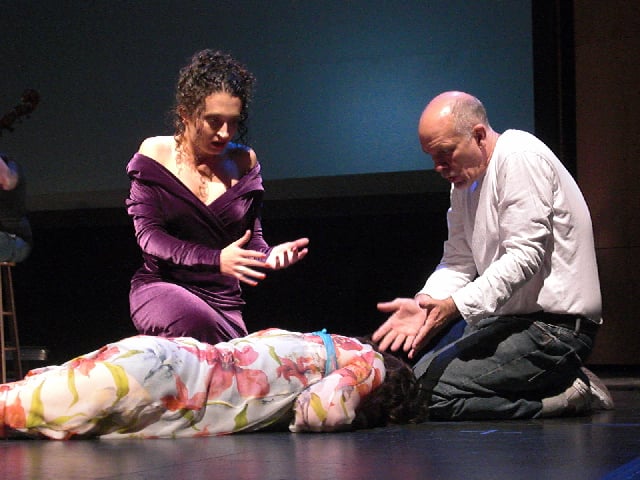 From the sadistic Valmont in Dangerous Liasons to the countless psychos in Hollywood thrillers, John Malkovich has developed a knack for portraying smug, gleeful cruelty. So when he first stepped onstage last night at Toronto’s Massey Hall, the audience could be forgiven for briefly confusing the actor with his character—Austrian serial killer Jack Unterweger. The occasion was the Canadian premiere of The Infernal Comedy: Confessions of A Serial Killer, the show that opened Toronto’s fourth annual Luminato festival (June 10 – 20). As a crowd-pleasing mix of theatre and opera, high art and shameless showbiz, the piece served as an apt kick-off for Luminato’s multi-media extravaganza. And for those of us who have never seen Malkovich onstage, his star-turn was something to behold.  After the 30-piece Orchestra Wiener Akademie had performed an awkward onstage tuning ritual, and conductor Martin Haselböck had bounded from the wings, warming up the house with some suitably enervating orchestral melodrama, Malkovitch casually sauntered into the spotlight wearing a white suit, black polka dot tie and gleaming smile.  He sucked up the inevitable generous ovation, then proceeded to work the crowd like a cheesy comic on a road tour, wading into the aisles, and tossing out local references to Massey Hall and Quebec. Until his halting Austrian accent sank in—confirmed with a Schwarzenegger gag—for a moment it wasn’t quite clear just what kind of celebrity moment was being celebrated. Were we being warmly greeted by a movie star or a serial killer? A bit of both, perhaps.

The conceit of The Infernal Comedy is that Jack Unterweger is on a book tour from the grave, out to make a buck from the voyeurism of his audience, and dismissing the show’s baroque staging as his publisher’s idea. He defends his murders by saying that, without them, he wouldn’t be who he is and no one would have shown up to see him. Unterweger, as we learn through the actor’s monologue, was sentenced to life in 1976 after being convicted of murdering a teenage girl. His devious good behavior and intellectual output so impressed authorities that he got early parole. When women started turning up dead after his release, he investigated the crimes as a journalist, and even collaborated with police. He went on to many murder prostitutes in several countries, strangling them with their bras, until he was finally caught, hanging himself on the very day he was handed a life sentence without parole, in 1994.  Jack addresses the audience as if they’ve come to see a kind of carnival freak. He makes us complicit from get go.

But the real conceit of the The Infernal Comedy is conceit itself—the performer’s limitless self-regard and blithe insouciance. And you feel Malkovich can play this role in his sleep. His Jack redefines entitlement. That includes insulting the orchestra (“Normally I don’t like this kind of music”) and periodically strangling the two lovely sopranos (Bernarda Bobro and Marie Arnet), who represent various women in his life. The show’s other conceit is deceit. Explaining from the start that he is a pathological liar, Jack presents himself as ultimate unreliable narrator. How can we be expected to believe a man who claims to have built his entire life on misdirection, from his first conscious memories as a baby? Can even that be believed? And at one point, to compound the shaky relativism, Jack even hauls a laptop onto the stage to look up his Wikipedia entry, which is, of course, riddled with errors. According to the liar.

Highly conceptual, this is an upstage/downstage show. Out front, Jack delivers his grinning lounge-act sophistry to the audience, spiking it with hometown shtick. (“I don’t want to play at Massey Hall. I want to play at Canadian Opera House, at Four Seasons. I don’t want to stay at Sheraton; I want to stay at Four Seasons.”) But as the singers blaze through classical arias, he wanders about upstage, as if absently rummaging through his unconscious, and re-enacts his chilling crimes. This disturbing shuttle between feel-good showbiz and lugubrious horror by a character who seems utterly without boundaries puts the viewer strangely at odds with the actor. In order to fully fathom the gravity of this divine comedy  (written and directed by Michael Sturminger), we have to reject the performer. And when Malkovich takes his bows, although he has made the business of playing sweet, slippery evil seem effortless, it’s still hard to stop resenting him for it.