Noted at Manning Conference: The government on vacation

Conservatives are nervous, but they are not organizing to take Harper down 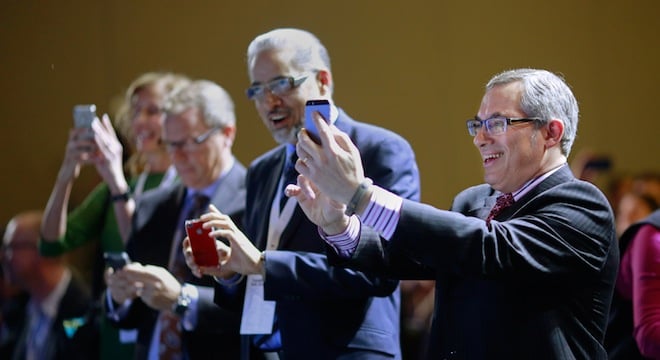 It is indeed tempting to see the Manning Networking Conference, an annual mostly conservative group hug whose 2014 edition wrapped up yesterday, as the expression of some fringe opposition to Harperism. Preston Manning himself is too gentle to make such a case himself, but clearly he wants to open up a little room for debate on the right end of Canadian politics.

The theme of this year’s meeting was “Next Steps,” and at times it felt like a beauty contest for potential post-Harper Conservative Party leadership candidates. Jim Prentice was here, and Brad Wall, and Jason Kenney and James Moore speaking simultaneously in different rooms. And there were tantalizing bursts of heterodoxy. Mike Chong showed up to peddle his Reform Act, but Jay Hill, pressed into service to rebut him on behalf of Conservative party orthodoxy as a former chief whip, expressed his own wish that the level of partisanship in the Commons could be reduced through more modest rule changes. Prentice asked Conservatives to be nice to environmentalists and First Nations organizations. Manning was skeptical about Pierre Poilievre’s Fair Elections Act. A pollster said the Trudeau pot ads aren’t working. Brad Wall suggested there’s room for more big thinking in Ottawa, and told me he wishes Stephen Harper would get back to China sooner rather than later. Even staunch loyalists felt free to sing the Conservative song their own way instead of the PMO’s. James Moore argued his is “the party of nation-building;” decried most provinces’ willingness to let Canadian history remain an optional subject in high school; and talked up a program called Ready, Willing and Able that helps working-age Canadians with developmental disabilities find good work.

It was all so bracing! Everyone got to say what they wanted. Reporters roamed freely in and out of any session they liked. Nobody gave anyone any lip, Liberals and New Democrats at the event were not bugged and did not bother handing out snarky-snark paraphernalia, and there was even potable water and food in the media filing room. Basically it was the attitudinal mirror image of the Conservatives’ last official party convention in Calgary in November.

But you didn’t have to scratch the veneer of anti-Harperism, or even cheerful non-Harperism, hard at all before it came peeling right off. I couldn’t find anyone, even from the more centrist reaches of the party, even speaking on guarantees of anonymity, who felt Harper should be put out to pasture promptly so one of this weekend’s guest speakers could replace him. Wall told me he doesn’t want the job and couldn’t fulfill one of its main requirements — speaking serviceable French — even if he was interested. While Prentice spoke, people came streaming out of the conference hall cradling their heads and remarking on how, well, boring he was. And representatives of down-the-line Harperite orthodoxy, like Pierre Poilievre, showed up with a smile, shook a lot of hands and listened to the discussions, and left without (as far as I could discern) taking down names for later extermination at the hands of the 25-year-olds in short pants. (Fun fact: the average age of PMO staffers today is about what it’s been at every point in my 20 years in Ottawa, and none of them wears short pants to work.)

Conservatives are nervous, and they spent spectacularly too much time talking about how Justin Trudeau doesn’t scare them, ha-ha, who, that punk kid?, not on your life, ha-ha. But they are not organizing to take Harper down. On Monday, all of them will be back on their jobs, doing what the prime minister wants in the way the prime minister wants it done. The Manning Conference, as expressed by its Ottawa participants at any rate, was not the expression of a durable faction. It was a chance to take a break from scowling, finger-pointing and message discipline, the better to do more of all that stuff once work resumes.

Here’s the extent of the movement’s general willingness to stick with the horse it’s been riding for 12 years: Manning always likes to talk about better environmental protection and a conservatism that embraces conservationism. But for the last two years, the biggest crowds and the heartiest applause have been for guest speakers — Mark Steyn this year and Ron Paul last — who think the global-warming movement is a fraud designed to justify higher taxes and a more intrusive state. If Stephen Harper ever deigned to show up at one of these conferences, and (pushing hypotheticals still further) if he were to sit onstage in the main hall and take questions for an hour, he needn’t fear what this crowd would throw at him.