Timed to the release of the Ron Howard movie, the original interview is more compelling than ever. 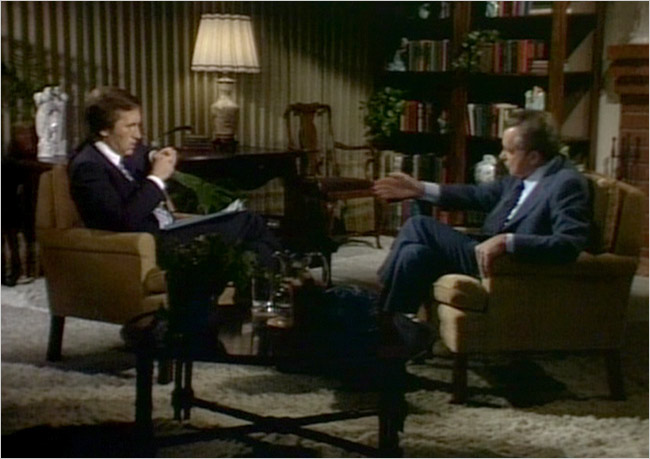 Writing this on a flight to Vancouver, en route to the Whistler Film Festival. And on this momentous day of prime ministerial prerogative—the proroguing of Parliament—I’ve just witnessed another famously devious politician wriggling on the pin of history: former U.S. President Richard Nixon. I’ve been watching Frost Nixon: Watergate, a newly released DVD of David Frost’s landmark interview with Nixon about his complicity in the Watergate cover-up. This is not to be confused with Frost/Nixon, the Ron Howard movie that opens this week, adapted by screenwriter Peter Morgan from his own Tony-award-winning play. (To read my review of that, go to: Still the interview of the century)

I never saw the original interview, which played to a record audience of 45 million viewers in May, 1977. At the time, I was too wrapped up in movements protesting everything Nixon and his ilk represented to watch his swan song on TV. In fact, I didn’t own a television. Discovering Frost’s Watergate interview over three decades later is a revelation. It’s mesmerizing. But at this point, if you plan to see the movie (which I recommend), see it first, then rent the DVD of the real thing. It’s better to watch the compressed,dramatized version before seeing what actually happened. Besides, much of the movie is devoted to the cat-and-mouse intrigue of how the interviews were negotiated, and how these two careers—of a British broadcaster gambling his career and an ex-president gambling his legacy—coincided in a conflagration of hubris.

The movie (like the play) carves a steep and slender dramatic arc from a mountain of fact and 28 hours of Frost’s taped interviews with Nixon. The story culminates with the final session on Watergate, but only the highlights reach the screen. The edited hour-long interview, presented on the DVD along with some of Frost’s later recollections, conveys quite a different sense of what took place.

First of all, it’s a luxuriously long and intimate encounter, with a sense of real-time rumination that comes across as a marvelous anachronism in the context of today’s journalism—i.e. it’s something that’s inconceivable in this age of Larry King rationing power bar packs of infotainment between blasts of junky red-white-and-blue graphics. Much of the session unfolds more like a debate than an interview. And Frost comes across as a more substantial prosecutor than the lightweight talk show host portrayed in the film.

But the movie unfolds like a prizefight. Frost is the underdog contender, battling shrewd Tricky Dicky, who dances circles around him for most of the interviews—dropping his guard only in the Watergate round. And the drama hinges on that eleventh hour reversal.

In the original interview, as Frost peppers Nixon facts and arguments,  Nixon parries them almost with relish, as if, one way or the other, he seems secretly pleased to have his day in court.  Nixon’s eyes, shifting and wary, are fascinating to watch, especially in the reaction shots to Frost talking. They’re more revealing than anything he says.  You can see him calculating ever move. In the end, there is no devastating knockout blow. Frost slowly pushes Nixon towards the brink of confession and apology, but when it happens, Nixon seems totally in charge. He spills his emotions indirectly, as a raconteur describing the scene in the Oval Office when he teared up in front of his closest colleagues before announcing his resignation. In other words, he locates his emotions, and tears-up in the Frost interview, by recollecting and reconstructing a  scene from his past, as if he were watching himself in a movie.

In that sense,  Richard Nixon had already begun to dramatize—and fictionalize—his confession, even as he was making it.