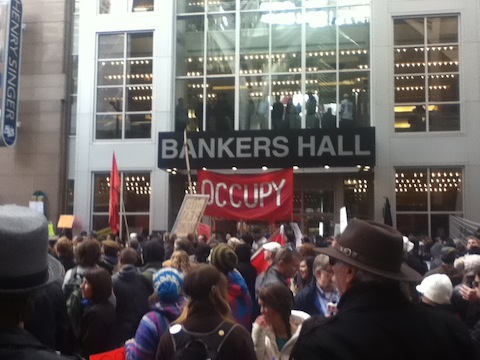 By chance, I was on scene for the initial stage of the Occupy Calgary event last weekend. The Occupants, exhibiting the same implacable literalism as the terrorists who thought the World Trade Centre was somehow crucial to world trade, had descended upon the courtyard of the city’s Bankers Hall complex. But they posed no particular threat to any banking activity, legitimate or otherwise. Mostly they just impeded pedestrian access to a shopping mall for a little while, creating an ephemeral nuisance to a few small businesses. They did have one Starbucks quite effectively hemmed in, but if my back-of-envelope calculations are right, they indulged in just enough corporate caramel macchiatos to make up for it. Soon the mob shambled off to Olympic Plaza, where I gather they are still struggling to bring about Year Zero.

As an observer, I had the incalculable advantage of not being able to make out any of the speeches that were being delivered to the crowd of roughly 200 protesters. I was able to enjoy the protest as a purely social phenomenon—precisely the light in which I think the Occupancies are probably best viewed. Urban existence is inherently somewhat lonely for the best-equipped and most conformist among us. How much lonelier must it be for the semi-employable crackpot, the born-too-late hacky-sacker, the dyspeptic Social Credit pamphleteer, the lesbian anarchist who dislikes the other four lesbian anarchists in town?

The Occupants have been scorned as bored, mollycoddled trust-fund kids, but in Calgary they spanned the generations. This may, indeed, be part of the fun; people who don’t go to church no longer have much opportunity for face-to-face intergenerational amity. It goes without saying that the protest was also a supreme dating opportunity; those who came with tents carried their own ready-made makeout venues.

Some participants appeared to be engaged in an unapologetic search for attention, and many appeared to have misplaced the correct date of Halloween. One pretty but weirdly stern-faced girl put on a long display of hula-hoop expertise; watching her gyrate, I could not easily account for the thought process that led her to wake up that day and decide that her hula hoop was just the thing to to smash the corporate state once and for all. (What ever happened to good old dynamite?) But if you are good with a hula hoop, how many opportunities do you have to display that ability?

To join the Left and participate in street politics is to join a tradition, to link oneself up with a heritage of activism; there is no simple analogue on the Right, which prizes tradition as a principle but does not favour theatrical open-air protest (with exceptions for partisans of particular issues, notably abortion). It is safe to say that every Occupy Someplace attendee who has any awareness of history thinks himself engaged in creating a distant echo, however hollow and distorted, of Selma and Greenham Common and the Free Speech Movement.

But this is cargo-cult protest, a series of motions without meaning. There are no stakes to speak of, there is no target, and the Occupists are hazarding nothing more than a few hours in plastic handcuffs. They do not even have any demands. In fact, they insist quite firmly upon this point—that Occupying is somehow a mystical expression of unity and collectivity, but one in which the participants explicitly have no common aim, no shared principle to urge, and no intention of changing anything in particular at all.

Except, perhaps, by offering an example of peaceful protest itself. The medium is the message, right? Yet even this content-free agitation, this strait-laced, narcissistic example-setting, isn’t going so well. It turns out that the philosophy of total inclusion and “consensus” decision-making cannot scale up to the size of a corner of a city block without a certain amount of chaos, filth, and recrimination. One is tempted to suggest that the “marginalized”, the “disenfranchised”, and the “voiceless” are doing a reasonably good job of demonstrating how they got that way.

Is it really any wonder that an inner-legion capitalist demonoid like Mark Carney would praise the Occupants? They are the best advertisement that the “1%” could possibly have devised. At a time when finance, partisan politics, and big business are testing the faith of even their most expert practitioners, the Occupy Everywhere movement is out there on the streets, flooding the news audience with Reaganite hormones and hoisting the Protestant work ethic from its deathbed. Be honest, now: doesn’t reading about these people make you want to go out and put on a hard hat?

Picking on the Occupiers will bring forth a torrent of defenders to say “Well, what about the Tea Party?” And I suppose that this is a very good answer. The emptiness and incoherence of the Occupy Everywhere protests provides a hint that the equally incoherent Tea Parties are also open to the Bowling Alone analysis; these “protests” are a spontaneous response to secularization and alienation, and probably without much political potential—little more, really, than a means for the hurt and angry and confused to recognize like minds and to know that they are not alone. The Tea Parties are beset by mirror-images of the same camera-hungry attention-whores as the Occupiers, and where the Tea Parties attract footloose retirees in RVs, the Occupy protests draw distracted grad students. (This being the Viagra era, the RVs may be as active as the tents.)

The Tea Partiers, notoriously, look back to a past of self-reliance and minarchism that never quite was; the Occupants dream of a future of perfect social justice that cannot be. The crowds share only an irksome, poorly-elucidated sense that something is not quite kosher in America, that the common man is the mark in an ongoing con. Mercifully, it is hard to imagine a leader or a vanguard that could merge and exploit them.