Off with the hedge fund manager’s head!

Pointy-head intellectuals and the media are the Red Guard, Wall Streeters the accused 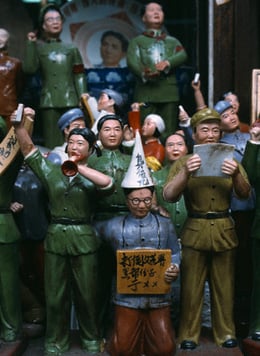 Accused members of the intelligentsia in Mao’s China were marched through the streets wearing cone hats on which were written evocative slogans such as, “Down with the foul intellectual.” Placards identified the wearer as a stinking counter-revolutionary. This was all in the spirit of the times, summed up best for me by a People’s Fine Art poster captioned “Whoever is anti-Chairman Mao will get his dog head broken.” Succinct and to the point.

Those 1960s and ’70s marches, complete with stops at which foul intellectuals would kneel and allocute to the mobs, are not so different from the modern American perp walk. These days it’s the pointy-head intellectuals and the media class that are the Red Guard, and Wall Streeters the accused. Every night, some TV station posts photos of the day’s addition to the Top 10 Business Villains and another fund manager is added to the list of foul CEOs. Most have not been charged with anything—yet—but in the frenzied search for “whodunit” are singled out as forces behind today’s economic crisis. We are living through a collective madness, all part of the mob, finger pointing, judging, some driven by fear of economic chaos, others enjoying the schadenfreude express. Old labels are reappearing. After listening to a radio discussion about “economic criminals,” I wondered when we would start fingering “rootless cosmopolitans.” The Soviets and the Chinese preferred the first term, the anti-Semites the second, though in the Soviets’ case the two were often interchangeable.

I suspect current economic criminals resemble past ones in that they come in two varieties: the ones who really commit economic crimes and the ones who are elevated by political fashion to the status of criminals. Stalin’s taste made economic criminals of the entire kulak class; kulaks in today’s America would include CEOs and Tom Wolfe’s Masters of the Universe. Certain titles such as “hedge fund manager” have become terms of disapproval that trip off the tongues of people, at least half of whom I suspect have utterly no idea what a hedge fund is. The matter is complicated by the lunatic behaviour of the management of some companies. When the taxpayers are giving and loaning you billions, paying yourself massive bonuses is simply Alice in Wonderland en route to the guillotine. Recipients may actually believe they deserve the loot for hard work in difficult times—no criminal intent—but their behaviour is so inappropriate that the very fact it isn’t a crime is even more aggravating.

“The business of America is business” was okay back in the ’20s when the fabulously successful self-made entrepreneur was admired. People noted his shortcomings—coarseness, self-seeking, a lack of sophistication—but self-made man was the American hero. This was before he metastasized into corporate man, the product of sophisticated and computerized capitalism. This version, demonized by the media and Hollywood (the place where crass business people castigate crass business people in films like Wall Street), was a white vampire, deracinated, living in a smooth world of screens and luxury while draining the lifeblood of ordinary folk in phony paper ventures. In the ’60s, the powerful intellectual classes emerged fully in America and their preoccupations and tastes permeated the record of the times, largely because they were keepers of that record. The entrepreneurs and businessmen building America—making the record—had completely different tastes and values; abrasions between record maker and record keeper were deep.

Sensing enmity, businessmen tried buying off critics by endorsing notions they found politically expedient or politically correct. In so doing, they burdened their businesses with extra spending and contributed to a climate that only encouraged the political class to bear down on them with more regulation. Looking at the brochures of some widget makers you’d think you were reading the memoirs of an environmental activist. Under the heading of “Managing the Way We Do Business,” HSBC announced it is developing the Climate Change Centre of Excellence and taking part in the Carbon Disclosure Project “that facilitates dialogue between shareholders and corporations on carbon emissions.” HSBC is a strong, well-managed bank. Still, given the 400 HSBC-owned branches just closed in the U.S. and its chairman’s hope that the government will revise unhelpful financial rules, HSBC’s “dialogue” might more usefully have targeted political emissions.

Whatever the solution to hard times, hysterical denunciation cannot help. Businessmen failed to placate critics by becoming politicians just as government will fail to placate by becoming businessmen. Driven by old fears and left-wing hates, we are moving to notions, à la Bertolt Brecht, that all wealth is suspect. If, as I suspect, the economy is a psychodrama, anti-market hysteria is unlikely to restore equilibrium. Some day of reckoning is at hand—a reckoning in trillions.