Adam Sandler should play villains in Bond movies; in a duet with Justin Bieber, Miley Cyrus looks like a jaded hooker 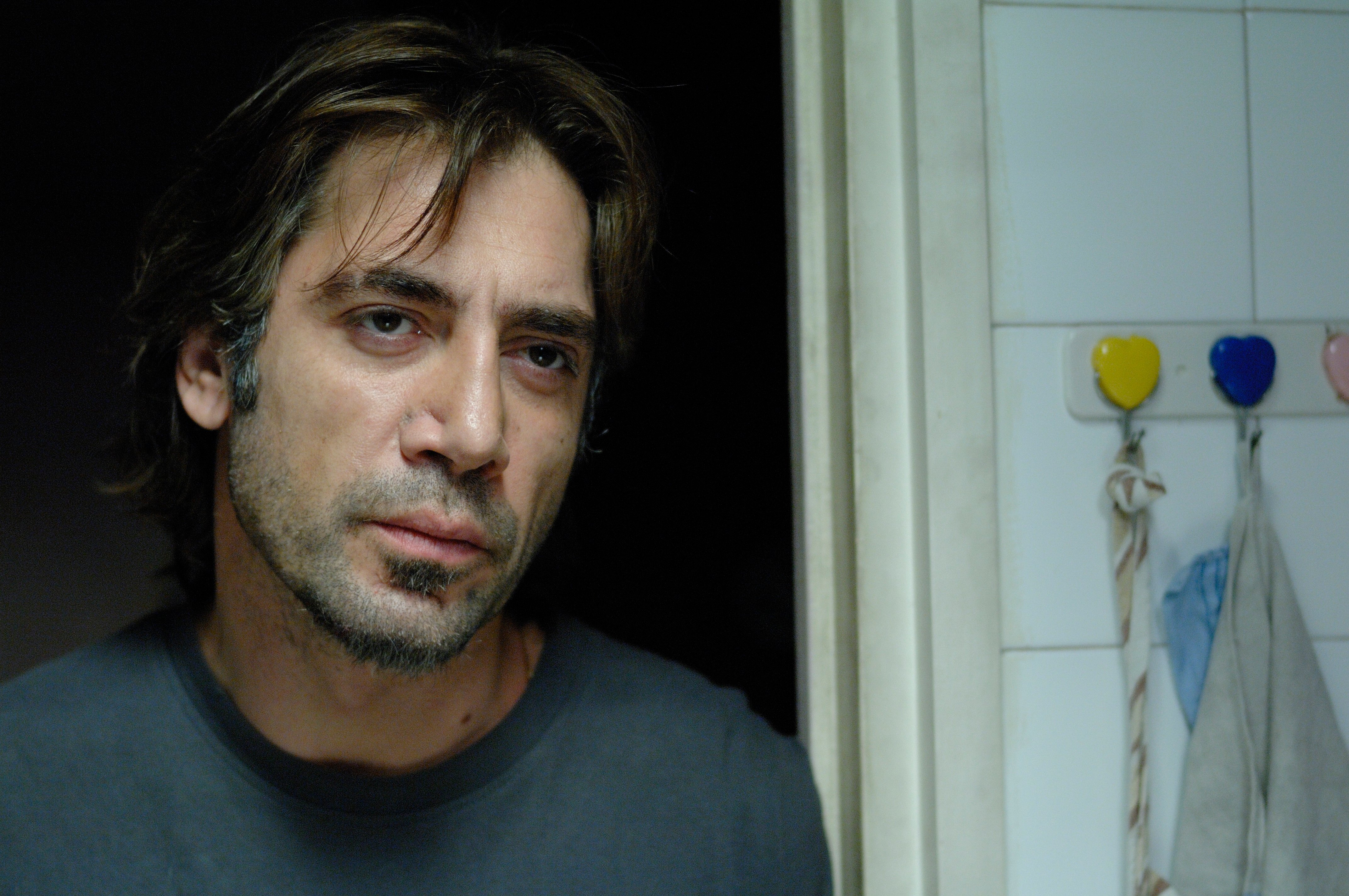 Boys will be boys. And what a crazy bunch are on offer this weekend. Adam Sandler, Hollywood’s perennial middle-aged child, takes his singular mix of narcissism and self-loathing to new heights in Just Go With It, a formula romcom composed of funny gags, toxic stereotypes and an unearned romance, with Sandler cast as a skirt-chasing plastic surgeon who persuades his assistant (Jennifer Aniston) and her two kids to masquerade as his fake family. Justin Bieber: Never Say Never documents the amazing phenomenon of Canadian teen heartthrob Justin Bieber, a savvy innocent who—at 16—seems positively mature in matters of the heart compared to Sandler. And a gormless Tatum Channing stars as a Roman soldier in The Eagle, a richly crafted Roman epic with a dumb-ass script that glorifies Rome’s imperialists as the good guys and portrays the aboriginal Britons as dirty savages.

But if you live in Toronto or Ottawa, the hot ticket is Biutiful, which begins its Canadian roll-out in those two cities this weekend. If you’re looking for subtlety, you won’t find it the films of Mexican filmmaker director Alejandro González Iñárritu (21 Grams, Babel). And his latest is no exception. But you won’t find a more powerful performance by an actor this year than the one given by Javier Bardem, who won Best Actor in Cannes and an Oscar nomination for his bravura turn in Biutiful. On the page, the narrative might seem over-ripe, but the cinematography, editing and acting are so breathtaking, this visceral melodrama comes across as pure verité. Bardem stars as a former drug dealer in Barcelona who brokers black-market jobs for illegal Asian immigrants while struggling to contain his bi-polar prostitute girlfriend and come to terms with his own terminal illness. He’s also a clairvoyant who talks to dead people. As usual, Iñárritu overloads the plot and the pathos, which may aggravate the sensibilities of more refined cinephiles, but Bardem’s emotional depth and the raw frisson of the filmmaking make Biutiful a must-see. And for Quebec’s Denis Villeneuve, director of the Oscar-nominated Incendies, this heavyweight contender is the one to beat in the Best Foreign Language Film category. For a more detailed look at Javier Bardem, go to my recent piece in the magazine: The Incredible Hunk.  Now for the wide-release fare . . .

Just go With It 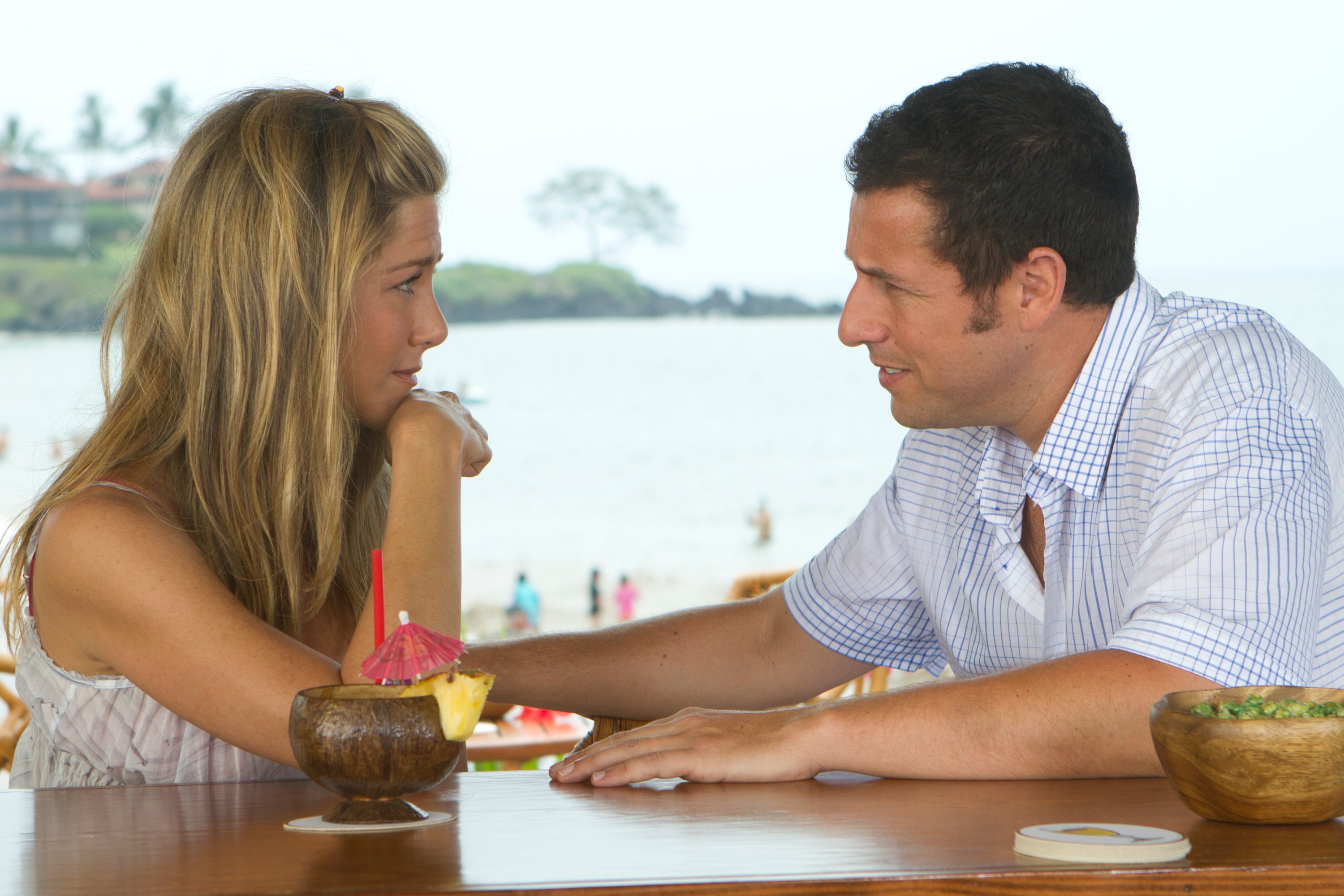 Jennifer Aniston and Adam Sandler in ‘Just Go With It’

Ever since Judd Apatow cast Adam Sandler as a selfish, mean-spirited comedy star in Funny People—a nervy performance that came across as a devastating self-portrait—it seems there’s no going back. (Like seeing Jerry Lewis more-or-less playing himself in The King of Comedy.) I now find it impossible to buy Sandler as a lovable jerk. In Just Go With It, he’s just a jerk.

Sandler stars as Danny, an obscenely successful plastic surgeon who is single, but discovers that wearing a wedding ring helps him bed young women for meaningless flings. When Danny actually falls for one of his conquests, a 23-year-old babe named Palmer—played by Sports Illustrated swimsuit-issue cover girl Brooklyn Decker—he has to spin an elaborate web of lies about the fake wife he’s on the verge of divorcing. Danny then persuades his long-suffering assistant, Katherine (Jennifer Aniston) to pretend to be his wife. Pretty soon Danny is cutting pricey deals with Katherine’s two kids to pretend to be his children, and the whole gang ends up taking a vacation in Hawaii with his fake ex-wife’s fake new boyfriend (Nicholas Swardson). There, Katherine meets up with her high school nemesis, played by a slumming Nicole Kidman, which requires yet another charade. And what is Nicole Kidman doing in an Adam Sandler movie? We’re just getting over seeing Natalie Portman play Ashton Kutcher’s playmate in No Strings Attached (another romcom with a cliché for title).

Directed by Sandler’s longtime cohort, Dennis Dugan, Just Go With It is actually a loose remake/desecration of Cactus Flower, which won an Oscar for Goldie Hawn. The shenanigans produce a few laughs. But this cynical farce is a rummage sale of gross stereotypes, from gay sailors to a negligent Hispanic nanny. It’s also a transparent vanity project for Aniston, who struts her gym-toned bod in a bikini competition with this SI Swimsuit model who’s half her age. The whole post-Brad campaign to prove Aniston’s hotness is getting very tired.

Adam Sandler should just give up making romantic comedies, even though they make scads of money. He should start making an honest living—playing villains in Bond movies. He could stroke a white Persian cat, do squeaky voices and give full reign to his evil inner child.Justin Bieber: Never Say Never 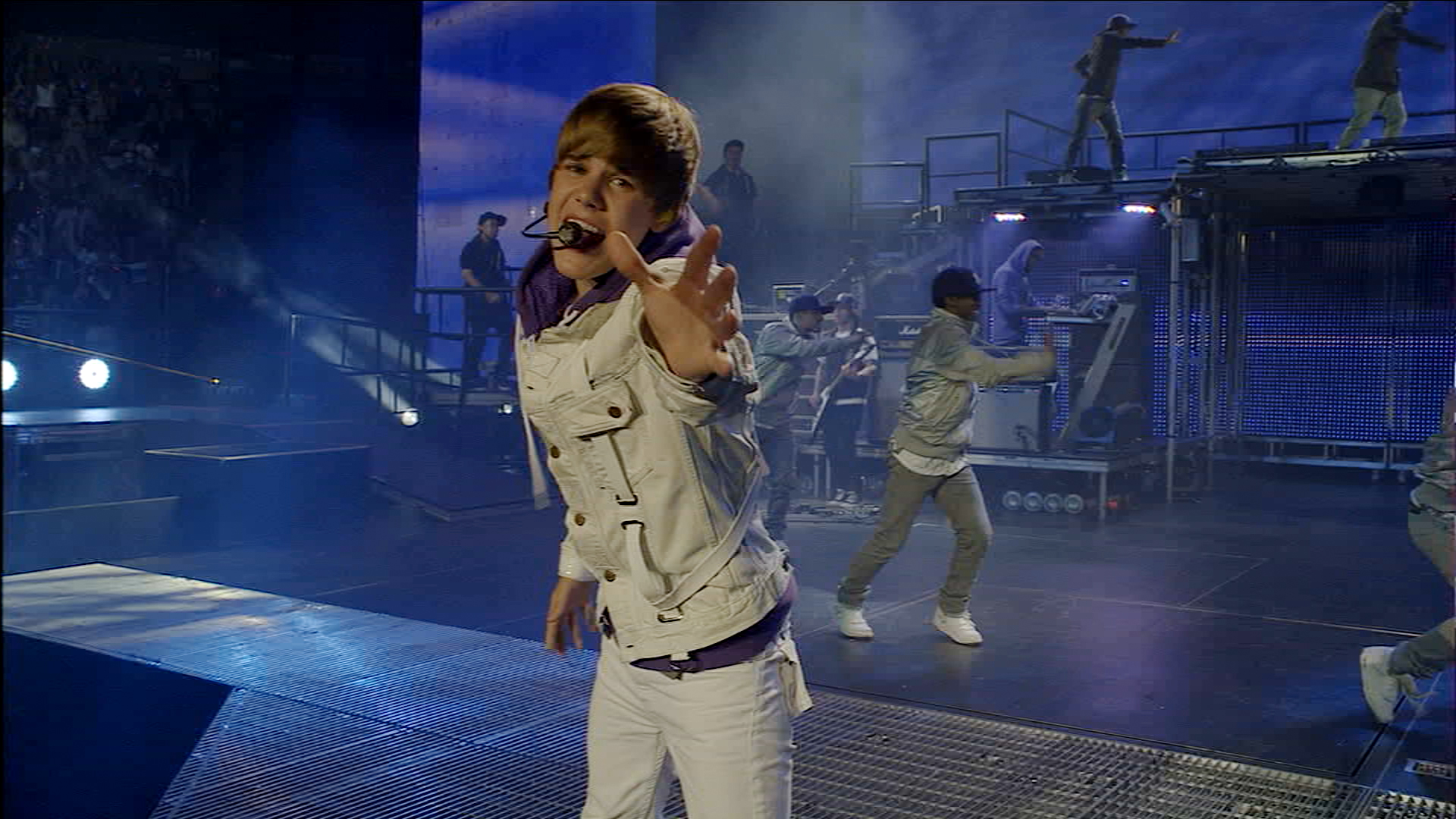 Seeing this “documentary” on Justin Bieber was, in all honesty, one of the weirdest screening experiences in my all-too-long career of watching movies for a living. There was a quiet little press screening a couple of weeks ago that the studio neglected to invite me to. So I ended up going to the movie’s Toronto ‘premiere.’ I was assigned a single reserved seat (tickets were scarce) in the dead centre of a cinema filled with several hundred screaming girls. The teenage girl next to me asked what Maclean’s was. I was going to explain to her what magazines did, but couldn’t hear myself speak. The crowd screamed for about 20 minutes before the movie started—for the benefit of a TV crew on hand to “interview” fans. They screamed at the opening corporate logos. And they screamed most of the way through the movie. They also waved glow sticks. The only thing I’ve seen remotely like it was the premiere of the first Twilight movie—which was a sewing bee compared to Bieber fever. Usually I don’t mind being deafened; hey, I play in a rock band. But a mass of screaming young girls produces a high-pitched frequency that could pierce sheet metal. So I watched the movie with pieces of my popcorn napkin plugging my ears.

And the movie? Let me quote the studio’s official synopsis: “Never Say Never is the inspiring true story and rare inside look at the rise of Justin from street performer in the small town of Stratford, Ontario to internet phenomenon to global super star culminating with a dream sold out show at the famed Madison Square Garden in 3-D.” That about sums it up. This well-crafted profile of instant superstar is pure gold for his fans, and a curious revelation for someone like me who’s only glimpsed Bieber through the prism of the media. Calling the film a documentary is dubious, because it’s really just a slick feature-length promotional video. The only real drama occurs when Justin’s vocal chords get damaged before the big Madison Square Garden performance. And any painful family history is skimmed over—the absent father makes just a fleeting cameo.

But because Bieber’s early years were so well archived—on home video and YouTube—the film does offer up a rich time-lapse bio. And Bieber himself is downright adorable. When he performs a duet with Miley Cyrus, next to him she looks like a jaded hooker going through the motions. And he’s not just cute. He’s a genuine talent: a seriously gifted singer who can also dance, play the hell out of drum kit, and serve the fan base with uncanny sincerity. Also, he has that priceless Canadian knack for self-deprecation. Guess I caught the Bieber fever after all. It’s impossible to see this film and not love the guy. He’s the real deal. 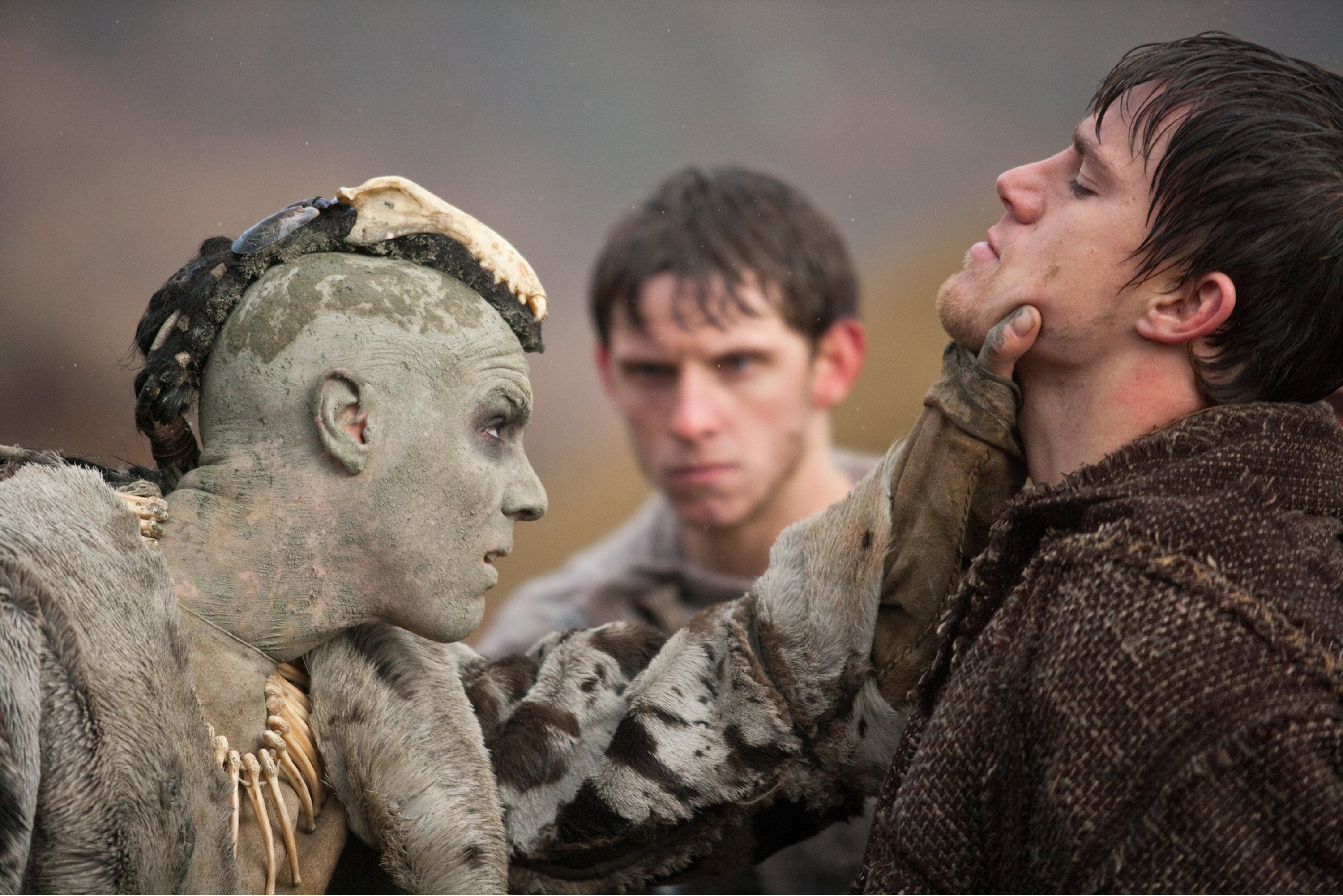 (from left) Tahar Rahim, Jamie Bell and Channing Tatum in ‘The Eagle’

Here is proof that great talents can make mediocre movies. Set in 2nd-century Britain and based on the Rosemary Sutcliff novel The Eagle of the Ninth (1954), this Roman epic boasts impeccable credentials. Its director is Kevin McDonald, who made Touching the Void, The Last King of Scotland and State of Play. It was written by Jeremy Brock, whose credits include Mrs. Brown and The Last King of Scotland.  Its rhapsodic landscapes were lensed by Oscar-winning cinematographer Donald Mantle (Slumdog Millionaire). And its cast features Donald Sutherland as a Roman patriarch, Jamie Bell (Billy Elliot) as a Celtic slave and Tahar Rahim (The Prophet) as a tribal warrior prince of the Seal People. Oh yes, then there’s the star of the show, Channing Tatum (Dear John)—a former Florida fashion model with a heroic mug and a limited range of expression. He has the role that would have been played Charlton Heston in the ’50s, the decade in which the film’s vision seem to be frozen.

Tatum plays Marcus Aquila, a Roman commander struggling to redeem his father’s tarnished reputation. Twenty years earlier, his father had led the 5,000-strong Ninth Legion into battle, and they vanished without a trace, along with their cherished emblem, the golden Eagle. Marcus takes control of a small Roman fort in northern Britain, defends it from a siege and acquires a loyal slave (Bell), whose life he saves from an unfair gladatorial contest. Defying sensible advice, with slave in hand, Marcus then embarks on a quest to recover the Eagle, and his father’s honour. He leads his soldiers across Hadrian’s Wall into what is now Scotland, beyond what Romans thought was the end of the universe. What ensues is a Heart of Darkness journey into aboriginal darkness, a world where painted savages populate a hostile hinterland

The landscapes and the battle scenes generate some satisfying spectacle. But the promising intrigue of the story fizzles. And the film’s imperial vision, etched with a mish-mash of American and British accents, is so retrograde it’s mystifying. Here’s how the screenwriter explains it: “We drew an analogy between Roman imperialism and the supremacy of the American military in the world today. It affords us a clear and concise paradigm which the audience will grasp; the clash of cultures is clearly projected in the difference of accents.”

Uh huh. So if that’s the case, with its hearty embrace of triumphant Romans murdering indigenous people, the film would appear to champion American military aggression. What’s up with that?