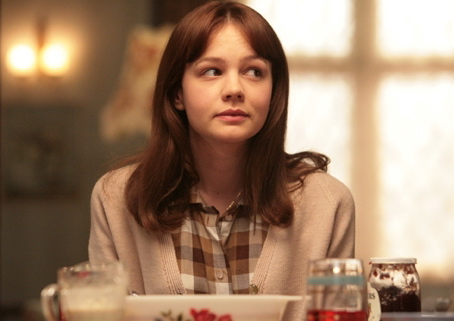 The Oscar race, like Christmas, starts way too early. But if there’s one clear contender who has emerged as an early favorite among those who handicap awards, it’s Carey Mulligan, the 24-year-old British actress who stars in An Education. This is Mulligan’s first lead role, and her chief rival at the Academy Awards will likely be Gabourey Sidibey, the 26-year-old African American who makes her screen debut as an abused daughter in Precious. That makes two women playing susceptible teens in the clutches of predatory men. But An Education is by far the easier film to watch. The giddy rite of passage that Mulligan’s character experiences in the arms of an older man is a relatively harmless joyride, especially next to the horrors that Sidibey’s heroine survives in Precious. Here’s an expanded version of what I wrote about An Education when it premiered last month at the Toronto International Film Festival.

In a star-making performance, Carey Mulligan is adorable as Jenny, a smart 16-year-old from a London suburb who has her sights set on Oxford when she’s led astray by a debonair but dodgy suitor.  And Peter Sarsgaard is more likeable than he has any right to be as David (Peter Sarsgaard)—a silver-tongued gent who tempts Jenny with a much racier education than anything she could find in university. Written by Nick Hornby (High Fidelity) and directed by Lone Scherfig, the story is set in 1961, in post-war, pre-Beatles England. And as its impressionable heroine is seduced by art, jazz, nightclubs and everything French, the film captures a world on the cusp of a cultural revolution.

An Education not only captures the period, it conjures the energy of Brit films from the era. Although she’s younger, and just on the verge of the Swinging Sixties, Mulligan’s ingénue recalls a certain generation of English actresses—Lynn Redgrave, Julie Christie, Rita Tushingham—who brought a vivacious spark to films like Georgy Girl, Darling and The Knack. In this Pygmalion tale, Mulligan also has a glimmer of the young Audrey Hepburn—even if her beauty is more plain than Hepburn’s, she has a similar spark of vivacious innocence.

Sarsgaard, meanwhile, finesses his role as her smooth seducer with a breezy charm that makes him a lot less creepy that he should be. I mean, here’s a smarmy pseudo-intellectual who literally picks up this teenage girl on street by coaxing her into his car. His most cunning act of seduction, however, involves a devious strategy for disarming her parents, especially her blinkered, class-conscious father (Alfred Molina), who becomes convinced that David’s courtship of her daughter will offer a fast track to bourgeois respectability.

Strangely, even though the suitor’s subterfuge, and her dad’s gullibility, make us wince, we find ourselves rooting for this inappropriate romance—even though it’s obvious from the start that it will end badly. If Jenny did the sensible thing, and followed the advice of her compassionate headmistress (Emma Thompson), she would have a dull, safe life and there would be no movie. No matter how naïve, Jenny seems protected by her own intelligence, and we sense she will emerge bruised but undamaged, made stronger and wiser by the kind of extra-curricular education only reckless misadventure can provide.