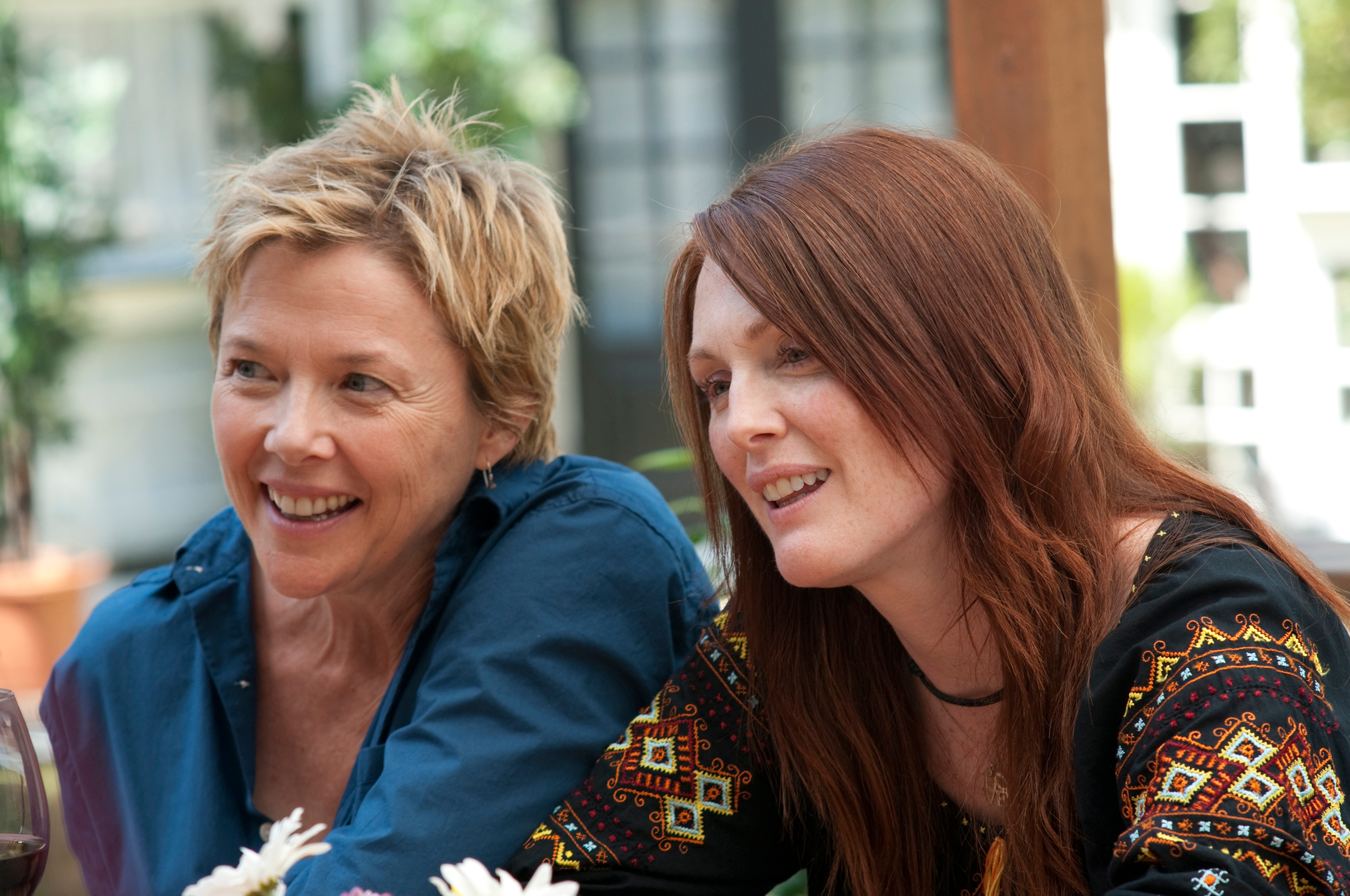 For a summer weekend, there’s an unusually eclectic range of movies opening. At one end of the spectrum is an action blockbuster, Predators, starring Adrien Brody as a mercenary being hunted on an alien planet. (First Splice, now this; Brody seems to be on a sci-fi kick.) I was unable to screen Predators, but for those who prefer to watch predatory humans on our home planet, here are four tempting alternatives that I have seen, all featuring strong female roles—The Kids Are All Right, Wild Grass, The Girl Who Played With Fire, and Act of Dishonour. Of the bunch,  I’d highly recommend two of them: The Kids Are All Right stars Julianne Moore and Annette Bening as lesbian parents whose children track down their sperm-donor dad,  and it’s a total treat, the kind of juicy character comedy that we expected from Woody Allen in the previous century.  Wild Grass, a delightfully off-kilter romantic comedy from elderly French auteur Alain Resnais, is a gem of pure whimsy.  Finally, there’s Act of Dishonour, a bold feature debut from Afghan-Canadian Nelofer Pazira, which has much to recommend it despite some flaws. The Girl Who Played With Fire, I’m sad to say, is a disappointment, and of interest only to fans of Swedish author Stieg Larsson’s blockbuster Millenium trilogy. I’m one of them. But even then, this second film adaptation in the Swedish language series is a pedestrian piece of work, a plodding thriller that’s not half as brutal, or as good, as The Girl With the Dragon Tattoo—despite the persistent brilliance of Noomi Rapace, who’s mesmerizing ever moment she’s on camera. For a video that I shot of Rapace in Cannes, go to: Noomi Rapace, Dragon Girl.  Meanwhile, my capsule reviews of the four films . . .

The Kids Are All Right

What a feast of acting! Annette Bening and Julianne Moore, who have seven Oscar nominations between them, cook up a marital storm as Nic and Jules, a suburban couple in Southern California with two teenaged children, Joni and Laser (Mia Wasikowska and Josh Hutcherson). Joni, the older of the two kids, tracks down their biological father, who turns out to be restaurant-owning, motorbike-riding, organic-gardening, skirt-chasing bachelor named Paul (Mark Ruffalo). Paul is tickled to have found himself a family to play with, but this affable interloper drives a wedge between Nic and Jules, whose marriage is already under strain.  Moore’s character is a flakey free-spirit who’s trying to launch a career in landscape gardening, handy for Paul, who has a garden (and more besides) that needs cultivating. Bening’s character is the  breadwinner, a hard-working physician who medicates her anxiety each night with a heavy heavy hand on the red wine. The movie unfolds like one deliciously awkward dinner party, ripe with innuendo, intrigue and sexual desperation.

It’s great to see Bening in such splendid form, as an actress who’s not trying to look like a movie star—she bitchy and butchy, defiantly looking her age and showing no sign of a face lift. Bening been scarce on screen even since she domesticated Warren Beatty, and her performance here has the volcanic quality of a talent let out of its cage, which dovetails nicely with her ferocious character, as a spouse whose patience is wearing thin, and who steps closer to the edge with each quickly refilled glass of Cabernet. Moore has a ball with her role as the impulsive, middle-aged flower child. And Ruffalo’s  loosey-goosey charm strikes just the right puppy-dog balance between adorable and slippery; we spend much of the movie trying to figure out if he can be trusted. Then their are the kids, who do more than hold their own: Joni, who’s named after Joni Mitchell and played by Mia Wasikowska (Alice in Wonderland) is the family’s most shrewd and mature mature member, and Laser (Josh Hutcherson), who is hungry for a father figure and whose sexuality is in question. Adding a novel twist to this already untraditional family is that the kids are half-siblings, because Nic and Jules took turns getting pregnant from the same sperm-donor dad.

The Kids Are All Right was co-written and directed by American filmmaker Lisa Cholodenko (Laurel Canyon, High Art), who brings a sharp observational wit to each of her characters. Despite the high-concept, trailer-made premise—hey, here’s a menage we haven’t seen before!—she avoids schematic shortcuts and, with her impeccable cast, creates an ensemble of fully fleshed-out characters who resist facile judgments. This is the kind of movie that  had me wishing, moments after I’d left the theatre, that there were more movies like it—sly, sexy grown-up dramas driven by characters who are as fallible as they are likable, and who reveal themselves in dialogue that inevitably means more than it says.

These days, when every aging auteur seems obsessed with the Death of Cinema, it’s a kick to see a film by an old man that celebrates its life—Les Herbes Folles (Wild Grass), a gem by 87-year-old French master Alain Resnais, who’s most famous for Hiroshima Mon Amour. Adapted from a novel by Christian Gailly, it’s a quirky love story that’s fresh, audacious and unpredictable. And although the protagonist is an older man, it doesn’t feel like an old man’s film. The story concerns a stolen and discarded wallet, which allows for a chance connection between the woman who loses it and the man who finds it. After much back and forth, George (André Dussollier) contacts Marguerite (Sabine Azéma) to return the wallet—irrationally expecting romance to ensue. He’s married to a perfectly lovely wife, but the fantasy, fuelled by an absurd sense of entitlement, takes on a life of its own as he begins stalking Maguerite, which is more droll than creepy. With a vibrant colour scheme inspired by graphic novels, a silky jazz score, and a slip-sliding narrative that takes inspired turns, Wild Grass seems both reckless and immaculately controlled. It arrives as a tonic, and makes French cinema seem young again—remarkable, considering that it comes from an octogenarian auteur.
Act of Dishonour 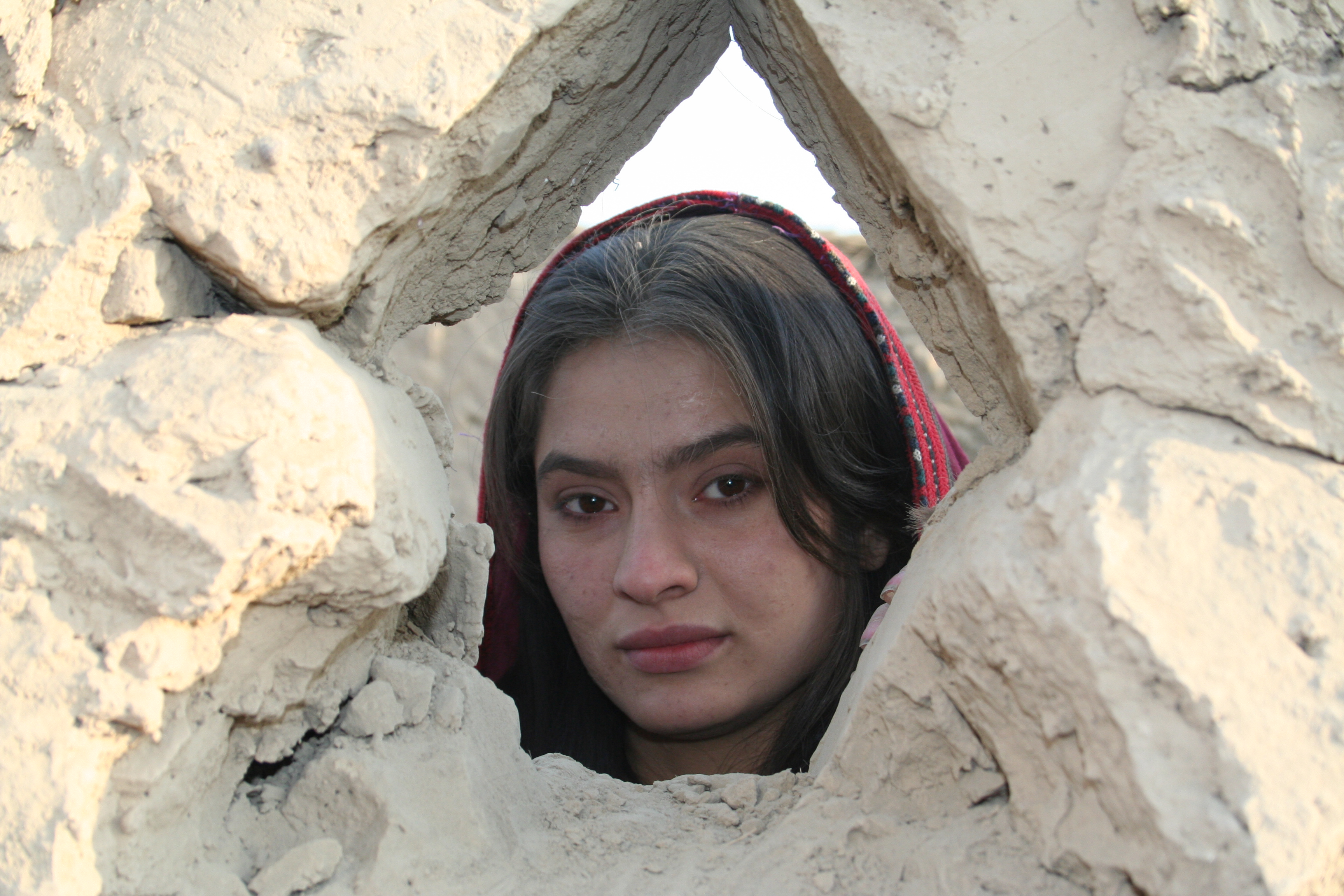 Marina Goldahari in 'Act of Dishonour'

Nelofer Pazira first stepped into the spotlight when she ended up starring in Kandahar, a 2001 film by Iranian director Mohsen Makhmalbaf, while retracing her roots in Afghanistan. This Afghan Canadian has since gone on to write a book, A Bed of Red Flowers: In Search of My Afghanistan, and make a feature documentary, Return to Kandahar (2003). The influence of Makhmalbaf in particular, and of Iranian cinema in general, is clearly evident in Pazira’s dramatic feature debut, Act of Dishonour. Like Kandahar, it involves a film-within-a-film—Pazira portrays a member of a Canadian film crew that’s struggling to shoot a movie in rural Afghanistan. As the crew tries to recruit local talent, they incite suspicion and hostility among the villagers, who feel they’re a corrupting influence. The core of the drama concerns a beautiful young bride-to-be, Mena (Marina Goldahari), a 15-year-old whose engagement to a handsome young lad is complicated when she is befriended by Mejgan (Pazira). The bride wants a burka for her wedding, and the film crew has a whole rack of them, but that means she would have to take a taboo trip out of her walled home. The plot hinges on a paradox—to get her hands on a radiant symbol of her enslavement, Mena has to make a deal with the Western devil, and risk committing a mortal sin in the eyes of the elders. Why she would take this risk is a plot point that’s never adequately explained. And Act of Dishonour‘s slender narrative is frayed by an  element of villainous caricature—the film crew’s Canadian director, who has contempt for local customs and is constantly fretting about “losing the day.” But the appeal of the picture lies in its elegant marriage of tragic fable and documentary realism, genres that are fused in the visuals so vivid and spare they seem intrinsically symbolic. The drama unfolds as play of haunting faces and brilliant fabrics, etched against a bare canvas of dun-coloured desert and mud walls. The walls, with their triangular peep holes,  are like architectural burkas for the women who don’t dare venture beyond them.  The landscapes beyond, rendered in poetic tableaus, are breathtaking. And while Pazira’s fiction is not entirely convincing, the rich beauty and stark reality of the world she portrays is undeniable.

The Girl Who Played With Fire 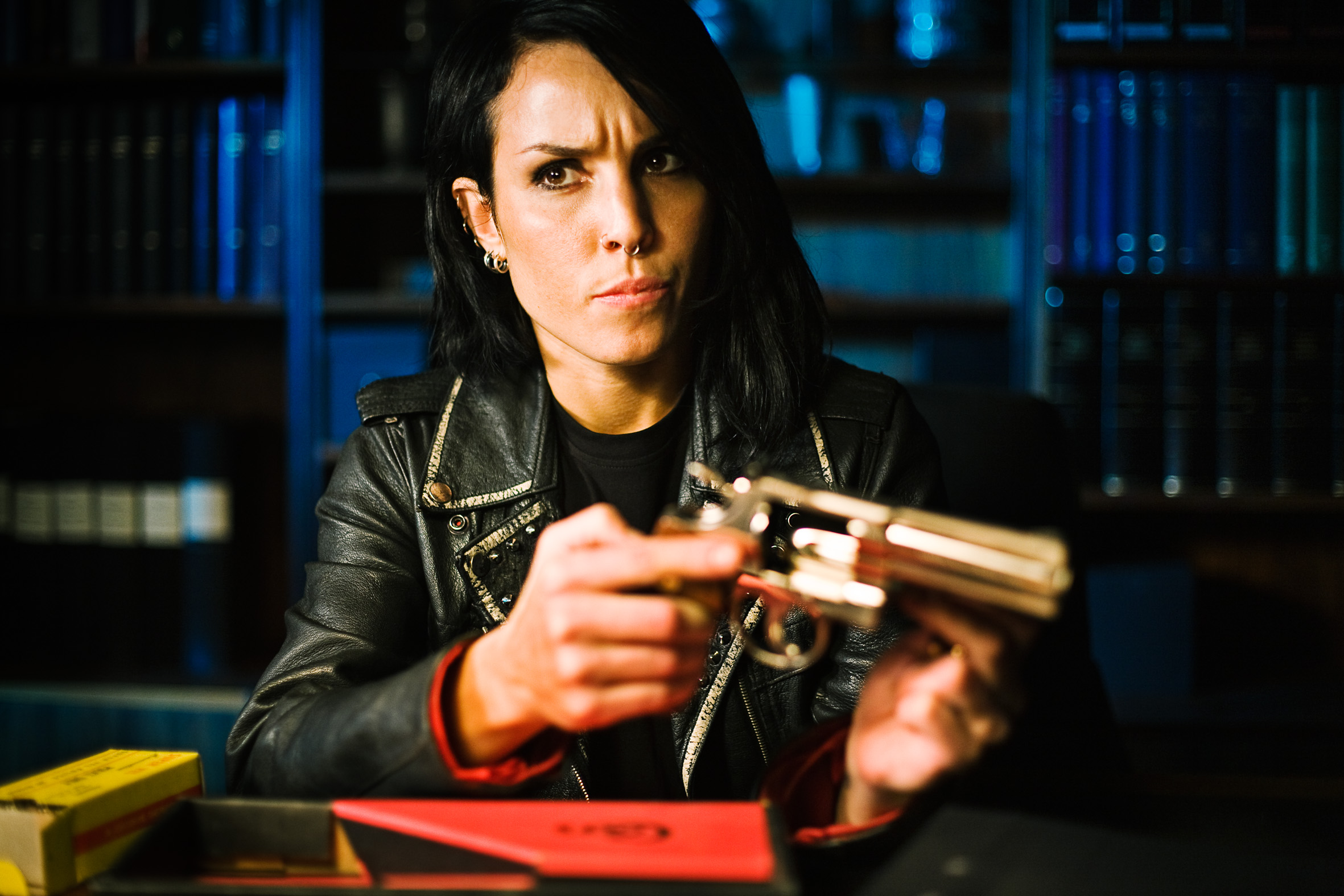 Noomi Rapace in 'The Girl Who Played With Fire'

The cast remains the same, with Noomi Rapace growing out her punk coif to play Lisbeth Salander as a framed fugitive, and Michael Nyqvist reprising his role as the phlegmatic journalist Mikael Blomkvist. And their performances are solid. But with TV director Alfred Danielson behind the camera (He also directed the third installment, (The Girl Who Kicked the Hornet’s Nest), the film lacks the intensity, the wit and the style of the The Girl With the Dragon Tattoo, which was directed by Niels Arden Oplev. It unfolds as a by-the-numbers procedural. The script dispenses with much of the early part of Steig Larsson’s novel, the wry scenes that dwell on Salander’s makeover as an affluent fugitive, and her attempt to humanize her life with an opulent lifestyle.  And while Salander’s character virtually takes over the second novel, the film never seems to get inside her head. Danielson’s adaptation also lacks the horrific brutality of the first film, and that speaks to its more conventional nature. Without the book’s intriguing detours into Salander’s character, the movie doggedly follows the broad strokes of the plot. For anyone who has read the book, it serves as a familiar rendering, an illustration. But it doesn’t really bring it to life. As a movie, it seems shapeless. I do find it amusing, however, that Swedes are shown to buckle their seat belts before setting off on dangerous car chases. Those Volvo values run deep.

FILED UNDER: Alain Renais Annette Bening Julianne Moore Steig Larsson The Girl Who Played With Fire The Kids Are All Right wild grass