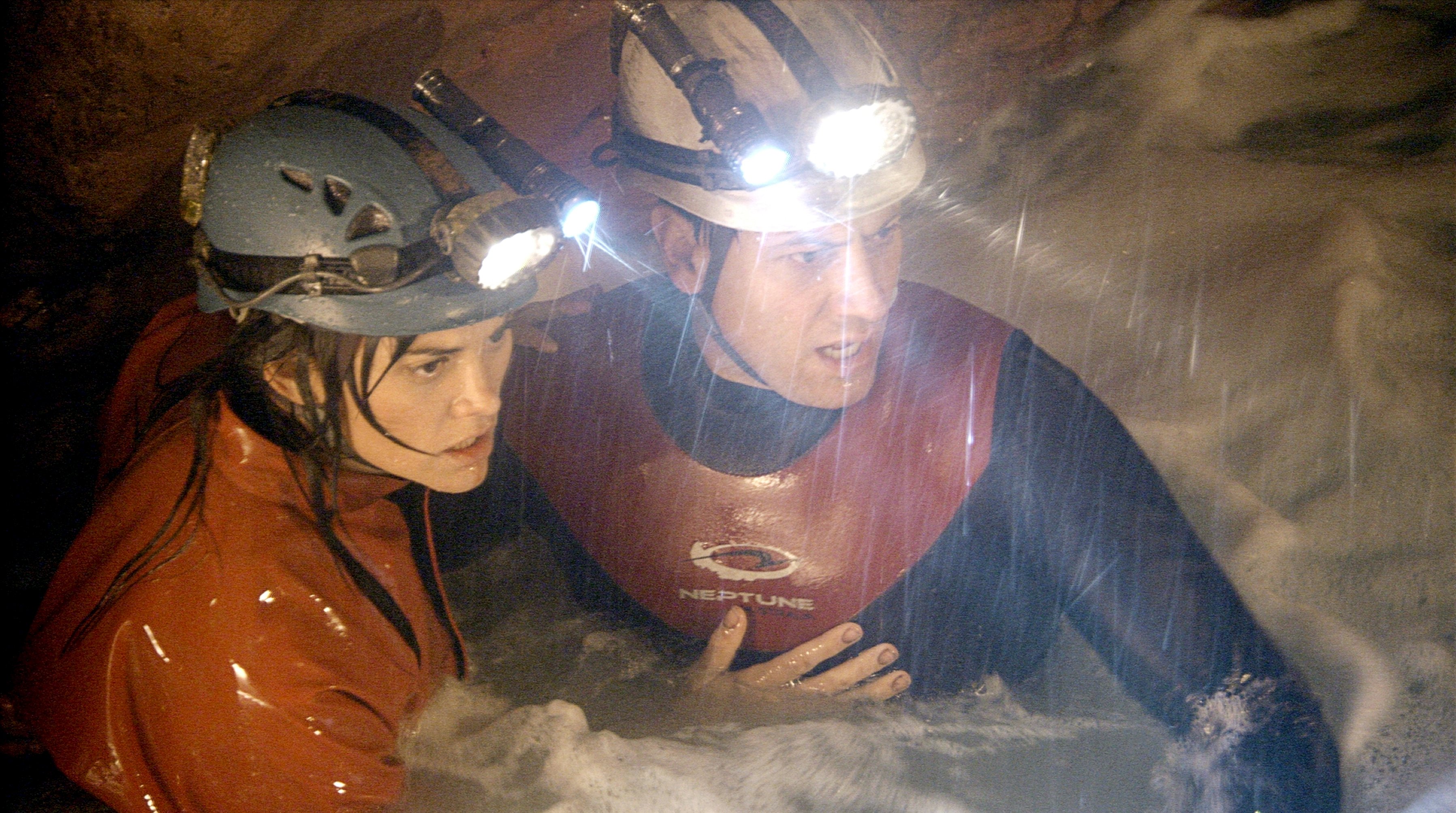 This weekend I’m looking at a couple of movies—one big, one small—that are essentially about claustrophobia: Sanctum, a 3-D IMAX thriller about cave divers who get in over their heads; and Oliver Sherman, a Canadian-made, small-town Gothic drama about a couple who get stuck with a creepy house guest. Sanctum is a cheesy, overblown, badly-scripted melodrama with some good action sequences. Oliver Sherman is a spare, tense character drama that’s well acted and artfully shot, though endowed with a narrative that makes such a virtue of restraint it feels a bit thin. You might say one movie has too much story, the other two little.

Sanctum
The past year has seen a wave of trapped-in-a-hole thrillers. Aside from the real-life saga of the Chilean miners, we’ve seen Ryan Reynolds stuck in a coffin in Buried, and James Franco pinned by a boulder at the bottom of a canyon in 127 Hours. And perhaps the only thing scarier than being trapped underground is being trapped underwater underground—which is the situation faced by the cave divers in Sanctum. Cave divers, in case you didn’t know, are scuba divers who like to swim through underwater caverns and wriggle through tight openings like moray eels. I’m a sucker for movies that require actors to wear wet suits and use sign language while their eyes bulge out in panic from behind a mask. I’m old enough to have been raised on Sea Hunt, the old black-and-white TV series starring Lloyd Bridges (father of Jeff). And what I like about seeing actors work underwater is they can’t fake it. They have to know how to swim, breathe through a tube, and clear their mask. Diving dramas have come a long way from Sea Hunt, and the underwater action sequences in Sanctum are impressive. The drama, not so much. The biggest star associated with Sanctum is James Cameron, the world’s leading pioneer of both 3-D and underwater movie-making. And given the prominence of his name in the promo, you’d think he directed it. But Cameron simply gave the movie his blessing as executive-producer and provided the 3-D camera gear that he developed for Avatar.

Sanctum was written and produced by Andrew Wight, who has worked with Cameron on 3-D documentaries for the past decade, including Aliens of the Deep and Ghosts of the Abyss. And it was directed by Australia’s Alister Grierson, who made a small but successful World War II combat picture called Kodoka, set in New Guinea. That’s also the setting for Sanctum, which is loosely based on Wight’s own cave-diving experience, in 1988, of being trapped in an cavern after a freak storm caused the entrance to collapse. That’s what happens to the characters in this movie, who are exploring the world’s largest  cave system when a tropical storm triggers a flash flood that seals the entrance, leaving them no choice but to find their way out to the sea through a labyrinth of underwater caves.You’d think that would be story enough. But the filmmakers have added a rickety superstructure of a plot. There’s a bitter conflict between a 17-year-old Josh (Rhys Wakefield) and his spartan father, Frank (Richard Roxburgh), who we are told, via the clunky dialogue, is “the most respected explorer of our time—he’s like Columbus.” There’s also a stock villain, a tycoon adventurer named Carl, portrayed by Ioan Gruffudd (Fantastic Four) in B-movie showpiece of bad acting.

Some of the underwater action sequences are genuinely gripping. But the 3-D seems less than state-of-the-art. In some scenes it’s downright diorama-like, with layered planes of action, which is surprising given that it bears the James Cameron pedigree. But worst of all, when the actors take off their diving masks and start to talk, the drama is strictly 1-D. 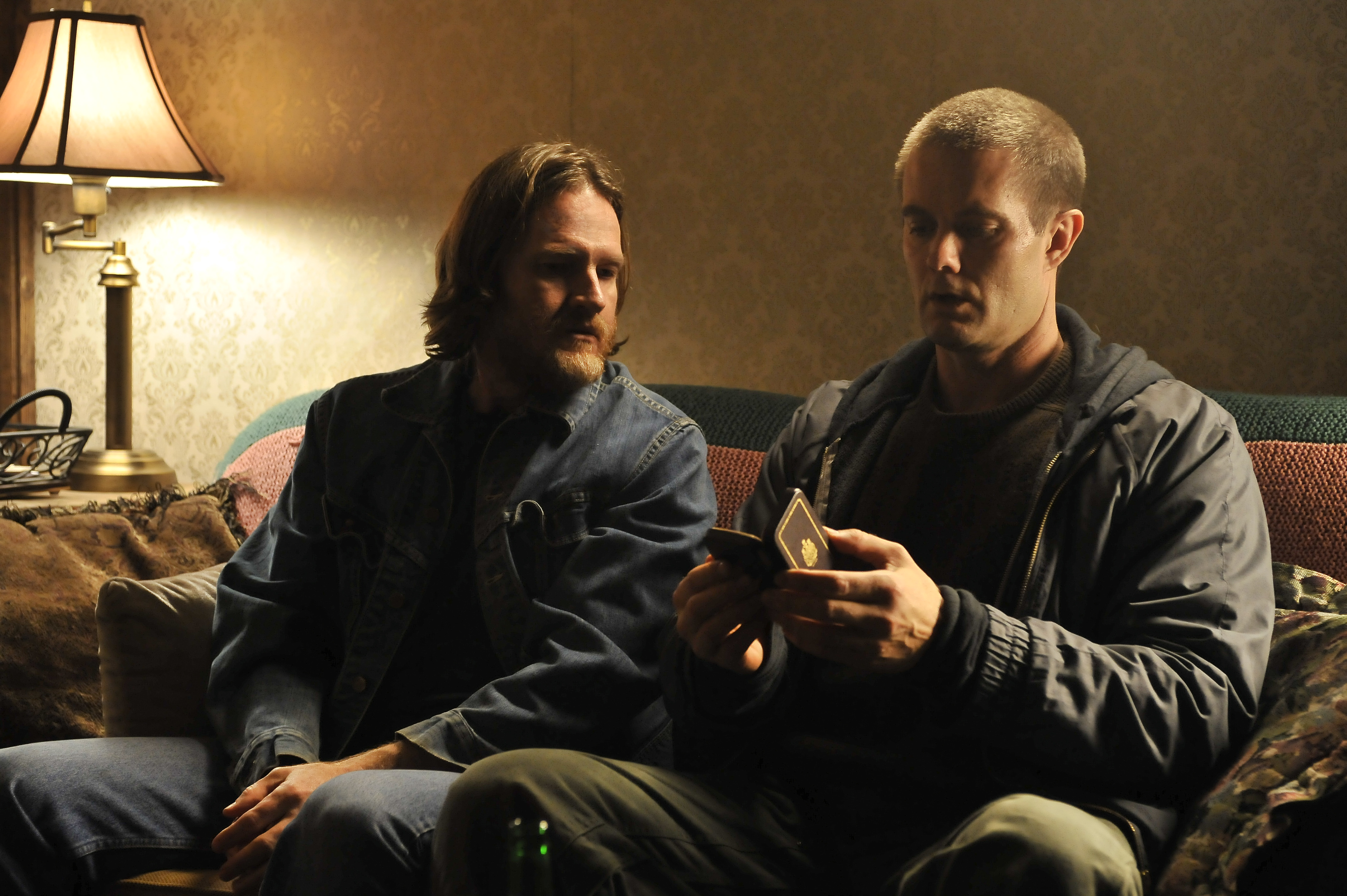 Based on the short story Veterans by Rachel Ingalls, this deft feature debut by Canadian writer-director Ryan Redford is the simple tale of a peaceful family being threatened by a scary and unknowable outsider. Its chief pleasures like in the fine-tuned performances of its three principals—American actor Garret Dillahunt (Deadwood, The Road ) and two Canadians, Dillahunt’s Deadwood co-star Molly Parker and Donal Logue (The Tao of Steve, Zodiac). It may seem fitting that an American is cast as the menacing stranger, while the two Canadians play the placid couple whose life he invades, but the story is set in a rural-gothic limbo, without the nationality of the characters or the setting ever being identified.

Sherman (Dillahunt) and Franklin (Logue) are both veterans of an unnamed war. Franklin saved Sherman’s life and received a medal for his efforts; Sherman has a long scar down the back of his skull, and a head injury that seems to have left a permanent mark on his behaviour. One day, out of the blue, Sherman shows up at Franklin’s door, stays for dinner, stays the night, and soon becomes a disturbing fixture. He spends his days at the town library reading books about war, and spends his nights in the bar with Franklin, raking over the past. Franklin has a job, a devoted wife (Parker) and two young kids; Sherman is a drifter with no loved ones, no future and a simmering jealousy of his friend’s normal life. Sherman still carries his army bayonet, and there’s a certainty that it—like the proverbial gun introduced in a play—will eventually be used. But perhaps not quite as we expect.

Parker is especially effective as Irene, Franklin’s wife, whose warmth is gradually frayed by fear. And Redford builds the tension with minimalist dialogue and thick silences. He’s a fan of Terrence Malick, and the influence shows in the stark compositions by Spanish cinematographer Antonio Calvache (Little Children). Composer Benoît Charest (Polytechnique) complete the austere mood. It’s becoming more common to see Canadians films that harness international talent and don’t feel the need to advertise their Canadian identity. The same can be said of Daydream Nation. Yet in both cases the setting still seems oddly authentic, not generic. In the end, what’s maybe most indelibly Canadian about Oliver Sherman is its shy introversion—and I’m not talking about the characters, but the narrative itself. The result is a kind of anti-melodrama, a movie that’s esthetically rich yet not entirely satisfying.