PANAMA CITY — The exceptionally happy gang in the photo above are surfers from Santa Catalina, a remote fisherman’s village on Panama’s Pacific coast. As the stars of Breaking the Wave, a documentary that premiered last week at the 3rd annual International Film Festival of Panama (IFF Panama), they were enjoying their Cinderella moment. These are world-class surfers, but as this socio-political surf movie from local director Annie Canavaggio makes poignantly clear, finding sponsorship is a lot tougher than finding the perfect wave, especially if you’re poor, Panamanian and black. For these athletes, who live a hand-to-mouth existence back home, being feted at a luxury hotel in the newly gentrified old quarter of Panama City was like landing on another planet.

Can a country find its identity through film? Even though Panamanian cinema barely exists, that was the most exciting question that emerged during the five days I spent as a guest of IFF Panama last week. This young, rapidly growing festival is international in scope, but its greatest impact has been to galvanize the imagination of a country that has only just shaken off centuries of colonial rule, and is now wrestling with issues of corruption, poverty—and cultural identity.

While the surfers played poster boys for Panamanian pride, the festival’s hometown hero was Abner Benaim, who roused local audiences with Invasión, an eye-opening  documentary about the U.S. military siege of the capital that ousted dictator Manuel Noriega in 1989 while wreaking untold collateral damage. By turns sardonic and harrowing, Invasión’s wry mélange of oral history and re-enactment sets out to shatter the wilful amnesia of a country all too eager to bury its troubled past. Many of the younger generation are only vaguely aware of the invasion, which left anywhere from 500 to 2,000 civilians dead, depending on whom you talk to.

A Panama-born filmmaker who learned his craft in Israel, Benaim jump-started his country’s fledgling film industry in 2009 with Chance, a priceless satire about a pair of abused servants who stage a household coup in a mansion. It was the first homegrown movie to get a decent release in Panama for 60 years, and eclipsed Avatar at the box office. Benaim, 42, followed it up with a documentary feature called Maids and Bosses (2010), and with three movies under his belt—more than half those produced in his country since 1949—he is embraced as the de facto figurehead of Panamanian cinema. His Invasión won two prizes voted by festival audiences.

The festival, meanwhile, has emerged as the linchpin of Panama’s cultural reinvention. This year’s edition was lavishly endowed with $1.2 million in government funds, plus another $1.3 million from the private sector. And in tandem with the festival, the government has created a $3-million fund to support Panama’s film industry. “One of the issues a young country like this one has had is its sense of identity,” says festival director Pituke Ortega Heilbron (a Panamanian filmmaker who is married to the CEO of  COPA Airlines, a major festival sponsor). “We’re not known as a cultural epicentre,” she adds, “so people are really proud to have a first-class event happening here.”

What’s ironic is that the centrepiece of Panamanian pride was created by a Canadian, and has evolved within the Toronto International Film Festival’s sphere of influence. The IFF Panama was founded by Canadian expat Henk Van der Kolk, one of TIFF’s three founding fathers, who hatched the idea after retiring to Panama. The festival’s artistic director is TIFF’s current Latin American programmer, Dianna Sanchez. And TIFF’s artistic director, Cameron Bailey, breezed through the festival to host an industry event, before setting off to China on diplomatic mission to extend the TIFF brand.

Van der Kolk, however, has been squeezed out of the picture. Making a swift transition to self-rule, the IFF Panama board forced him to step down last year and turned control of the event over to Heilbron, his former co-director, after Van der Kolk was unwilling to share the directorship. Heilbron calls Van der Kolk “brilliant” and gives him full credit for creating IFF Panama. But the prospect of a gringo who does not speak Spanish acting as the voice of a  Panamanian film festival was a stretch, to say the least. And Van der Kolk’s relationship with the festival has become increasingly strained.

Now Heilbron runs the event with Sanchez, while the embittered Van der Kolk shows up at premieres and makes no secret of his discontent. Sipping a beer at the closing night gala, he told me that an “oligarchy” left him no choice but to sell his private ownership of the festival. “The whole thing was a very underhanded political kerfuffle,” he said, adding that he now expects to decamp from his adopted country. “It’s a banana republic,” he declared. “Everyone has this overweening ambition. They’ve got a chip on their shoulder.” Just then the debonair president of the festival’s board, Yasser Williams Arosemena, came up to extend a friendly greeting to the festival’s founder. Van der Kolk responded with a heated tirade, accusing him of not returning his emails. The unflappable Arosemena politely denied the charge, smiled and moved on.

It’s the kind of scene that would not be out of place in a Graham Greene novel. And even the most casual observer can’t help but notice that post-colonial Panama is etched with contradictions as stark as the famous canal that bisects it. The gap between rich and poor is graphically evident, especially in the newly gentrified Casco Veijo, the capital’s old city, where the festival is now based. Reminiscent of old Havana, the picturesque neighbourhood is a work-in-progress, a vibrant mix of upscale bistros, beautiful ruins and construction sites. Walking to a restaurant with a Michelin-starred Spanish chef, you pass open doors of slum housing. Pairs of armed police on almost every corner make tourists feel more than safe, though locals warn you not to stray too far afield. Canavaggio, the director of the surf movie, showed up at her premiere on crutches, having recently been shot in the leg by a stray bullet from a robbery. But that was in another part of town. 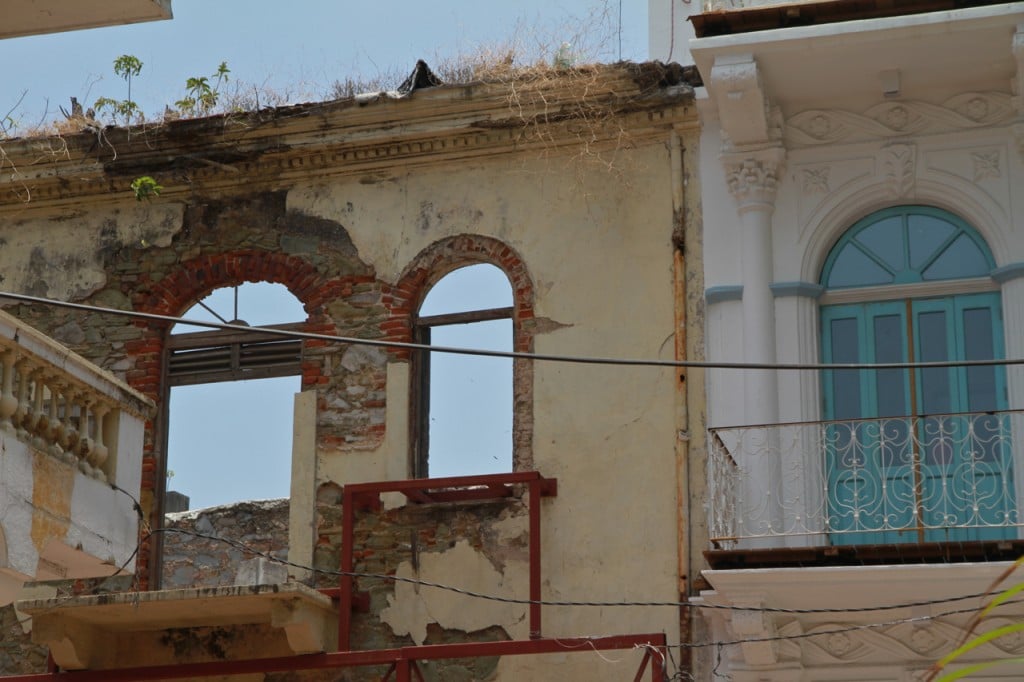 This year the festival moved its headquarters from the 70-storey Trump Ocean Club—a sail-shaped tower that cuts through the downtown’s bone-white skyline and ranks as the tallest building in Latin America. It found a home on a more human scale in the newly opened American Trade Hotel, an exquisitely restored five-storey edifice in the old city. Once a grand colonial office building, it had degenerated into a derelict squat occupied by drug gangs, including one that was notoriously known as an all-female outfit. Or so the legend goes.

The American Trade Hotel, a member of the luxury Ace chain, doesn’t trade on its unsavory past. But you could not design a better set for a film festival. This week in the elegant lobby restaurant, bathed in light from floor-to-ceiling windows, you could see French auteur Claire Denis lunching with Mexican master Arturo Ripstein, Spanish star Luis Tosar (Miami Vice) chatting with Argentine actor Ricardo Darín (The Secret in Their Eyes). And there was Abner Benaim and his Argentine girfriend/producer, Gema Juárez Allen, meeting with Panamanian distributors to land a wide release for Invasión.

Allen was also at the festival to present a kooky co-production called Midsummer Night’s Tango—a wry documentary about trio of tango musicians from Buenos Aires who travel to Finland to trace a wild claim by Finnish director Aki Kaurismäki that tango was invented near the Arctic Circle. Brimming with wit and sublime music, it’s the kind of gem one always hopes to discover at a festival. At a party after the screening, Chino Laborde, the singer from the movie, crooned tango ballads with his guitarist, making a cabaret out of a second-storey courtyard under a crescent moon, surrounded by women who knew the words.

Benaim’s documentary, despite its theme of historic slaughter, is streaked with its own touches of post-modern whimsy. Invasión, says the director, wasn’t just his attempt to investigate the horrors of the 1989 American blitz. Inspired by filmmakers like Errol Morris and Werner Herzog, Benaim has framed an almost anthropological portrait of his own culture. “I wanted to find out what it says about Panamanians that they try to cover up what happened,” he explains. “It’s part of Panamanian identity that we are happy-go-lucky people. Which is something positive. But that includes saying no to tragedy, death, conflict, sadness. Anything that makes you uncomfortable is best forgotten. That’s a lot different from what happens in Argentina or Colombia or Peru.”

Why? “Because of Panama’s geography,” he says, “it’s always been a place for merchants. As long as business is good, that’s what we safeguard. Tragedy doesn’t fit the agenda. Every ideology partners up with big business then is neutralized by that ongoing machine that is the Panama Canal, the railway, the free port. You don’t want to do anything that could shake that up.” Then he adds: “Officially we’ve been independent since 1903. The first time Panama was left alone as a grown-up was [in 1999] when the U.S. pulled out its military bases and gave back the canal. It’s now a teenager.”

Nothing embodies Panama’s history, or its future, as profoundly as the canal, which marks its 100th anniversary this year and is undergoing an expansion to accommodate the new breed of mega-ships. This epic waterway is both Panama’s triumph and its deepest colonial scar. Panamanians still talk about the apartheid overtones of the discrimination they felt in the U.S.-occupied Canal Zone, where locals would be tried under Louisiana law. Yet the canal, built by workers from the Caribbean and as far afield as Africa and India, has also embedded the country with a bracing ethnic diversity. Many of the immigrants came from Barbados. And for TIFF’s Cameron Bailey, who was Barbadian-born, visiting Panama had special resonance: his great, great uncle left Barbados to help construct the canal. “We never heard back from him,” says Bailey. “We don’t know if he died building it, as thousands did, or whether he survived and had a family.”

For Panama, the canal is a literal and symbolic crossroads—which is something every international film festival aspires to be. Benaim’s next film, meanwhile, is a segment of Historias del Canal, a dramatic feature woven from five shorts by five filmmakers about key moments in the canal’s history. The movie’s overall director? None other than Heilbron, director of the festival. It’s a small country, with a smaller film industry whose architects tend to wear more than one (Panama) hat. And this is a film festival with a populist mission. “We are a festival for the people,” says Heilbron, echoing a TIFF mantra that its prime mandate is to serve to audience, not the industry. Panama, in fact, is a nation of avid film-goers. Some 4.7 million movie tickets are sold annually, which is a lot for a population of just 3.7 million. But until recently, it was hard to see anything aside from commercial fare. The festival is trying to change that. This year it showed 70 films from 35 different countries, and to meet growing audience demand, it added new theatres with another 8,000 seats.

But for a country that can move the world’s shipping from one ocean to another, manoeuvring world cinema onto the screen can’t be so hard. When I visited the canal museum, I chatted with a young employee who raved about having seen films at the festival from Brazil and Italy. She was dying to see that documentary about the day America invaded her hometown.