Penny for your thoughts

The Association of Universities and Colleges of Canada will put out an updated report this autumn called “Momentum,” about all the progress Canadian university research is making. But this week, while I was chasing Maxime Bernier all over Southern Quebec, they put out a report showing that “momentum” might not be the best word to describe the total funding picture for Canadian universities. Two of my colleagues reported on the, er, report when it came out, and their stories captured the essential point: that total funding per university student in Canada is thousands of dollars less today than it was 20 years ago, thanks largely to rampant increases in enrolment. The result is a substantial gap between per-student funding in Canada and in the United States. It’s the next major challenge in our post-secondary education system and I’m going to spend a fair bit of time on the report’s findings, complete with fancy charts and graphs, after the jump.

First, the general situation: total funding per student in public four-year universities in the U.S. has grown fairly steadily, while it has stagnated after steep decline in Canada: 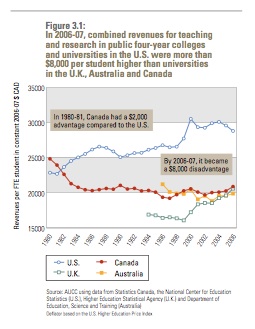 This means that in the U.S., the ratio of profs to students is roughly the same as it was 20 years ago. In Canada, and to some extent in the UK and to a dramatic extent in Australia, enrolment growth has far outstripped faculty growth: 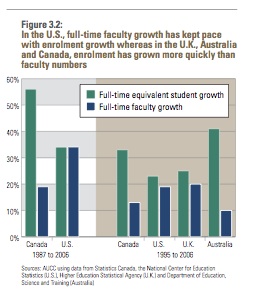 Now, it’s not as though governments have been ignoring universities. Thanks largely but not entirely to the Canada Foundation for Innovation, there’s been a capital revolution on campuses since federal deficits were elminated in the late 1990s: 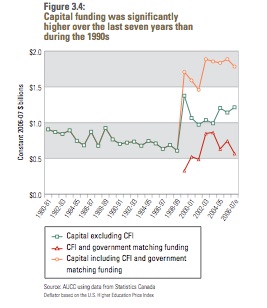 In all those shiny new buildings with shiny new labs, there’s a lot more research going on. Federal research funding has more than doubled since the late 1990s, although growth has started to flatten out. Provincial and private-sector funding has grown, though not quite as rapidly: 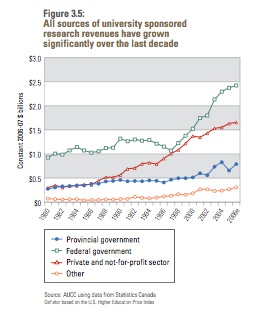 But here’s where the blessing starts to look a little like a burden. Massive new research capacity has become a draw on other university activities: the labs are so costly to run that other budgets — for teaching and other quality-of-student-experience matters — are squeezed: 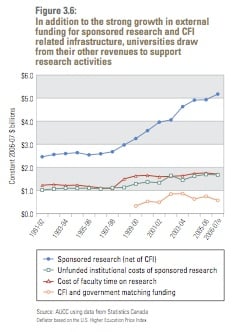 Which brings us to where we started. Partly due to the new (immensely valuable, but still budget-hungry) research capability on campuses, and partly due to exploding enrolment, funding per student is declining: 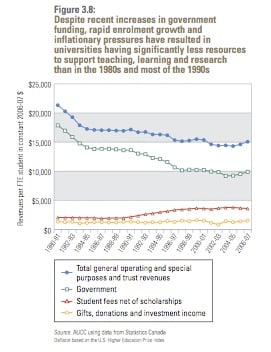 There. That’s a 70-page study in a few minutes. What’s to be done? There will always be readers who argue that many tens of thousands of students are going to university who shouldn’t: that they’d be better off in community colleges or skilled trades. Fine, but by now it’s going to take an ambitious program to dissuade all the students who’ve decided they can’t do without a university education. If they’re going to go, it would be good if their education could be well funded. There are a few options here. One is to permit those students who can afford it to bring their own money (or, yes, their parents’), in the form of increased tuition fees (partly compensated, for less affluent students, by substantially improved student aid.) But that’s not the whole answer. Nor is philanthropy, although every bequest helps. Governments are simply going to have to chip in.