'Plastic' Kate is a 'designed to breed' automaton: Hilary Mantel 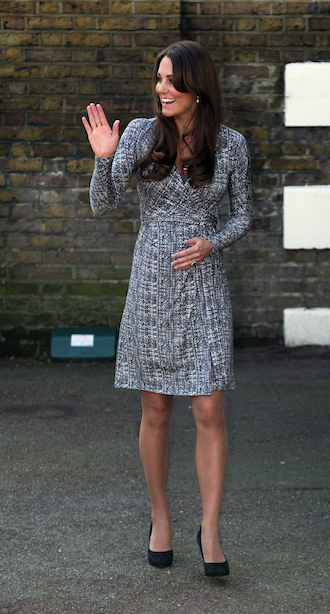 “Her eyes are dead.” “She appears precision-made, machine made.” “Designed to breed in some manners.” Those are a few of the harsh comments directed at Kate, duchess of Cambridge by Hilary Mantel, who’s won two Booker prizes for instalments of her popular Thomas Cromwell series. They come from a biting lecture,  “Royal Bodies,” delivered on Feb. 4 but just noticed by the press, at the British Museum for a London Review of Books series. While the lecture covers the baby-making qualities of everyone from Anne Boleyn to Marie Antoinette and Diana, princess of Wales, Mantel’s criticisms of Kate are its heart.

“Kate becoming a jointed doll on which certain rags are hung. In those days she was a shop-window mannequin, with no personality of her own, entirely defined by what she wore. These days she is a mother-to-be, and draped in another set of threadbare attributions…Kate seems to have been selected for her role of princess because she was irreproachable: as painfully thin as anyone could wish, without quirks, without oddities, without the risk of the emergence of character. She appears precision-made, machine-made, so different from Diana whose human awkwardness and emotional incontinence showed in her every gesture. Diana was capable of transforming herself from galumphing schoolgirl to ice queen, from wraith to Amazon. Kate seems capable of going from perfect bride to perfect mother, with no messy deviation.”

Even Prime Minister David Cameron stepped into the controversy, calling Mantel’s comments “completely misguided and completely wrong.” The tabloids, needless to say, have gone ballistic. And, for them, the timing couldn’t be better, for they could juxtapose Mantel’s biting works with new pictures of Kate. Tuesday, she appeared at her first engagement in two months. Showing off her baby bump in a close-fitting wrap dress, she visited one of her charities, Hope House, an addiction recovery centre foe women in London.

Though seemingly harsh for the sake gaining attention when it comes to Kate, Mantel’s lecture is also a rollickingly good read, especially when she highlights the regal gilded cage–“everybody stares at them, and however airy the enclosure they inhabit, it’s still a cage”— in which the Windsors live:

“I used to think that the interesting issue was whether we should have a monarchy or not. But now I think that question is rather like, should we have pandas or not? Our current royal family doesn’t have the difficulties in breeding that pandas do, but pandas and royal persons alike are expensive to conserve and ill-adapted to any modern environment. But aren’t they interesting? Aren’t they nice to look at? Some people find them endearing; some pity them for their precarious situation; everybody stares at them, and however airy the enclosure they inhabit, it’s still a cage.”