In my hometown of St. Catharines, Ont., the last Saturday of September brings the Grape and Wine parade—a fun, child-friendly celebration of Niagara’s contribution to our national drunkenness. Join me as I attend the parade for the first time in 25 years:

9:48 a.m. We set up across from City Hall, just down from the viewing stand and just up from the elderly lady in the “Will work for wine” T-shirt. Behind us, at a church-run snack table, a sign announces that passersby are welcome to take a free apple as a gesture of God’s love. An Italian sausage, however, will set you back four bucks because the hydro company does not accept payment in love gestures.

9:54 The parade doesn’t start until 11 o’clock, which gives everyone plenty of time to brag about when they arrived downtown to Get a Good Spot. The exchange between two women in line for coffee is typical. “I got here around 8.” “Really? We were totally set up by 7:30.” Subtext: You are a terrible mother, first woman.

11:07 At the front of the parade, this year’s marshal: Chewbacca! If you ask me, nothing gets a parade off to a stronger start than the frank admission that organizers could not attract a human to lead it. At minimum, they should have enlisted a better-known fictional character like Harry Potter or Donald Trump.

11:14 I didn’t know the Grape parade had a theme—and had I known, I’d have assumed it was Please Stop Laughing at Our Floats. But this year several of the floats commemorate the War of 1812, including one with a giant banner that reads: “1812-2012: 200 Years of Peace.” Being a stickler for historical accuracy and also a huge jerk, I loudly point out that the war didn’t end until 1814. Feschuk 1, Parade 0.

11:16 It’s still early, but if I had to pick my favourite War of 1812 re-enactor so far, it would definitely be the soldier in the period-accurate Nike cross-trainers.

11:23 Perhaps everything you need to know about Niagara’s wine festival—which culminates with the parade—can be summed up in this quote from its executive director, who said in the local paper, “We had Platinum Blonde on opening night and they were amazing!” That’s right, baby: WE GOT PLATINUM BLONDE. Suck it, Hamilton!

11:38 I can exclusively report the regrettable news that the horse-poop-removal industry in our country has not advanced technologically in a quarter-century. We still rely on the shovel and the wheelbarrow. It’s really no wonder we’re losing to the Chinese.

11:46 The Rose Queen and her Court—from the Rose Festival in the neighbouring city of Welland—arrive atop a convertible and the question has to be asked: was it really necessary to make the second runner-up wear a sash that proclaims her Second Runner-up? Once the competition ended, could the Queen not have decreed it undignified for the First Runner-up to lord it over the Second Runner-up on such a public stage? I guess this is what you get when a citizenry allows its municipality to be ruled by an iron-fisted flower monarch.

12:08 Hey, look, it’s the highlight of any parade: People Sitting Glumly on a Float. And they’re being followed today by a dozen bank tellers with thunder sticks. “That’s pretty much all I need to see in order to decide to move my entire portfolio to that bank,” says no one.

12:27 The parade is almost over and there hasn’t been a single clown yet—not one. And where is the A&W Bear and why aren’t people on floats throwing candy and why isn’t everything exactly the same as it was in my childhood WHEN EVERYTHING WAS PERFECT AT ALL TIMES??

12:34 A final note: the Grape and Wine parade featured a number of cheerleading teams and academies—so many that I feel confident in stating for the record that we, as a nation, are good for cheerleaders. We do not require any more eight-year-old girls to paint on thick, sparkly eye makeup and thrust their pelvises in a sexualized manner. We are good for bare midriffs and self-esteem issues. Sure, Niagara may have lost most of its manufacturing jobs, but it’s in terrific shape if the key to prospering in the global economy turns out to be human pyramids. 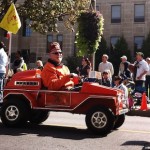 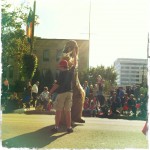 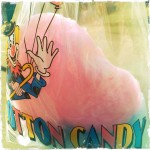 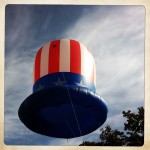 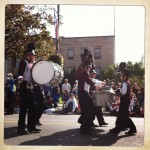 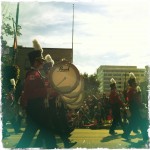 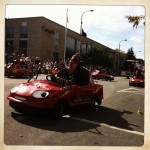 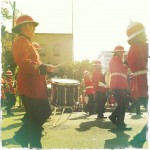 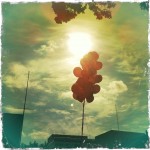 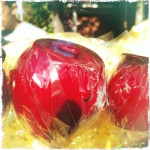