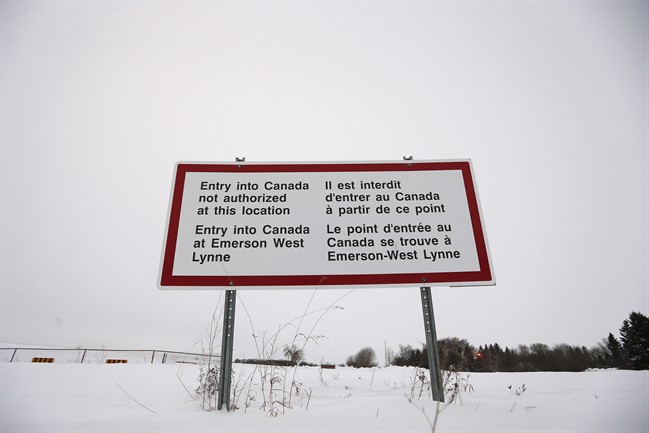 A sign is seen near Emerson, Man. Thursday, February 9, 2016. Refugees have been crossing the closed border port into Canada at Emerson and authorities had a town hall meeting in Emerson to discuss their options. THE CANADIAN PRESS/John Woods

OTTAWA – A newly released federal survey on attitudes towards immigration suggests Canadians are somewhat more enthusiastic about accepting economic migrants than they are about refugees.

While 52 per cent of those polled in the Immigration Department’s annual tracking study felt the right number of immigrants were coming to Canada, 23 per cent thought it was too high.

Meanwhile, 40 per cent felt the right number of refugees was being admitted and 30 per cent thought that figure was too high.

So while the data might not reflect how attitudes have shifted since those developments, it’s telling for what it was probing for in the first place, suggested Jack Jedwab, the executive vice president of the Association for Canadian Studies and co-chairman of an upcoming conference on integration and immigration.

“I think what the government is trying to get at is the issue of the extent to which people are more preoccupied by the increase in refugees that’s happening in a lot other places in the world,” he said.

While the survey did suggest some differences in viewpoints on refugees versus other classes of immigrants, Jedwab said they aren’t substantial.

“Right now, we’re seeing globally an effort on the part of elected officials to try to make those distinctions — refugees bad, economic migrants good, that’s the distinction that’s being made in the States to some extent,” he said.

The survey was done ahead of the release of the immigration levels plan, published in October, and also before the federal government received a report from its economic advisory council that would recommend a massive increase in the number of immigrants to Canada, from what had been about 260,000 a year to 450,000.

The survey did probe Canadians’ appetite for an increase. Respondents were asked to what extent they’d support boosting levels of economic immigration by 100,000 people over the next five years and 42 per cent exhibited some level of support for the idea. If the number ratcheted up further to 200,000 over five years, support fell to 38 per cent.

The Liberals eventually nixed any major increase, going instead with a modest uptake in admissions to around 300,000.

There was some crossover between this year and last year’s study.

Meanwhile, about 46 per cent of those polled in 2016 felt that refugees have a positive impact on the Canadian economy, up from the 41 per cent who felt that way in the survey done last year.

The 2016 survey results were published on the federal government’s polling research report website on Wednesday.