Poll: When is the new royal prince or princess arriving?

All eyes are on Kate, duchess of Cambridge 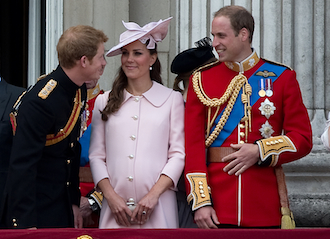 The media is camped outside St. Mary’s Hospital in London. Those not sleeping there overnight are obsessively checking smartphones for the slightest hint that Kate, duchess of Cambridge, may be, possibly, going into labour.

Reportedly, there are detailed plans to get the princely father-to-be from his job as a search-and-rescue pilot in Wales to London in time.

And this morning came word that another great-grandchild is on the way. Zara Phillips, Princess Anne’s daughter who won silver at the London Olympics, announced that she and her husband, rugby star Mike Tindall, are having a baby in the New Year.

For now, there is nothing to do but obsess about trivia, such as the exact nomenclature of the new baby’s title. First the backstory: Earlier this year everyone realized that, unless Her Majesty did something, the third-generation heir wouldn’t be a prince or princess, but the child of a duke. So Elizabeth II changed the rules to upgrade the title of her third great-grandchild in this official notice:

The Queen has been pleased by Letters Patent under the Great Seal of the Realm dated 31 December 2012 to declare that all the children of the eldest son of The Prince of Wales should have and enjoy the style, title and attribute of Royal Highness with the titular dignity of Prince or Princess prefixed to their Christian names or with such other titles of honour.

While the title change became public in January, now everyone has oh-so-much time on their hands that they have the luxury of delving into an extended worry session about whether there’s a “the” in front of the name or not. (According to expert Joe Little of Majesty, the answer is no.)

@MajestyMagazine So says THE Joe Little of Majesty Magazine. ;-)

Given everyone is just waiting and watching, the only thing left to do is launch a poll on when you think the royal baby will make his or her grand appearance. You can take a flutter on an auspicious day — July 14 is Bastille Day in France — or throw a dart at a date. For the curious, betting firm William Hill has calculated the odds of when it thinks the baby will born.