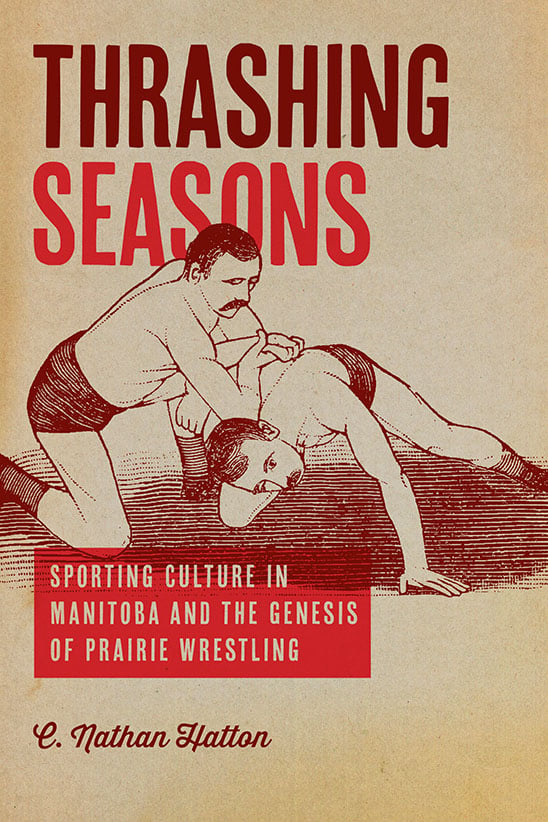 Generations of Canadians have grown up with pro wrestling. Some followed Stu Hart’s Calgary-based Stampede Wrestling while others watched WWF (now WWE) matches, where legends like Hulk Hogan and “Rowdy” Roddy Piper turned a pseudo-ballet into massively lucrative sports entertainment. But the sport’s roots in Canada go far back, and cast a longer shadow than we may realize. Thrashing Seasons takes an intriguing look at old-time professional wrestling in Manitoba, with a view to illuminating that history, and its broader meaning. Hatton, a professor at Lakehead University, is also an experienced amateur wrestler. He believes the province’s sporting culture, along with concepts like masculinity and ethnicity, can be viewed “through the lens of wrestling.” By providing a “matside people’s history,” he achieves a new appreciation for wrestling on the Prairies, and of the social values it expressed and furthered.

In 19th-century Winnipeg, pro wrestling rivalled boxing as the sport of choice. Participation was seen as an effective “character builder for young men,” and a way to combat “effeminacy.” Early styles focused on grappling (catch-as-catch-can) and martial arts (such as glima, a Scandinavian folk tradition that goes back to the Vikings). Outright fakery was an ongoing concern, writes Hatton.

The matches were often held in booze-filled saloons and taverns. There were shady promoters and popular local talent. Some legendary wrestlers, including Frank Gotch, the heavyweight champ credited with popularizing wrestling in the U.S., even showed up in Manitoba. But the ring was also used to create conditions for ethnic pride and interethnic tensions, Hatton writes. During the 1896 to 1914 Western boom, immigrants fed that dynamic, and tendencies to racism and Anglo-Canadian nativism were played to the hilt by both wrestlers and promoters.

“The sport’s roughness, so heavily emphasized in the 1920s,” noted Hatton, “gave way to orchestrated mayhem in the 1930s.” The rugged Prairie spirit remained, but was cleverly masked by wrestling promoters who wanted simply to entertain audiences. It’s a strategy that WWE chairman and CEO Vince McMahon, who built an empire in sports entertainment, could have conceived in his very own playbook.