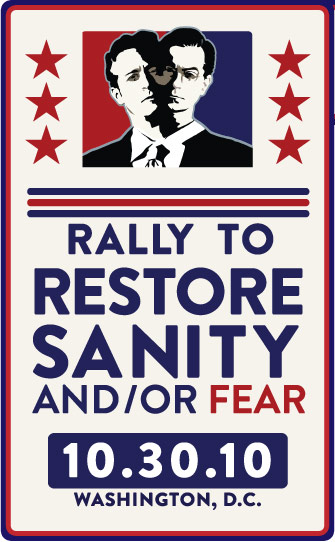 The Daily Show goes through periods when it’s hot, and periods when it’s not so hot; there’s disagreement on whether the show is on a hot or cold streak, and every viewer will have his or her own idea of when the show is at its best. This is a difference, I think, between an every-day show (or four times a week, at least) and a weekly show. Weekly shows tend to fall into irreversible decline: they can get their groove back, un-jump the shark, but usually they reach a peak and then fall from that. When the producers of a weekly show tell us that they’re going “back to basics” and making the show as good as it used to be, we really know it’s doomed. But for a show with over 150 episodes a season (instead of 22 or 13), each individual show matters less, and the quality of the show fluctuates with current events, the mood of the people working on it, everything you can name. Daily shows can fall into decline and never come back, but they often go through rough and smooth patches instead.

So if someone wants to say that The Daily Show is going through a rough patch, that’s a legitimate argument to make – I’ve made it at times; everyone’s made it when they don’t like what the show is currently doing. I think the early Obama era, contrary to expectations, was a good time for The Daily Show: people thought that with the Bush administration gone, he’d have less material, but in fact it freed him up in a way. The Bush material was being shared with all the other talk-show hosts. The Obama era gave new life to Stewart’s favourite target, Fox News, and provided all kinds of political jokes (about liberal frustration with Obama, for example, or the dysfunctional nature of the health-care negotiations) that weren’t in the late-night comedy mainstream at the time. Other hosts, apart of course from Colbert, played down the political humour for much of 2009, wrongly believing that there wasn’t much funny about the Obama presidency; this allowed Stewart to do his own thing for a while.

Lately, especially since his “Rally to Restore Sanity,” there’s been some frustration with Stewart on the part of his core audience (generally a liberal audience) that mirrors their frustration with Obama’s compromises. Conservatives see Stewart as someone who claims to be criticizing “extremism on both sides” while using that common-sense pose as a way to attack conservatives. Liberals are frustrated with the both-sides routine too, but for a different reason: they see it as a dodge to avoid being a fighting liberal, or acknowledging that both sides are not equally bad. Stewart likes to see his country as a common-sense type of country, full of common-sense type of people, being torn apart by politicians and the media. Many liberals are starting to reject this idea, seeing the U.S. instead as an irrevocably divided country along cultural, religious and political lines – and they’re frustrated that Stewart doesn’t take a stronger stand for their values. There were liberal complaints that the “Rally to Restore Sanity” was not a political rally: for liberals, the only way to restore sanity was to keep the Republicans out of power, and Stewart didn’t try to do that. He thinks you can separate common sense from everyday politics, whereas there’s an increasing sense among his fan base that there is no separation.

That idea, the idea that liberals see Stewart as a kind of comedic Obama figure, and that their problems with Obama are mirrored in their problems with Stewart, is made fairly effectively toward the end of this long anti-Stewart article by Tom Junod. (“They both gained moral authority by seeming to rise up in answer to our terrible times … and yet somehow they have both ended up as political figures who insist that they are above the troublesome fractiousness of politics.”) Unfortunately, to get to that point, we have to get through a lot of complaints that don’t really make sense to me. Much of the piece is the usual complaint that Stewart hides behind the pose of being “just a comedian” whenever the going gets tough. But I don’t think it’s just a pose. The Daily Show may not be non-partisan, but a genuine partisan political comedy show would take a different tack – it would be much more urgent, more hectoring, and above all, would be much more willing to forego audience laughter for the sake of a political point.

Now, it’s all well and good to say that Stewart isn’t funny enough or sharp enough. As I said, I’ve done it at times. (Right now I think he’s doing quite well, though he is struggling a bit with the fact that Obama jokes have seeped into the mainstream of comedy again, leaving him looking for other things to joke about. Colbert’s method of dealing with this problem is to dig deep into specific, wonkish issues like campaign finance. But Stewart’s show can’t really get that wonkish; it depends on broader political humour.) But this piece seems to want to criticize him for not being something he can never be. More than that, I didn’t get a clear sense of what exactly he thinks Stewart does best: does he think Stewart would be funnier if he were more partisan? Does he think Stewart should take himself less seriously or more seriously? Basically, Junod just doesn’t seem to like the image that Jon Stewart has created; criticism of the show is almost beside the point. But the problem with criticizing an image, rather than a performance, is that it’s almost beyond the performer’s ability to fix. Which may well be the point.