Quebec and the NHL arms race

Subsidizing NHL arenas is ultimately a means of subsidizing a cartel 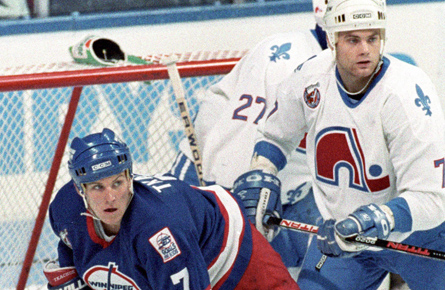 You knew that when the smoke of an arena controversy became visible, the sports-as-culture warriors would soon come riding over the hill. David Asper pops up in today’s National Post to observe that most of us accept the idea of government funding for high-culture venues like concert halls, theatres, and galleries. “To define ‘culture’ narrowly, without including sports, is elitist,” he complains. (Strictly for form’s sake, I should offer the riposte: what’s so bad about elitism?) “If we are to have a legitimate definition of our national culture, it must be based on the totality of who we are and what we do. Places where professional sports teams play are no less houses of culture than the opera, the theatre or the art gallery.”

The question you should be asking Mr. Asper is “So what, rich guy?” He is, in my view, quite right; sports are part of our culture. I would even argue that they are a morally elevating part of that culture—a medium for the cultivation and display of courage, duty, justice, and fair play (a crucial, almost defining element of our civilization that is not at all the same thing as “justice”). But that premise is not enough, not nearly, to establish that massive public funding for professional sports venues is proper or necessary.

Turn his argument on its head and set aside high culture: what important cultural institutions don’t we depend on governments to build? Would Asper argue that restaurants don’t define a city or that they aren’t places where highly civilized imaginative pleasures are expressed? Doesn’t a good clothing store or a furniture shop have a clear cultural dimension? A shoe store? Aren’t hairstylists, skate parks, comic shops, Apple Stores, recording studios, and the parlours of small-town piano teachers all enablers of cultural expression? Should all these things be nationalized and paid for by the state?

The relevant fact about live National Hockey League games is not that they are not “culture” but that they are owned by a profit-maximizing cartel which limits access and squeezes every penny it can get out of that access. Here in Edmonton, where the owner of the Oilers is trying to get an arena built at staggering municipal expense, you often hear arguments to the effect of “Oh, we bought an art gallery for a non-profit company, so we can certainly buy an arena for a billionaire.” It already sounds preposterous when you put it in plain English like that, and it’s even sillier if you pause to compare the function of an art gallery to the function of an NHL hockey rink.

I am the last person on earth the Art Gallery of Alberta would pick as a defender, but an art gallery is at least intended to provide a public good in the strict technical sense: it takes assets nominally owned by wealthy people and makes them available, at a low price not set in a profit-maximizing way, to virtually unlimited numbers of people—without affecting the value of the assets. That, in fact, is the historical origin of public art galleries; they were designed to multiply the benefits of a shared cultural heritage by extracting paintings and sculptures from vaults and putting them before the public in a safe, secure, orderly manner.

NHL hockey is simply not a public good according to an economist’s definition. Game attendance, at least, fails both tests: it’s both rivalrous and excludable, in the sense that you don’t get to attend if you don’t have a ticket, and buying a ticket (at a market-clearing price or lower) excludes someone else from having one. That does not mean there aren’t external benefits from the sale of that private good, in much the same way that there might be positive net external benefits from living near a good bakery even if you don’t buy bread. But using public funds to subsidize that good would still constitute a relatively pure transfer (a theft, some might say) from the people who have no use for it to the people who do. It would be like specifically underwriting pumpernickel production on the premise that bread is, in general, a good thing that is an important part of Western culture (as it certainly is).

Asper, of course, doesn’t come close to acknowledging the wider point that subsidizing NHL arenas is ultimately a means of subsidizing a cartel—of using the gullibility and open-handedness of politicians in one city to threaten those in another. Nobody is discussing expanding the league, and further expansion is difficult in principle; even leaving aside the state of the NHL’s overall finances and the current health of the economy, about thirty teams seems to be the natural upper bound for a competitive structure that isn’t organized like soccer (with meaningful parallel competitions and relegation/promotion between divisions). Quebec’s arena proposal is a means of darting ahead in the queue for troubled franchises in other cities, franchises that are ceaselessly seeking their own sweetheart deals for cheap rent, non-hockey revenues, and other subsidies.

This action is understandable, since Quebec has already been cheated out of NHL hockey by a richer urban rival in the past. But the overall effect is to create an inane arms race, a contest to see who can throw the most money at NHL owners and players. It’s bad enough that cities behave in such a sordid, compromised manner; we really don’t need all three levels of government working together to raise revenues and salaries for a private profit-maximizing business.