Reading between the lines of Garry Breitkreuz’s gun registry column 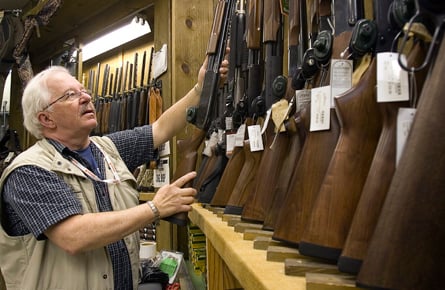 Louis Andre Gregoire replaces a shotgun in the rack in a downtown Montreal outdoor store. THE CANADIAN PRESS/Paul Chiasson

Why the gun registry needs to go.

The media war over the hotly contested long-gun registry is in full swing, and it isn’t pretty. The Canadian Association of Chiefs of Police (CACP) is lobbying hard to keep our tax dollars flowing into the black hole that is the registry.

Goddamn those police chiefs – haven’t they see the Star Trek reboot? Those black holes are spooky. Spock fiddled with that damn red matter and, boom, suddenly there’s a black hole and they’re getting thrown back in time. I don’t have the sideburns to make it through the 1970s again!

Taxpayers should be incensed at the CACP for co-opting the role of policy-maker. When law enforcement managers try to write the laws they enforce, history has taught us we risk becoming a state where police can dictate our personal freedoms.

Happily, this hasn’t happened yet, so Garry Breitkreuz still has the personal freedom to be emotionally hysterical.

Policy-making is solely the mandate of elected governments on behalf of the people.

While police can and should be consulted on the efficacy of current policies, police chiefs should not be lobbying to tell the government which laws it should adopt. The tail is wagging the dog with such intensity, the pooch is a veritable blur.

How dare the people whose jobs are actually affected by a law speak up about the relative merits of that law. That would just be utterly and totally… useful? Relevant? What’s the word I’m looking for… helpful?

Why are the police chiefs so strident in their quest to keep the registry in place? They won’t admit it, but it appears they don’t want Canadians to own guns.

Did you catch that? It “appears” they don’t want Canadians to own guns. I write a lot of op-eds for people and “appears” is a great verb to use if you’re a bit short on evidence (ie. you have no evidence) but want to instantly generate a nice little conspiracy-theory vibe. It’s easy, just watch – it “appears” that Garry Breitkreuz wants to sell Canadian women of child-bearing age overseas as a way of reducing the federal deficit. He won’t admit it, of course, but how can we take the word of a man who “appears” to want to do that? Shame.

To that end, they need a database that will help them locate and seize those firearms as soon as a licence or registration expires.

Here’s a thought if you actually believe this to be true: DON’T LET YOUR REGISTRATION EXPIRE. Just don’t. Actually go to the trouble of filling out the form. Danggummit – we WANTED to seize their firearms and we woulda got away with it too, if it wasn’t for the fact they made the minimum effort required to abide by what is, at the end of the day, a system of firearms control that demands very little of the gun owner.

Now the opposition has introduced a motion to kill Bill C-391, the private member’s bill that seeks to repeal the gun registry, prior to its third reading in the House of Commons… This after 33 witnesses testified before the federal Standing Committee on Public Safety and National Security, with many experts advocating that the registry is totally useless. As chair of that committee, I was flabbergasted when the opposition parties conspired to approve the motion, which could negate the important testimony of the witnesses who took the time to address Parliament.

I’m telling you: My gast was completely flabbered! How dare opposition MPs ignore the opinions of experts? That’s OUR shtick. Didn’t you see us with the census thingy? WE OWN THAT SHTICK!

The opposition’s desperation is twisting our parliamentary system to avoid an outcome they don’t want.

And THAT is totally my boss’s shtick! SWEET MOTHER OF CANOLA: THEY’RE STEALING ALL OUR SHTICKS!!

The 12 rural New Democrats who supported Bill C-391 at second reading will be pivotal in the Sept. 22 vote… This NDP support bodes well for Bill C-391, as those 12 MPs can vote in favour of it once again, assured that they represent the majority of NDP supporters on this issue. We can only hope the rest of the NDP caucus will see the wisdom in following suit.

Always good to spice up an op-ed with a laugh line.

Until Bill C-391 is passed, the media war will continue. Let’s get rid of this political aggravation so the government can address measures that actually contribute to the safety of all Canadians.

Unless some idiot prorogues Parliament again and kills his own crime bill for a third time.