Reading between the lines of Jim Flaherty's speech 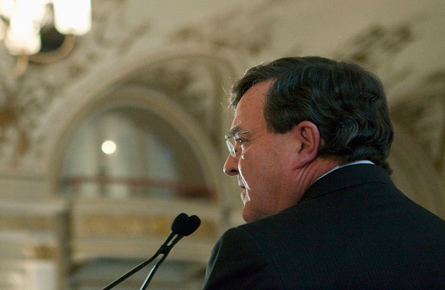 Minister of Finance Jim Flaherty makes a speech at the Canadian Club of Ottawa at the Chateau Laurier in Ottawa on Tuesday Sept. 21, 2010. THE CANADIAN PRESS/Sean Kilpatrick

The venue: Canadian Club of Ottawa

It’s a pleasure to address this well informed and distinguished group of opinion leaders.

The fall session of Parliament has just started.

It’s a good time for some serious, frank talk.

We have some important choices to make.

Choices like: should I adapt my speaking style to the audience I’m appearing before, and include more than nine words in some of my sentences? Or should I speak to this “well-informed and distinguished group of opinion leaders” in the same clipped manner most people reserve for domesticated animals?

We’ve gone through an extraordinary time the past two years.

A synchronized recession, the deepest since the Depression.

You could tell the recession was synchronized because it used Vaseline to keep its hair in place.

That’s why our government’s main focus has been – and will continue to be  – the economy.

That, and the vengeance.

We’re punching so far above our weight that we’re kind of like The Hulk of the world’s financial community. JIM MAD! JIM SMASH GLOBAL BANK TAX!!

And now the heavyweights are coming to us for lessons. In my travels, at international meetings, I hear it again and again. Leaders of the world, looking at Canada and our economy with envy.

And, lately, with what can only be described as intense sexual longing. I’m pretty sure I caught Geithner feeling up our monetary policy.

You’re familiar with the reasons Canada stands out – now, more than ever.

The lowest debt burden of the major advanced economies – by far.

These are huge accomplishments.

Opposition politicians who talk down our economy for political gain at every opportunity.

Unlike when we were in opposition, when we were all about providing the government with moral support and backrubs.

To them I say: rise above petty politics.

I implore you: do that thing that I am about to not do.

Do your job as critics. Criticize this government as you need to. But don’t tear down our country for short-term political gain to do it.

We all have the right to celebrate our performance during the deepest economic crisis since the Great Depression and the world-leading strengths of our economy.

We cannot and must not be complacent.

Yes, Canada has outperformed during the global recession. But still too many Canadians are looking for work.

Maxime Bernier, for one.

Canadians are anxious… The recession isn’t their fault. They look to us for leadership, so we can get through it together.

And looking to us is fine, so long as they don’t actually make eye contact with Mr. Harper. AVERT YOUR GAZE, SASKATCHEWAN!

We must implement our stimulus plan fully, and keep helping those who need it.

I’d explain more fully, but I’m pressed for time. I have to be back for Question Period – and all those Economic Action Plan signs on Sussex Drive aren’t going to count themselves.

But there are risks ahead, serious risks.

And beyond the economic risks, there is, I regret to say, a political risk. That is the risk of an unnecessary election, an election that would jeopardize our economic recovery, just as we enter the home stretch.

Is anyone actually threatening an election? No. Has anyone threatened one for the past year? No. But Mr. Harper told me to say this and he gets mad when I don’t listen. DEEP DOWN, THIS MAKES ME FEEL LIKE LESS OF A MAN!

Our government isn’t seeking one.

But the opposition coalition – the Michael Ignatieff-NDP-Bloc Québécois coalition – has been consistent in one thing, if only one thing.

From the beginning of the global economic crisis, they have put their own self-interest above Canadians.

More than once, when they’ve thought they had a shot at seizing power, they’ve threatened to force an unnecessary election – knowing it would put Canada’s recovery in jeopardy.

And in response we have selflessly prorogued Parliament for you, Canada. For you.

Just five short years ago, Canada was led by a weak, dithering, and directionless government.

They were so weak they could barely produce a $13-billion surplus for me to piss away.

Today, our government is strong.

Our federation is united.

Reneging on promised plans to create child-care spaces. Abandoning promised efforts to reduce health care wait times. Twice killing our own anti-crime measures in the name of crass political survival. It all balances out.

But most important, we met the challenge of the global economic crisis head-on, with our world-leading Economic Action Plan…

Once the crisis hit we didn’t panic.

How could we panic when we neither saw the crisis coming nor realized it had arrived?

Instead we went to work.

We listened to Canadians in one of the largest pre-budget consultations in history.

We fast-tracked our budget – the earliest in Canadian history.

I am going to speak a little more quickly here so you don’t have time to realize that the reason we had to fast-track our budget is that, only a few months earlier, I had personally released the single-most inaccurate and widely mocked economic update in the history of both Canada and math.

We enhanced EI benefits for those hit hardest by the global recession.

And we made job-creating investments in roads, bridges, buildings, and other infrastructure that will leave a legacy for future generations.

This sewer system is <sniff> for you, Billy. All for you. Sorry about health care.

Ladies and gentlemen, an unnecessary election would put all of this at risk.

How? I’m not going to tell you. But not because there isn’t a reason. THERE’S POSSIBLY A VERY GOOD REASON, I’M WILLING TO WAGER.

Throughout the recession, the Ignatieff-NDP-Bloc Québécois coalition has demanded we raise taxes.

Boy, that “Ignatieff-NDP-Bloc Québécois coalition” thing sure is a mouthful. I hope you don’t mind if it short-hand it by calling them something more concise and terrifying like the “Legion of Doom” or “Human Ebola.”

Under an Ignatieff-NDP-Bloc Québécois government, nothing would be safe.

No part of our economy would be spared.

No taxpayer would avoid the hit.

The sweet relief of death could not come too soon for the despairing people of Canada!

Exactly which “experts” are making this curiously precise estimate about these vague, theoretical tax hikes? I’m not going to tell you. But not because they don’t exist. THEY QUITE POSSIBLY DO EXIST MAYBE!!

[Canadians] deserve better than a Liberal leader who would risk their jobs, their livelihood.

I know he’s been abroad for a long time.

But here in Canada, you don’t tell people what to worry about.

You listen to Canadians and they tell you.

That’s a night-and-day difference from our Conservative government under Stephen Harper.

The record shows we take a principled, practical, and prudent approach to leadership.

I am hoping my claim will come across as less patently absurd if I fancy it up with alliteration.

Whereas our leader eschews power in all its forms, preferring to meditate while leaving all decisions of consequence to the Sorting Hat.

And they know we need a stable government, to ensure our economic recovery and long-term growth.

The outcome [of the next election] will be a majority government, one way or another.

Or the reckless coalition of Michael Ignatieff, the NDP, and the Bloc Québécois.

Mr. Harper made me say those exact words. He even made me write them on my arm so I wouldn’t forget. That’s why I smell like Sharpie.

In the global recession, the ship of state has had a difficult voyage.

But we can see the harbour lights.

I’m being lyrical here. Roll with it.

And that’s just when a would-be captain and his ragtag crew are trying to storm the bridge.

Pirates! Don’t you understand? They were pirates the whole time!

If they seize the wheel, ladies and gentlemen, they’ll have us on the rocks.

Bear with me… almost done…

And that’s not how this voyage should end.

Ladies and gentlemen, welcome to the conclusion of your metaphor. Please drive safely.

The coalition… would squander our Canadian advantage, and limit our long-term prospects.

They would set us on the same downward spiral other countries are now trying desperately to escape.

Also, they’d give us scurvy and ravish our women folk.

It’s about ensuring Canadians can provide for their families…

Canadians get this, and that’s why they get what our government is doing.

That’s why they can trust us.

That’s why they know Stephen Harper’s leadership is the kind of stable, responsible leadership our country needs.

If I say the Prime Minister’s name three times during the speech, I get a lollipop when I get back to the Commons!

Our history shows we’re willing to work hard, to work together, and to make tough but balanced choices when necessary, for the sake of our achieving our shared goals.

A country as great as Canada couldn’t have been built any other way.

And our Conservative government under Stephen Harper wouldn’t do it any other way.

Four times! Now I get a hair tousling!

Thank you, ladies and gentlemen.

Thank you for attending a speech by a Finance Minister that included no numbers, information, forecasts or serious analysis of global economic conditions, but instead sounded like the political equivalent of an unhinged high school student’s poetry journal.