The new Ronald sports cargos, and a lady haircut circa 1976. Your move, Taco Bell. 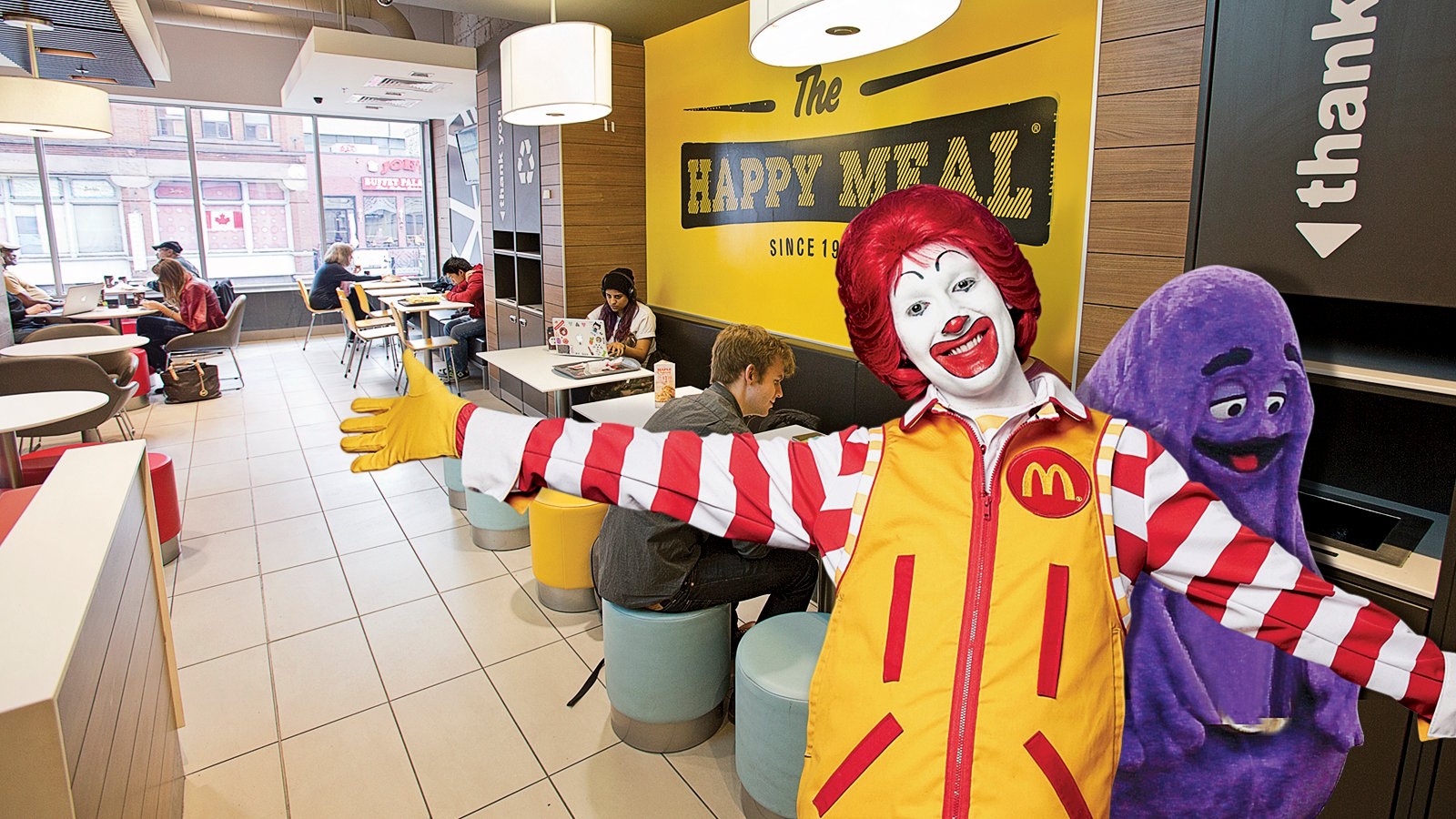 Did you hear that Ronald McDonald has been given a makeover? The famed fast-food mascot used to be a fright-white, nightmare-inducing hell clown with the painted-on smile of an actress who just lost the Oscar to Anne Hathaway. But that was the old Ronald. The new Ronald wears cargo pants!

McDonald’s—which introduced the world to fast food’s convenience, efficiency and crushing waves of regret—spent two years revamping its spokesclown. Two years! And in the end it came up with: Let’s lose the yellow jumpsuit and now he knows what a selfie is. Oh, and his new hairstyle brings him up-to-date with the look favoured by my Mom’s friends in 1976. YOUR MOVE, TACO BELL.

On the bright side, there must be dozens of rejected prototypes for Ronald’s new outfit, all of which are now available to be worn to award shows by Björk.

New slogan: “I Can Haz Marshmallowz?”

Old response to getting poked in the belly: Adorable giggle.

New response: 3,500-word essay on Salon decrying the epidemic of inappropriate touching in the workplace.

According to company mythology, Ronald McDonald lives in a fantasy world called McDonaldland—a place best known for its controversial breeding program, which yielded a number of citizens with the body of a man and the head of a massively oversized hamburger. These creatures had a tendency to gravitate to positions of authority—Mayor McCheese, Officer Big Mac—and were poised to seize absolute power over the fast-food kingdom, until their kind suffered a mass extinction during a 2008 weekend visit from Kirstie Alley.

The company has long asserted that Ronald represents “the magic and happiness” of McDonald’s. This means Grimace must represent “the saturated fat and probable gastrointestinal distress.” One of the unsolved mysteries of McDonaldland is how Grimace ever landed a gig as a company spokesblob. “OK, we want to draw attention away from the fact we serve unhealthy. Let’s create a grossly overweight fur monster and name him after a facial expression that conveys disgust!”

So why the new-look Ronald? According to the company’s “Global Relationship Officer”—which sounds like a position the United Nations would create for Gwyneth Paltrow—“customers today want to engage with brands in different ways.” That’s a trendy thought, but is there evidence to support it? From my experience, most people want to engage with McDonald’s the same way they always have—without leaving their car, or being seen by an acquaintance, or thinking about what they’re doing to themselves.

The best part of the media analysis about the makeover has been the manner in which McDonald’s executives explain the brilliant strategy behind their strategic brilliance.

They emphasize that the mascot’s new wardrobe was designed by the “Tony-award-winning theatrical designer for Beauty and the Beast”—because only a woman with Broadway credentials could ever have thought: Let’s try the clown in a rugby shirt.

And there is much self-congratulation over the red blazer and bow tie Ronald has added to his wardrobe, which he intends to wear on “special occasions,” presumably, including court dates and the Fry Guys’ gay wedding.

They also make it sound pretty cutting-edge that in only two years they managed to brainstorm their way to their mascot having his own hashtag, which was immediately hijacked. Asked one person on Twitter: “Why do you make life great for 5 minutes and then my heart & arteries & brain fluid all feel like toxic sludge? #RonaldMcDonald.”

Undeterred by the negative reaction, the company says Ronald McDonald retains his “dedication to the happiness and well-being of people worldwide.” As such, one assumes he will continue to do everything in his power to stop them from eating at McDonald’s.