Regal guessing games: from hats and brooches to whether or not Philip will be by the Queen's side 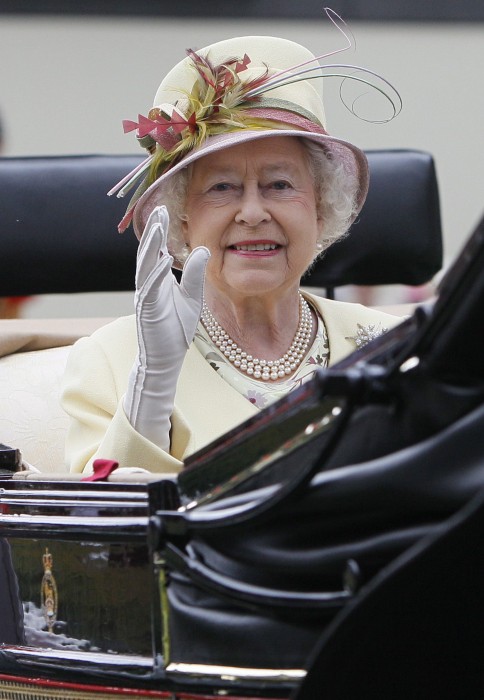 On Saturday, it’s the Queen’s birthday. No, not her real one (that’s on April 21), but rather her “official” me day, held in June in the hopes for better weather for all the troops that gather for the annual Trooping the Colour ceremony. Then on Monday, everyone moves to Windsor Castle for a church service for members of the Order of the Garter, the world’s oldest order of chivalry, and certainly one with the kookiest outfits. And finally, a week of pure fun and delight for the Queen—watching horses race at Ascot.

It’s also one of the rare times when the family gathers together—well, rare when there isn’t a Diamond Jubilee and Olympics in the same summer. The entire Windsor clan—the women wearing some serious millinery—watches the military parade in London and then goes out on the balcony of Buckingham Palace. Ditto for the Garter ceremony and Ascot. The Mad Hattery website will cheekily comment on all the hits and misses. And while most observers will casually notice what the Queen is wearing, others will be plunking down serious money on the colour of hat she’ll wear each day of Ascot. This is a country that will gamble on almost anything. Betting agent William Hill is giving 4-1 odds on blue, while straw is a wild card at 100-1. (Last year, William Hill and most punters were caught offguard when she wore pink to Ladies Day.)

Then there are more discreet bets on her jewelry. The Royal Order of Sartorial Splendor, which does a brilliant job at keeping up with royal fashions, has analyzed the last six year’s worth of brooches—Elizabeth II is never seen at an official function without a pin—to give royal jewelry aficionados background for this year’s display.

But the biggest guessing game will be over whether Prince Philip will be seen by her side. And if so, then where, and for how long. After spending five days in hospital for a bladder infection, he hasn’t been seen since leaving the London hospital last Saturday. Though the Court Circular, which tracks all official engagements, didn’t have him taking part in the Trooping the Colour, the palace finally confirmed on Friday that yes, he will be there.

Still up in the air is Monday’s Order of the Garter ceremony, in which participants endure a long walk while wearing incredibly heavy and cumbersome robes. If he’s smart (and not too stubborn), he’d give it a miss and pop back up at Ascot, where it’s a lot easier to vanish into the crowds.

It’s the last best royal show until the opening of the London Olympic Games on July 27.