Ex-Colleague Coyne has an excellent column on the emerging political split between the resource-extracting parts of the country and the sentimental nationalists who think every drop of bitumen and chip of timber sent abroad makes baby Jesus cry. I noticed one snippet, though, which goes to show how even the most trend-aware and detail-oriented columnist (that’s what he is!) can be held prisoner by persistent images of the past:

Whatever its merits or demerits as policy, [the mix of economic nationalism and environmentalism found among the NDP leadership candidates] amounts to ceding the resource-producing areas of the country to the Conservatives. Once, that might have been thought to mean Alberta. Today it means most of the West—the richest, fastest-growing parts of the country. Increasingly, it will mean Newfoundland and Nova Scotia, too.

Will mean? Newfoundland’s economy is probably already more resource-dependent, and particularly oil-dependent, than Alberta’s economy has been at any point in its history. For fiscal 2011-12, non-renewable resources provided 27% of the Alberta government’s own-source revenues. In Newfoundland the corresponding figure is 46%. Here’s how the shares of total industrial GDP earned by mining, oil, and gas stack up over the last ten years in the two provinces: 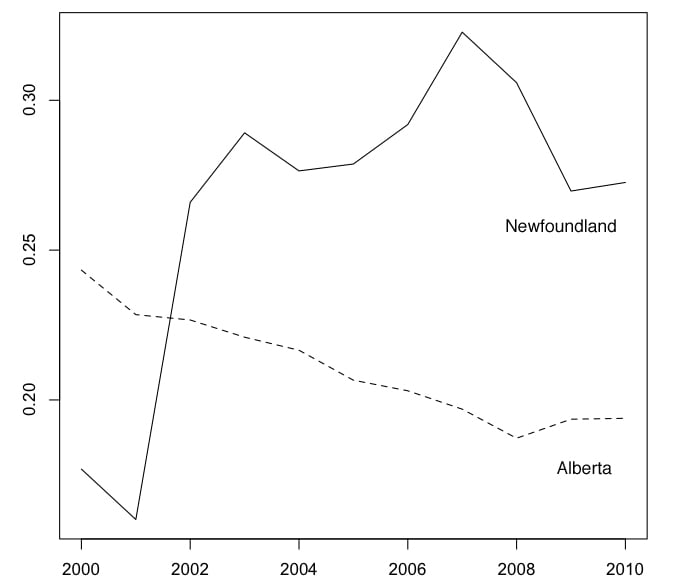 You may not realize that the energy dependence of Alberta has been in secular decline for at least 20 years now, with occasional price-driven upticks. I have to laugh when I imagine people who think of Alberta as a glorified sheikhdom getting in line to buy Mass Effect 3. A policy of “drill, drill, drill” doesn’t, on the Alberta evidence, turn everybody into drillers; but there is still a mysterious fear afoot in Canada that hewers of wood and drawers of water can’t possibly have children who become airline pilots or particle physicists.

There is a related argument, often heard here, that Alberta should be socking away more of its public revenue from non-renewable resources for the future, the way Norway does. But it’s not at all clear to me that it is smart for a non-sovereign jurisdiction that doesn’t control its borders to “save” for a totally different future populace. To be honest, it sounds a little bit like a con. Alberta’s economy began “diversifying” fairly rapidly at more or less the exact moment politicians stopped talking about centrally planned “diversification”. Centrally planned permanent “investment” of resource revenues seems somewhat likely to have the same quality.

When politicians want to spend current revenues on health and education, they’re quite happy to refer to that as an “investment”. Yet some of these same politicians would starve health and education of resource revenue today so that some of it can be used later when the “oil runs out”. As if our biggest problem right now weren’t getting that landlocked oil to market, so we aren’t left wallowing in it when technological progress eventually destroys the demand for oil and gas.

That’s the fear that keeps me up at night as an Albertan: that some a-hole in Palo Alto has already made cold fusion work on a coffee table in his garage. (In the wee hours I can see the nerdy S.O.B., hunched over a circuit board and an Erlenmeyer flask as ugly fluorescent light beats down on his shoulders.) Ideally, we would like the oil to “run out” approximately five minutes before that happens, whether it’s tomorrow or in 2100. And that “we” includes Newfoundland.