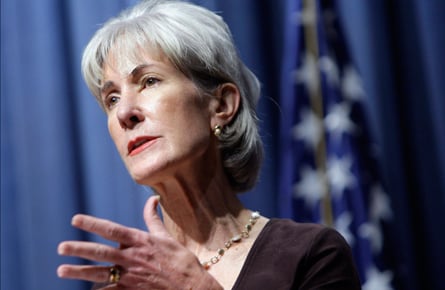 Speaking of health care reform in the USA… if you need a demonstration of what it’s up against, study the apoplectic response to new guidelines for breast cancer screening issued by the U.S. Preventive Services Task Force, an independent agency of the Department of Health and Human Services. The USPSTF has decided to recommend that women aged 40-49 should no longer bother obtaining mammograms as a matter of course; that women 50 and up need them only once every two years; and that breast self-examination is largely useless. The result has been the creation of an instant coalition of rage between conservatives paranoid about “death panels”—behold, an example of the real thing, already doing its genocidal work!—and conspiracist women paranoid about a male-dominated medical profession and its apparent desire to do away with them. (Some people, of course, manage to be both at the same time.)

Confronted with such a tag team, HHS secretary Kathleen Sebelius couldn’t throw her task force under the proverbial bus fast enough. She promised that the new guidelines “won’t set US policy”. In practice, she has thus established frequent breast cancer screening as a sacred taboo. The evidence on the costs and benefits of intensive screening is still evolving, but the debate is over. Even if other clinical agencies come to agree with the USPSTF, as they might, neither Medicare nor future Obamacare will be politically able to budge from the orthodoxy of routine annual screening for every woman over 40.

The key word here is “routine”. The coalition of excitables is behaving as if the USPSTF recommended that no woman under 50 should ever get a mammogram. What the USPSTF said was that the decision to start early regular mammography is, given present evidence, too complicated to be the subject of a simple fiat covering the entire populace. “The decision to start regular, biennial screening mammography before the age of 50 years,” they said, “should be an individual one and take patient context into account, including the patient’s values regarding specific benefits and harms.”

Every woman has a different risk profile, not only for breast cancer itself, but for the legitimate harms that can arise from overdetection, ranging from excess radiation exposure to complications from needless biopsies and surgeries. It is NOT, contrary to what some of the excitables would have you believe, a simple matter of avoiding the pain of mammograms and the psychological stress from false positives. (But, at that, it might be worth asking some of the more affluent critics: if more mammograms are inherently better for you, why stop at one a year? Why not one every two weeks? What price peace of mind?)

As Steven Pearlstein observes in a brilliant column for the Washington Post, the whole spectacle is about as unedifying as could be imagined. Of course, if you’re an American against nationalized health care, or just a Canadian who appreciates the benefit of having a radically different health system just a few hours’ drive away, you can take comfort in the overpowering evidence that the American public is still not ready to relinquish the benefits of personal control over the consumption of medical services. (Even if regulation of insurance programs has rendered those benefits largely theoretical.)

But one still doesn’t like to see what one might regard as the “right” side of the debate win for the wrong reasons—namely, that Americans and their media are no longer capable of exercising rudimentary logic or understanding the most basic nuances of science. Such a passion-wracked polity cannot survive as a liberal-democratic republic for too long, with or without socialized medicine. I mourn a little when I read a passage like this in the comment section of the San Jose Mercury News:

Ironically, mammograms do save lives. The U.S. Preventive Services Task Force acknowledged as much in its report. For example, since 1990 the breast cancer mortality rate among women age 40-49 decreased 3.3 percent a year, largely due to mammograms. But breast cancer is relatively rare in that age group, so the task force decided the risks of mammograms, including false positives that lead to anxiety and unneeded treatment, outweigh the benefits.
Tell that to any woman who was diagnosed in her 40s. I know several. I bet you do, too.

An important point underlying the USPSTF’s new guideline is that breast cancer is dramatically overdiagnosed in women under 50. Incredibly, the author of this op-ed, Patty Fisher, thinks the fact she knows a lot of women under 50 who were diagnosed with breast cancer is a refutation of this! (She has also told a flat-out lie, of course, about what the task force actually said; it acknowledged that for many women, the benefits of aggressive early screening may in fact outweigh the risks.) The relevant number, for the purposes of discussing the guideline, is not simply the number of women between the ages of 40 and 49 who have been diagnosed with breast cancer because of mammograms. The relevant number is the number of women between 40-49 who would forgo mammography until the age of 50 because of their risk profile, and then die of breast cancer specifically because the lack of early detection failed to catch a truly dangerous, fast-growing tumour. And the evidence suggests that there really aren’t that many of those women.

The San Francisco Chronicle went further in the quest to put a “human face” on the debate, hunting for individual women who have had breast cancers detected in their forties. Again, without access to extensive case histories, the reader cannot judge whether application of the USPSTF guideline would have actually harmed these women. But they are personally convinced, whatever mere statistics or even the details of their own cases might say. “I can’t believe [early mammography is] not saving a lot of women,” fumes cancer survivor Laura Scanlan. “It saved me.”

Well, there you have it. The great American syllogism for the 21st century. X benefited me, therefore X must be good for everybody, and not bad for anybody. I’m every woman: it’s all in me.