Flaws are okay, but no one voted for the man in that video 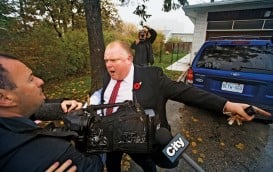 Let’s assume that Rob Ford survives next week—and given what I saw on that freak-out tape, I’m not sure I’m using “survive” in the figurative sense.

Is “Ford Nation” still four-square behind its plus-sized superhero?

This now seems the only operative question. Toronto city council has no legal means of ousting its mayor. A proposed amendment asking the provincial government to remove him is little more than faint hope. The mayor himself lacks the shame or honour to do the right thing by lowering his flag and heading for dry dock.

Unless … unless .. the new video (so named even though we’ve yet to see the first and second videos) triggers the gag reflex of the only people whose opinions matter to Ford: his voters.

You have to wonder. Not only does this two-minute, 53 second clip give form to our worst imaginings about the state of the mayor when high (“inebriated” doesn’t come close to covering it), it landed on the public like two-by-four to the temple. After six months of hype, the Fordites were braced for the ballyhooed video showing Hizzoner tugging on a crack pipe and taking the shiz out of Justin Trudeau. But this?

Why would this, and not the rest of the avalanche of revelation about Ford, matter to his supporters? Think about who they are. Six out of 10 are homeowners—most of them in the ‘burbs. Nearly half never got past high school, and more than half are first-generation immigrants. My favourite stat (and the strongest known determinant of a Ford voter): 65 per cent commute by car.

This all comes from a fascinating pile of data gathered by Zack Taylor, a professor of human geography at U of T who has looked deeper than anybody into the phenomenon known as Ford Nation. What he has found, in short, is the salt of urban Ontario. Working-class folks, with families.

It’s a great demo for a candidate fighting vehicle levies and property taxes. Not so great for one who goes snaky on camera while goofed on something a whole lot stronger than Labbatt 50. Because a lot of those voters worry about the effect of drugs in their neighbourhoods, or on their children. Because they perceive Ford as a candidate that, however flawed, keeps it real enough to push his agenda of reining in government and curbing the power of the downtown tax-and-spenders.

Many have been pleased to overlook what they saw at the mayor’s excesses. They’d give him mulligans on an episode or two of poor judgment—even ones involving narcotics. But this is different. The video is downright scary—a snapshot of the mayor when he’s out of his tree.

Those voters might accept Ford’s sheepish acknowledgements of such spectacle as “mistakes” made in “stupors.” But having seen him thus unhinged, surely they too would like some gesture, some meaningful step toward ensuring it doesn’t happen again.

No one voted for the man in that video.