Robin Hood fights the French on the beaches

Brian Johnson reports from Cannes: It's like the Normandy Invasion in reverse—Saving Private Robin 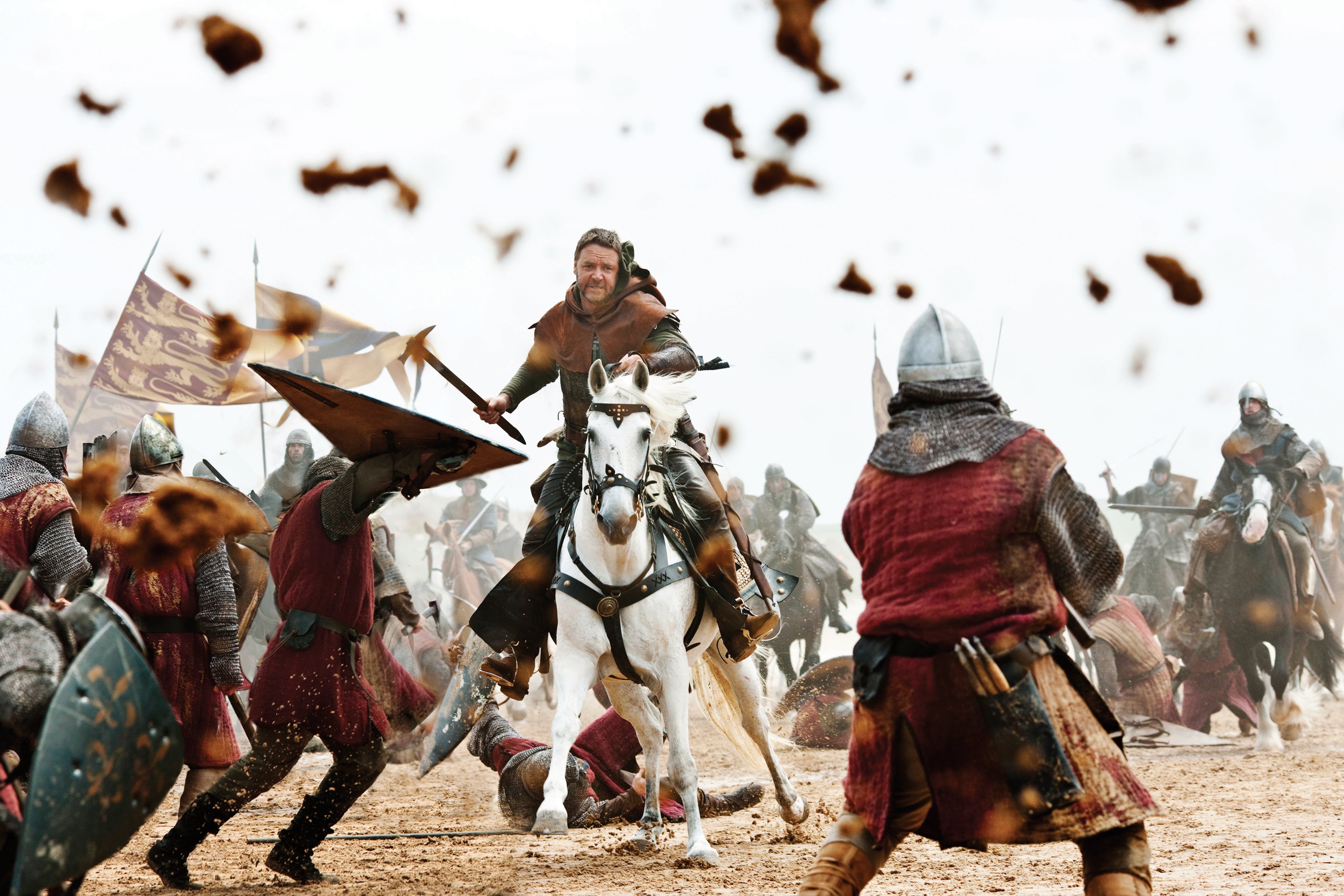 This morning we saw a press screening of Sir Ridley Scott’s Robin Hood, which opens the Cannes Film Festival tonight and hits  Canadian theatres Friday. We also watched its stars, a good-humoured Russell Crowe and a flirtatious Cate Blanchett, hold court in the festival’s first press conference. More on that performance later. But first some impressions of the movie. (Forgive the early judgment, but when you open Cannes, you can’t expect to keep the world’s opinions under wraps.)

To begin with, there was no small irony in seeing Robin Hood premiere in a French beach resort. Sir Ridley has rebooted the well-worn legend with an origins story, recasting him as a war hero leading the English in an epic battle against France. The French are the bad guys, and they’re  portrayed with a vitriol that would warm the heart of any Freedom Fries-loving American, as a gang of snide, sneaky, rapacious villains. The movie’s French title is Robin des bois (Robin of the forest). The action, however, is not set in Sherwood Forest. Robin doesn’t even get there until the final scenes. No, this is essentially a medieval war movie, full of pillaging, castle-sacking, battering rams and boiling oil–with occasional shades of Monty Python and the Holy Grail. The legend has also been retrofitted with contemporary resonance,  from references to atrocities against Muslim civilians in the Crusades to the tax-burden of a country drained by its military.

The new and improved Robin Hood is no mere common outlaw. A veteran of King Richard’s long and costly war against Islam, he emerges as an English Braveheart, a national resistance fighter, galvanizing popular sentiment against the cruel, tax-happy King John (who’s a dupe for the French). Fulfilling the legacy of a father he barely knew, Robin is a liberator who, in a flourish of historic invention, presents the treacherous King John with an early draft of the Magna Carta. . . and (spoiler alert) he leads British troops into battle as France invades England’s beaches with a vast armada of 13th- century landing craft. The scene plays like D-Day’s Normandy Invasion in reverse.  For a moment there, I thought I was watching Saving Private Robin. As if inspired by Winston Churchill, our hero is actualy fighting them on the beaches.

Sir Ridley is on familiar turf here. This epic,  which is a bit bloated at two-and-a-half hours, bears the distinctive stamp that he brought to both Gladiator and Kingdom of Heaven–gritty, sword-slashing combat mired in mud and fired with old fashioned romance. A lot of it is good fun. Even if the Merry Men interludes seem contrived, Sir Ridley knows how to shoot a bow and arrow, so to speak. And one thing is certain: its Australian star, Russell Crowe, makes a far sturdier Robin Hood than the laughable Kevin Costner (Robin Hood: Prince of Thieves). The filmmakers have roughened up Robin, giving him rugged leather breeches as opposed to tights. And they’re thrown some modern twists into the story. Blanchett’s headstrong Maid Marian  is quite the warrior in her own right, even if Robin does get her to strip off his armour after she runs him a bath. And Marion’s blind, ailing father-in-law, Sir Walter Loxsley (Max von Sydow), essentially asks Robin Longstride to impersonate her slain husband, which is how he becomes Robin of Loxsley.

Robin Hood, clearly sets the stage for a franchise. Sir Ridley, who’s recovering from knee surgery, couldn’t make the trip to Cannes, so he was not at the movie’s press conference to explain strategy. But when I asked Crowe (who’s a co-producer)about their ambitions for sequels, he told me they explained the film was originally mapped out as a seven-and-a-half our saga. Which means we’ve seen the first third of it. . . Hey, I’ve got to get to another movie, but more on that press conference in the next blog . . .