Rolling the dice in Liberia

Gambling in Liberia, both literally and figuratively—either way, it’s foreigners taking in all the chips and reaping rewards while locals look on 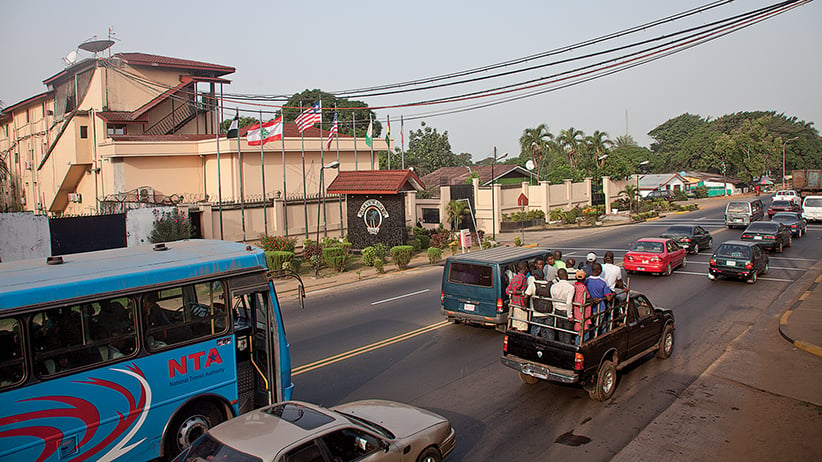 The more money you lose, the more attentive the waitresses become. This is a universal rule in casinos. Perhaps they are worried you will forget to tip them before your stack of chips disappears completely. As I sat at the blackjack table in a poorly lit, medium-sized room, at the back of a well-appointed hotel on the edge of Monrovia, the server never left my side, pouring almost as quickly as the dealer took my money.

West Africa would stretch from London to Moscow if overlaid on a map of Europe. It contains 18 countries, over a thousand languages and a population larger than that of the United States. A proper account of the complex transformations under way here would fill a shelf of books. Unfortunately, those books are mostly unwritten and entirely unread, as the region evades the notice of the wider world. Spend an evening at the Palm Spring Casino in Liberia, however, and many of those changes can be seen up close.

The room is not what you would expect in a country ranked among the five poorest in the world. It cannot be compared to the gaming houses of Monte Carlo, but you would find similar establishments just off the strip in Vegas. The carpet is a little worn, but the green felt on the roulette table is meticulously clean. The only “tell” that you are in West Africa is a chlorine handwashing station at the hotel entrance. These have become ubiquitous since the outbreak of Ebola.

At first the virus spread slowly in the sparsely populated bush on the Guinean-Liberian border. But when it reached the densely packed slums of Monrovia, it rapidly paralyzed the country. Borders closed, school was cancelled, even hospitals shut. For the first time since the civil war, the normally crowded nightclubs and cafés were empty in the evenings, after the government imposed a strict nationwide curfew.

President Ellen Johnson Sirleaf made an exception for the country’s two casinos. Members of the local Lebanese community, a small caste who form the backbone of the economy, own both. The Lebanese wealth and success is conspicuous compared with the surrounding poverty. Therefore, in return for protection and preferential treatment, they give the most powerful Liberians a cut of their deals. It is a pragmatic and symbiotic relationship found across West Africa.

The casino deals are likely lucrative ones. Before Ebola, Liberia enjoyed one of the fastest-growing economies in the world. Now, the World Bank estimates GDP growth has fallen to one per cent. Employment has fallen by more than a third. But business actually improved for establishments like the Palm Spring Casino. It is impossible to get a hotel room on short notice, as humanitarian relief workers continue to flood in, requiring air conditioning and satellite TV. They are easy to spot at the slot machines, wearing utility vests and small dispensers of hand sanitizer clipped to their belts.

Related reading: Ebola: The cure is worse than the disease

But they are not the only gamblers. At the table next to mine was a boisterous group of Chinese. The men played rapidly, smoking and staring intensely at their cards. Behind them their wives loudly crooned Mandarin pop songs into their umbrella drinks while swaying unsteadily to the music in their head. China’s move into Africa is one of the most dramatic (and least noticed) shifts in global geopolitics. Africa’s largest trading partner is now China (the United States trades at less than half the volume). The majority of China’s foreign aid is spent on building African stadiums and roads. They have come for minerals, oil and influence. Inside the casino, and outside, they are the biggest spenders and get most of the attention.

The unprecedented investment and resource boom in West Africa, even with Ebola, is driving some of the fastest economic growth in the world. But as GDP grows, there are increasing concerns that the poor are being left out. Poverty is declining, but not quickly, and inequality rates are growing. The Chinese project managers at the next table may be constructing massive new mines, but they also import Chinese labour. None of the Liberians in the casino are playing at the tables. They are working. And some preside over games where the minimum bet may be larger than their weekly salary.

The atmosphere in the casino, and the city, is optimistic. Ebola is waning. The government is reopening the borders and the schools. As the night progresses, the Lebanese owner arrives, discreetly speaking to the tuxedoed Romanian pit boss, who carefully watches the equally well-dressed Liberian croupiers. A month from now, the Chinese and Lebanese will still be there, but the American humanitarian workers will be gone, possibly replaced by some of the more adventurous Western investors who are slowly finding their way into frontier economies.

And the Liberian dealers and waitresses, standing straight and silent at the tables in their starched white shirts and crisp black bow ties, will still be patiently hoping some of those gaming chips are tipped to them.