A gift the Queen will wear (and you can buy)

Figuring out what to give a Queen who’s had the same job for 61 years and has everything she could ever want, must be excruciatingly difficult. No wonder so many dignitaries and governments give donations to charities in her name, though it must seem like getting a gift card, but without being able to shop for anything.

However Saskatchewan’s Lieutenant-Governor Vaughn Solomon Schofield, who met Queen Elizabeth II for the first time in London in October, struck the perfect balance. She presented Her Majesty with a donation in the name of the Queen of Canada to the Malala Fund, the charity started by Malala Yousafzai (the teen shot by the Taliban for daring to insist on an education) that, in its own words offers “girl-centric approaches to education that support the fund’s goal of creating a world where every girl reaches her true potential.”

As well, Schofield gave the Queen a more personal token of appreciation: a brooch created by local designer Rachel Mielke of the Hillberg & Berk jewellery line, who supports female-centred charities around the world. “As a young leader in our province, I felt that Rachel was the perfect artist to create a gift for our Queen, who has dedicated her life to public service and is an inspiration to women and girls around the globe,” Schofield stated on her official website.

“It was the highest honour any designer can achieve,” Mielke says. After first being approached by the lieutenant-governor, she spent a month looking at the regal wardrobe to find the “same realm of design aesthetic that she’ll wear.” Since the Queen dresses in vibrant colours so she’ll stand out in a crowd, Mielke created a brooch to match. Fortuitously she’d bought around 200 pieces of Madagascar tourmaline a few weeks previously, and knew that the myriad of colours ranging from mossy green to deep purple would be perfect accents. 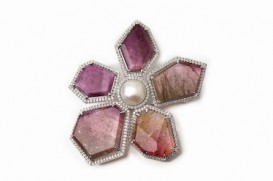 In the end, she created a contemporary flower design featuring five irregular petals of tourmaline in shades of pink, set into 18-karat white gold. Each petal is surrounded by diamonds—300 in total, with a white freshwater cultured pearl at the centre of the flower. It’s modern, but not too avant-garde for the 87-year-old monarch. The cost—$15,000 in total—was absorbed by the design firm.

And at the same time, Hillberg & Berk used the rest of the tourmaline to create a collection of 160 one-of-a-kind pieces, so customers can “own something in common with the Queen,” Mielke says. While it isn’t recreating the regal brooch, the pieces are influenced by that design. And it comes with a vice-regal seal of approval—the launch of its Legacy Collection was hosted by the lieutenant-governor at Government House. Though prices range up to $13,000, around half of the collection is already sold.

Though the Queen hasn’t worn the brooch publicly yet, there’s little doubt it will eventually show up. It’s the perfect piece of jewellery to pin on the pink-hued coats the Queen enjoys wearing. And there’s no doubt that the monarch was happy with the gift. Schofield told the designer that the Queen actually gasped when she saw the gift, and then examined it in detail. And for any designer, a lifetime in the royal brooch collection is its own priceless treasure.