Scenes From My Low Expectations 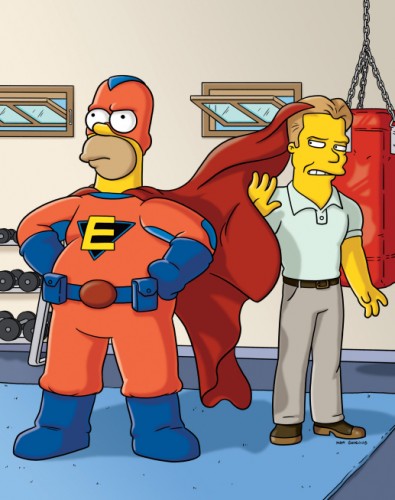 Maybe it’s because I had low expectations or because it was an island in a sea of Seth MacFarlane, but I actually enjoyed the Simpsons season premiere quite a lot. I didn’t know until afterward that it was written by Seth Rogen and Evan Goldberg (you know how it is, sometimes you turn away in the precise moment when they’re showing the writing credit), but I did feel like there was something a little different about the “voice” of this episode from most recent episodes. That’s not to say that they brought anything terribly original to the table, and certainly not to presume to guess how much of their work actually remained in the final version, but the episode was short on horrendous puns and self-referentiality, had a story that made sense, and even a few “screw the audience” jokes that felt like they could have come out of season 6 (the scene that seems to be building to a studio buying Comic Book Guy’s creation, only to reveal that another studio already bought it weeks ago).

That’s damning with faint praise, but The Simpsons is never going to produce episodes as great as its best seasons in the ’90s; what we can hope now is that it will produce scripts that don’t fall apart halfway through. The show has enough going for it that if it has a decent script, it can produce an entertaining episode. Again, I think that part of the rapturous critical reaction to the Simpsons movie — a reaction that now seems overblown — was simply relief at encountering an entire Simpsons script without any B-quality material. The puns and other corny devices that had plagued the show were mostly absent in the movie; it didn’t compare (even the quality of animation, believe it or not) with the best TV episodes,  but it felt like it was subject to quality control. The show has cut back a bit on the cheap jokes since then, but most episodes still leave me with the feeling that a terrible joke could come at any moment and, worse, that if there is a terrible joke, there won’t be a good one along in a few seconds to make up for it. So while I will not claim that this new episode was great, it did make me relax and feel like I was in for a string of competently-crafted jokes. That seems like a lot nowadays.