Sentimental travels in 'Away We Go' and 'Departures' 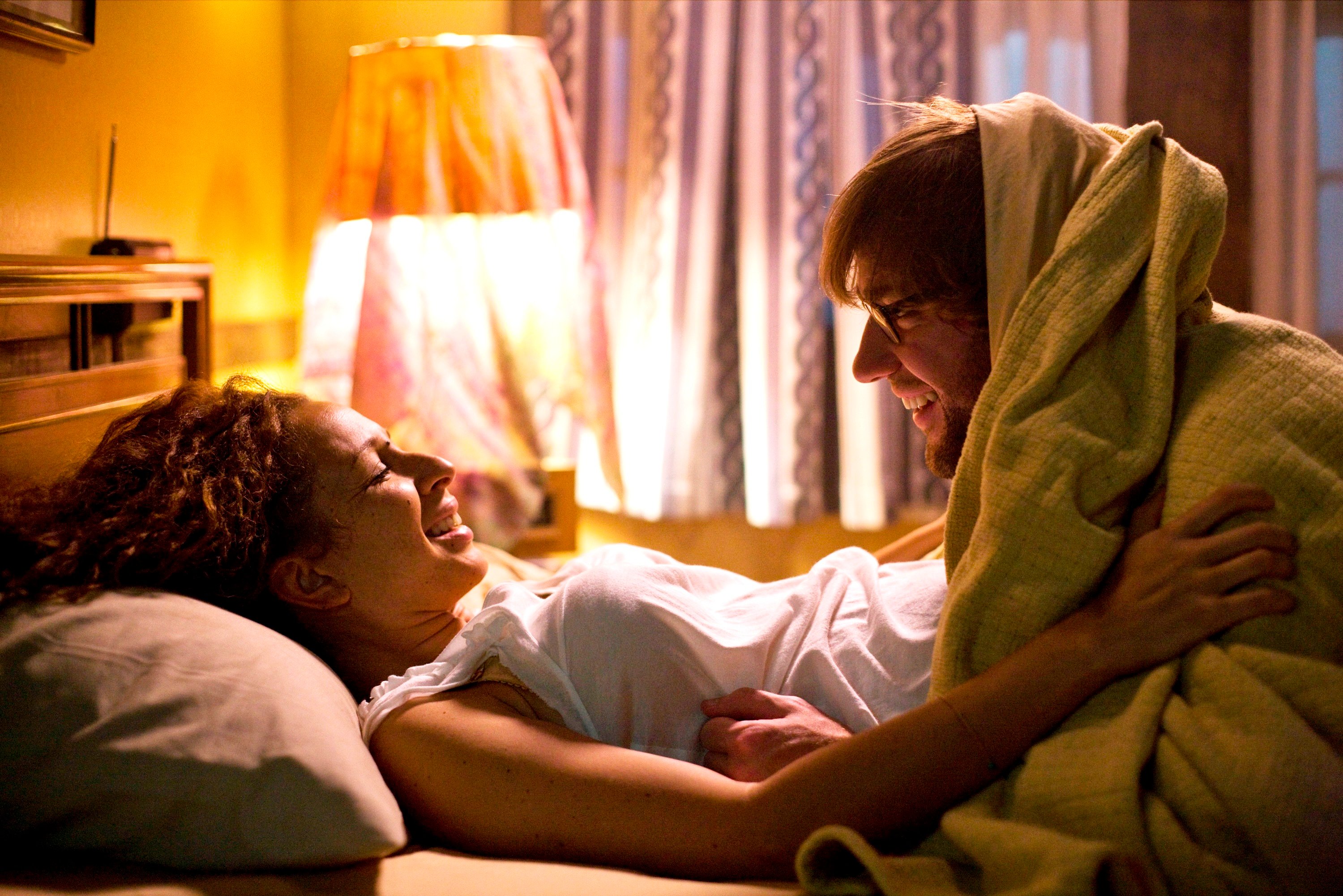 Maya Rudolph and John Kranzinsky in 'Away We Go,' a comedy by Sam Mendes

Take your pick of sentimental journeys this week, one about birth rituals, the other about death rituals. Away We Go follows a thirtysomething couple on a pregnancy road trip through American parenting styles; Departures is about a laid-off Japanese musician who takes a job as a ceremonial mortician. I recommend the American option, with some reservations. Oddly enough, it’s less Hollywood-like than the Japanese film.

Sam Mendes, a.k.a. Mr. Kate Winslet, is a British director who has made his career painting stylized portraits of the moral bankruptcy in America. His films have ranged from American Beauty (1999), the tragedy of a suburban family torn asunder by adultery and depression, to Revolutionary Road (2008), the tragedy of a suburban couple torn asunder by adultery and depression. And in between, he made an American gangster movie (Road to Perdition) that played like Greek tragedy, and an American war movie (Jarhead) about purgatory in the Persian Gulf. Unlike his Brit compatriots Mike Leigh and Ken Loach, who find ample fodder for depression without ever leaving working-class England, Mendes is not a realist. His films are stylized and sexy, and the road to perdition is slippery with sin. But that’s the way foreigners like to see America—as a mythic theme park of moral and political extremes.

However, Away We Go, the latest film by Mendes, marks a significant change in pace. It’s still a theme park ride through American archetype—literally, because it unfolds as a transcontinental road trip that takes us from Phoenix to Miami, touring cultural attitudes about parenting. But this is the director’s first outright comedy. Based on a script by novelist Dave Eggers (A Heartbreaking Work of Staggering Genius) and his wife, Vendela Vida, it’s a boldly unconventional romantic comedy, one that turns the genre inside out. The script is smart and witty, the leads are amiable, and the movie rides on an air-cushion of minimalist, folk music that made me think it wants to be the next Juno. Even the crayoned style of the poster is reminiscent of Juno. And I guess what they have in common is a beguiling world of adult innocence.

But like Mendes’ other films, this one places its characters in a contrived American Gothic landscape. Because it’s a comedy, that may be more forgivable, and I have to admit there are a lot of laughs. But as much as I found myself being entertained by the comedy, and occasionally moved by the romance, I was unconvinced by the movie.

Away We Go is the story Burt and Verona, a thirtysomething couple expecting their first child. Played by John Krasinski (The Office) and Maya Rudolph (Saturday Night Live), they are the stable hub of the story, which spins around them like a merry-go-round. Six months into Verona’s pregnancy, Burt’s parents—played by Jeff Daniels and Catherine O’Hara in a hilarious scene—announce that they are moving to Belgium for two years. Verona’s parents are dead. So that leaves the couple in a quandary, wondering where they will find support and guidance in starting a family. So off they go on a road trip to four America cities—plus Montreal—looking up friends and relatives who might help, and hoping to find the ideal place to settle down.

Unlike Mendes’ other films, this is not a tale of rot and betrayal at the heart of American romance. It doesn’t even have the typical rom-com ups and downs. Burt and Verona never fall in or out of love with each other, or stray with other partners. They never suffer a romantic crisis of any sort. Oddly un-glamourous, they don’t look or act like movie stars. They are, however, lovely and cute together in an ordinary way. They make a charming Everycouple, even if their roles are overly typical: she’s whiny and insecure, and he’s the rock-solid guy who gets all the script’s best lines, continually reassuring while showing off his wit— “I’ll always love you if you gain so much weight I can’t find your vagina.”

The movie unfolds as a kind of parenting playlist of lifestyle options—roads explored but ultimately not taken. In Phoenix, the couple goes to the dog races with a former colleague of Verona’s, played by Allison Janney , who’s one mother of a mother, a brash, uncontrolled hyena of unrepressed independence, and a paragon of everything that’s tasteless about America. Then on to Tuscon to bond with Verona’s beautiful sister (Carmen Ejogo), where the two girls have an intimate moment together in a bathtub showroom. The satire peaks in Wisconsin, where Burt reconnects with his childhood “cousin” (Maggie Gyllenhaal), a New Age purist whose neo-feminist dogma includes a ban on the “3 S’s”—separation, sugar and strollers. Quoting Simone de Beavoir, she enforces a policy of sleeping in the same bed as their children, and making love in the open. This burlesque vision of “free” parenting sets up the film’s most hysterical scene. But the oddest tangent is the trip to Montreal, which is portrayed as a super-tolerant, rainbow-hued utopia of adopted children, fabulous music, and endless partying. With no sign of anyone speaking French.

At that point, I began to realize why I’d been resisting the film all along, in spite of its dogged charm. None of the places the couple visit seems remotely real. They’re all stylized tableaux of symbolic lifestyles. Sam Mendes didn’t write this movie—he doesn’t write any of his movies—but this one turns out to be another Mendes theme park of crassly American values that are revealed to be crassly transparent, and masking a deep unease. What makes the movie enjoyable is the firm commitment of the couple at its core, and the appeal of the two leads. But the world they move through, like alienated tourists, feels more like a magazine article about bad parenting than a coherent narrative. I do admire Away We Go‘s subversion of traditional rom-com formula, but it surrenders to a trendier formula: narrative by music video. Emotion is driven home, sometimes literally, by a set of original songs full of aching beauty that are thrust into the foreground—precious acoustic guitar numbers composed and performed by Alexi Murdoch, who I’m told lives in rugged isolation on the west coast of Scotland. Lucky him. In the end, the story’s omnibus rite of passage adds up to a mere distraction, something to be shed and discarded like a bad vacation. All along, as it turns out, the film has been no more than a mood piece. After all the off-road detours into broad comedy, Mendes delivers us to our romantic destination, and finds a place in the heart that feels honest and real. But I’m not so sure if the journey was entirely worth it. 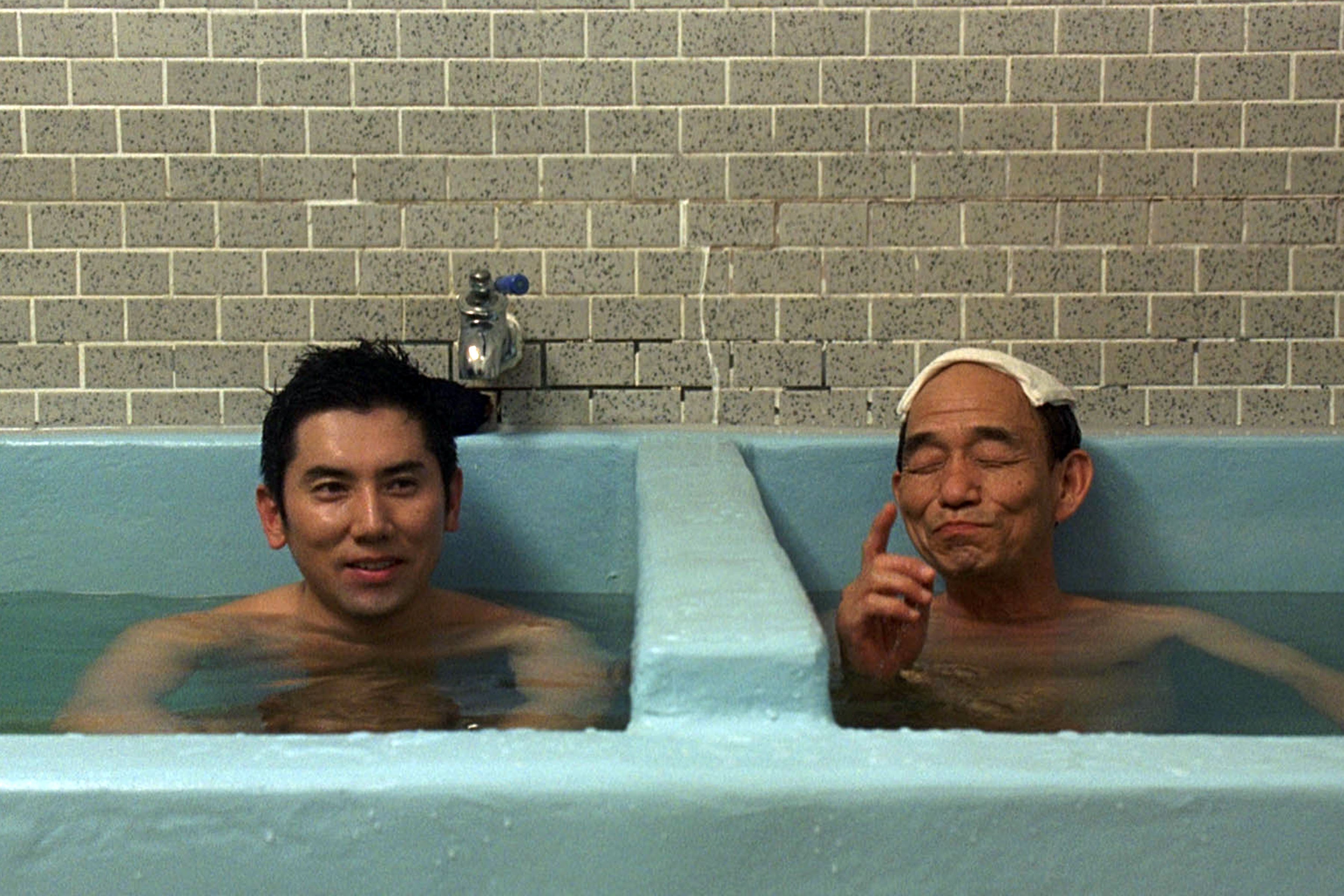 There was a fair bit of consternation when the best foreign language film was announced at the 2008 Academy Awards. Most of us were expecting the Oscar to go to The Class or Waltz With Bashir. Instead it went to a then unknown Japanese film called Departures, which is finally being released in Canada. Now that I’ve seen it, I think the Academy has yet another injustice to atone for. Not that it’s such a bad film. But it’s the kind of picturesque, broadly sentimental confection that tends to catch Oscar’s eye in the foreign language category, and it’s certainly not in the same league as the two contenders I just mentioned.

Directed by Yojiro Takita, Departures is the story of Daigo (Masahiro Motoki), a cellist who discovers a new vocation after his Tokyo symphony orchestra is disbanded. With his wife Mika (Ryoko Hirosue), he goes back to his hometown to live in his late mother’s house, which doubled as a pub. There, answering a classified ad for a job in “departures,” which he assumes involves some kind of travel agency, he ends up working in the business of “encoffination”—the ceremonial cleansing and preparation of bodies before cremation. The company’s aging owner, the laconic Sasaki (Tsutomu Yamazaki), is looking for a successor to carry on the business, and he gives Daigo an offer he can’t refuse. At first Daigo is, well, mortified by the thought of handling dead bodies. And even after he adjusts to the job, and develops respect for its traditions, he’s still too ashamed to tell his wife what he does for a living.

The ritual, which takes place in front of the family members of the deceased, has an exotic beauty, especially the first time we see it performed—on the body of an exquisitely beautiful young woman, who is actually a young man in drag. As the mortician divests the corpse of its clothes and washes the body under the cover of a satin sheet,  without revealing an iota of skin, it’s like watching a magic trick. A kimono is slipped off like a tablecloth pulled away with the place-settings intact.

But  the encoffination ritual has a subtlety and grace that’s lacking in Takita’s direction, which lays down the narrative with slow, heavy brushstrokes of lacquered whimsy. You can’t blame  the actors. In the lead role, Masahiro performs with the touch of a musician who treats the world as an instrument to be handled with tender precision, while Yamazaki conveys a droll, deadpan wisdom as the mortician who loves nothing better than a succulent meal, and appreciates the living he has earned by dressing up the dead. But the wife is a wan, underwritten sylph. And as Daigo’s story is compressed into the inevitable coming-to-terms with the long-lost father who abandoned him as a child, it all gets terribly earnest. The absurdly lush soundtrack, reminiscent of Hollywood at its worst, is especially cloying, which seems unforgivable given the importance of music in this tale of a cellist who gives up then rediscovers his instrument. Amid the snowflakes and cherry blossoms and rhapsodic landscapes, the whole film starts feel encoffinated by a lethal overdose of beauty and sentiment.