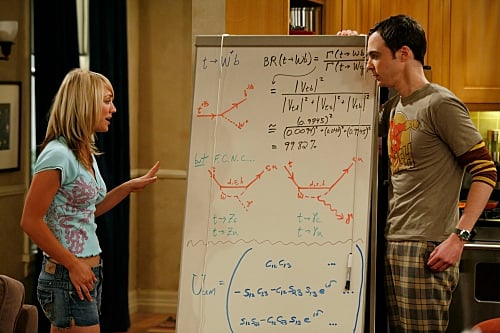 I have to admit that I’m enjoying The Big Bang Theory more than How I Met Your Mother this season, at least overall. (TBBT has no depth whatsoever, so it’s impossible for it to come up with an individual episode that’s as good as HIMYM’s “Shelter Island.”) What makes the show consistently entertaining is, as everyone knows, the character of Sheldon (Jim Parsons); but more importantly, it’s the relationship between Sheldon and Penny (Kaley Cuoco) that has become the hit of this show. I’ve theorized in the past that comedies, more than any other type of show, depend heavily not on individual characters but on character relationships; a comedy should have at least one character relationship that is so strong that we are actually happy, filled with anticipation, when those two characters have a scene together. For some reason, Sheldon/Penny has become that kind of relationship; along with Liz and Jack on 30 Rock it may be the best comedy relationship on TV at the moment. As we saw in last night’s episode, they have a strange combination of antagonism and mutual respect. She’s annoyed by his insanity and the fact that his friends are too wimpy to stand up to him, but likes the fact that he doesn’t treat her like a bimbo; he’s angered by the way she messes up the sacred routines of his lifestyle, but admires her for not being intimidated by him. Their scenes together are a nice reminder that the best male-female relationships often have nothing to do with sexual tension — since their relationship would not work if Sheldon was sexually attracted to her (or, for that matter, in any human).

On the other hand, Leonard has clearly become the weakest link on TBBT. (The weakest character should have been Penny, who was the weakest character when the show began, but the Sheldon scenes have turned her into a popular character — sort of like Tracey on 30 Rock has been saved from annoyingness by his excellent chemistry with Kenneth.) He doesn’t do much more these days than stand around whining that everybody else is acting crazy.