Sitcoms: Triumph of the Linear 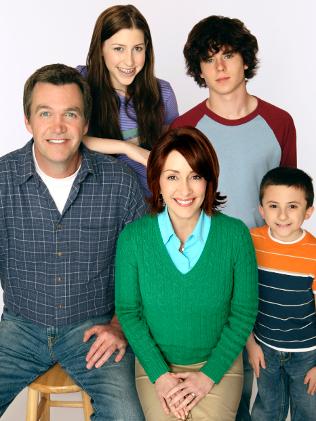 “The Middle” was always going to get picked up for a third season (it’s doing quite well in a difficult time slot), but I’m glad ABC showed its confidence in it by making it one of the shows that got an early renewal (along with Modern Family, Cougar Town, Private Practice, and so on). It’s by far my favourite comedy in ABC’s Wednesday lineup, and probably the comedy I find the most solid and satisfying — it doesn’t hit the heights of some other shows, but it doesn’t have many weak links, either.

So many comedies at the moment are “yes, but” shows: yes, but they’re wildly uneven, yes, but this or that character is weak, yes, but they’re preachy and heavy-handed at times, yes, but there’s too many romantic subplots. The Middle has a narrow focus that appears to be getting narrower as it goes on: the most recent episode had a very simple story and only a small “B” story that felt very well integrated with the primary plot. The five main characters are all funny without being completely unreal, and the Neil Flynn character, in particular, is one of my favourite current characters. Most TV comedy characters are basically written as overgrown children, and he’s not. He’s not a boring paragon of virtue either, even though he can sound that way when he’s described; as written, and especially has played, he’s one of the few male characters around who is both eccentric (which comic characters need to be) and recognizably a grown-up. Plus the most recent episode offered one of my favourite comedy lines: Patricia Heaton and Flynn, satisfied that they’ve finally gained control of their kids, go out to see “The Little River Band Cover Band.” That line sounds funny and gets funnier every time it’s repeated, it’s a pop-culture joke, and it’s also a character joke about who these people are, what generation they’re from, and what entertainment they can afford.

The show that follows The Middle, Better With You, isn’t in that league, but it’s getting slowly, slowly better. Surprisingly, the strongest link in the cast is the guy I originally thought was just there to be the pretty young guy, Jake Lacy. The writers have actually figured out how to give him lines that are funny without being generic wisecracks. It’s still uneven, not just from episode but from scene to scene, but I root for it, partly because it’s the only four-camera comedy outside CBS (and therefore is in a very difficult position in an otherwise all-single-camera lineup) but mostly because it just has an air of likability and a sense that it’s getting better rather than worse. Between The Middle‘s strength and watching BWY’s slow and conscientious crawl toward self-improvement, I enjoy this lower-rated hour in ABC’s comedy lineup more than the Modern Family/Cougar Town hour. (Actually, The Middle and even BWY got more total viewers than Cougar Town last week, though that doesn’t matter in terms of 18-49 ratings and doesn’t prove anything bad about Cougar Town. I just bring it up to note that The Middle is even more popular than its pretty good 18-49 ratings would suggest.)

Now, here’s what the subject heading’s about: The Middle and BWY are examples of how non-linear storytelling seems to be quietly falling out of fashion in TV comedy, after being the biggest thing ever for only a few years. Better With You began as a How I Met Your Mother imitator in terms of style (they still have their share of knockoff moments), including lots of flashbacks and cutaways. These have been toned down to the point that they were almost nonexistent in the last episode I saw. The Middle also started out looking like it was going to play more temporal games than it eventually did; it has the voiceover and the slightly stylized fish-eye look, but tends to be a regular single-camera domestic sitcom in the way the scenes play out.

Then you have Community, which explicitly refuses to do flashbacks or cutaways — the creator assumes, rightly, that if you combined that with all the pop-culture references and gimmick episodes it would be too much. Cougar Town is a much more linear and straightforward show than the same creator’s Scrubs. Flashbacks, framing devices, starting at the end and ending at the beginning — all these things seemed to be the future of the sitcom only a few years ago, when every single-cam wanted to be 30 Rock and every multi-cam was hoping to be cool like How I Met Your Mother. Now those two shows seem almost like the beneficiaries of grandfather clauses in terms of style: the new fashion is to be restrained and let the viewer feel like there’s nothing coming between them and the scene. Hence voice-overs, which were huge in the late ’00s, are out of fashion (though The Middle actually makes decent use of it), Modern Family rewrote its original script to eliminate direct references to the documentary framing device, and Raising Hope‘s style seems downright austere compared with the creator’s My Name Is Earl. The only outright flop among this season’s new comedies, Running Wilde, was the most gimmicky of the bunch; that’s not why it flopped, but the fact that it flopped sure does help this narrative.

Still, it’s only a narrative, based on the inevitable cycles of Hollywood comedy style. (Other things that network execs think are cool for the moment: family comedies, comedies about men lost in a woman’s world, and of course, single-camera.) The pendulum will swing back very soon. It’s like in the ’40s in Hollywood movies: after the non-linear Citizen Kane became a favourite movie of everyone in the industry, movies started using flashbacks to an almost unprecedented extent, with many films choosing the flashback structure for no apparent reason or even having flashbacks within flashbacks within flashbacks. TV insiders who suddenly decided we all wanted new and experimental story structures have now decided, just as suddenly, that we all want simplicity. What will their next decision be? I hope it’s cutting down on B stories. I’m mostly getting tired of those things.

FILED UNDER: Better With You The Middle